Gravitational settling chambers are generally used to remove large, abrasive particles (usually >50 µm) from gas stream. It provides enlarged areas to minimize horizontal velocities and allow time for the vertical velocity to carry the particle to the floor. The usual velocity through settling chambers is between 0.5 to 2.5 m/s.

Disadvantage: Requires larger space and efficiency is low. Only larger sized particles are separated out.

Design of a gravitational settling chamber

If we assume that Stokes law applies we can derive a formula for calculating the minimum diameter of a particle collected at 100% theoretical efficiency in a chamber of length L.

Solving for dp gives an equation that predicts the largest-size particle that can be removed with 100% efficiency from a settling chamber of given dimension.

(2.2.4)  Where, Fc=centrifugal force, N; Mp=particulate mass, Kg; Vi equals particle velocity and R equals radius of the cyclone, m/s. From this equation, it can be seen that the centrifugal force on the particles, and thus the collection efficiency of the cyclone collector can be increased by decreasing R. Large-diameter cyclone have good collection efficiencies for particles 40 to 50 µm in diameter.

In a fabric filter system, the particulate-laden gas stream passes through a woven or felted fabric that filters out the particulate matter and allows the gas to pass through. Small particles are initially retained on the fabric by direct interception, inertial impaction, diffusion, electrostatic attraction, and gravitational settling. After a dust mat has formed on the fabric, more efficient collection of submicron particle is accomplished by sieving. Filter bags usually tubular or envelope-shaped, are capable of removing most particles as small as 0.5µm and will remove substantial quantity of particles as small as 0.1µm. Filter bags ranging from 1.8 to 9 m long, can be utilized in a bag house filter arrangement.  As particulates build up on the inside surface of the bags, the pressure drop increases. Before the pressure drop becomes too severe, the bag must be relieved of some of the particulate layer. Fabric filter can be cleaned intermittently, periodically, or continuously.

Fabric and Fibre Characteristics: Fabric filter may be classified according to filtering media: woven fabric or felt cloth. Woven fabrics have a definite long range repeating pattern and have considerable porosity in the direction of gas flow. These open spaces must be bridged by impaction of interception to form a true filtering surface. Felted cloth consists of randomly oriented fibres, compressed into a mat and needled to some loosely woven backing material to improve mechanical strength. The choice of fabric fibre is based primarily on operating temperature and the corrosiveness or abrasiveness of the particle. Cotton is the least expensive fibre, and is preferably used in low temperature dust collection service. Silicon coated glass fibre cloth is commonly employed in high temperature applications. The glass fibre must be lubricated to prevent abrasion. All fibre may be applied to the manufacture of woven and felt type fabrics.

Fabric Filter System: Fabric filter systems typically consist of a tubular bag or an envelope, suspended or mounted in such manner that the collected particles fall into hopper when dislodged from fabric. The structure in which the bags are hanged is known as a bag-house.

Generally, particle laden gas enters the bag at the bottom and passes through the fabric while the particles are deposited on the inside of the bag. The cleaning is accomplished by shaking at fixed intervals of time . Advantage: Fabric filters can give high efficiency, and can even remove very small particles in dry state.

Disadvantage: High temperature gasses need to be cooled. The flue gasses must be dry to avoid condensation and clogging. The fabric is liable to chemical attacks.

The electrostatic precipitator is one of the most widely used device for controlling particulate emission at industrial installations ranging from power plants, cement and paper mills to oil refineries. Electrostatic precipitator is a physical process by which particles suspended in gas stream are charged electrically and, under the influence of the electrical field, separated from the gas stream.

The precipitator system consists of a positively charged collecting surface and a high voltage discharge electrode wire suspended from an insulator at the top and held in passion by weight t the bottom. At a very high DC voltage, of the order of 50kV, a corona discharge occurs close to the negative electrode, setting up an electric field between the emitted and the grounded surface .   The particle laden gas enters near the bottom and flows upward. The gas close to the negative electrode is, thus, ionized upon passing through the corona. As the negative ions and electrons migrate toward the grounded surface, they in turn charge the passing particles. The electrostatic field then draws the particles to the collector surface where they are deposited. Periodically, the collected particles must be removed from the collecting surface. This is done by rapping or vibrating the collector to dislodge the particles. The dislodged particles drop below the electrical treatment zone and are collected for ultimate disposal .

Wet scrubber removes particulate matter from gas streams by incorporating the particles into liquid droplets directly on contact. The basic function of wet scrubber is to provide contact between the scrubbing liquid, usually water and, the particulate to be collected. This contact can be achieved in a variety of ways as the particles are confronted with so-called impaction target, which can be wetted surface as in packed scrubbers or individual droplets as in spray scrubbers .

The basic collection mechanism is the same as in filters: inertial impaction, interception and diffusion. Generally, impaction and interception are the predominant mechanism for particles of diameter above 3 µm, and for particle of diameter below 0.3µm diffusion begins to prevail. There are many scrubber designs presently available where the contact between the scrubbing liquid and the particles is achieved in a variety of ways. The major types are: plate scrubber, packed-bed scrubber, spray scrubber, venturi scrubber, cyclone scrubber, baffle scrubber, impingement-entrainment scrubber, fluidized-bed scrubber.

It contains a vertical tower containing one or more horizontal plates (trays). Gas enters the bottom of the tower and must pass through perforations in each plate as it flows countercurrent to the descending water stream. Collection efficiency increases as the diameter of the perforations decreases. A cut diameter, that collected with 50% efficiency, of about  µm aerodynamic diameter can be achieved with 3.2-mm-diameter holes in a sieve plate. 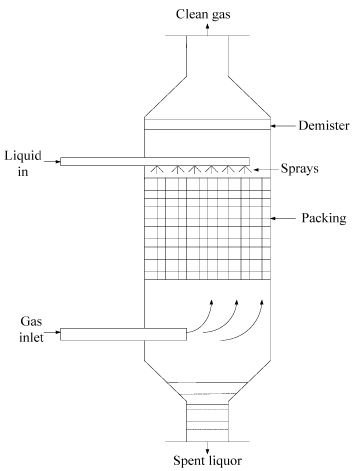 Particles are collected by liquid drops that have been atomized by spray nozzles. Horizontal and vertical gas flows are used, as well as spray introduced co-current, countercurrent, or cross-flow to the gas.  Collection efficiency depends on droplet size, gas velocity, liquid/gas ratio, and droplet trajectories. For droplets falling at their terminal velocity, the optimum droplet diameter for fineparticle collection lies in the range 100 to 500 µm.  Gravitational settling scrubbers can achieve cut diameters of about 2.0 µm. The liquid/gas ratio is in the range 0.001 to 0.01 m3/ m3 of gas treated.

A moving gas stream is used to atomize liquids into droplets. High gas velocities (60 to 120 m/s) lead to high relative velocities between gas and particles and promote collection.

Drops can be introduced into the gas stream of a cyclone to collect particles. The spray can be directed outward from a central manifold or inward from the collector wall.

Entrainment Scrubber: The gas is forced to impinge on a liquid surface to reach a gas exit. Some of the liquid atomizes into drops that are entrained by the gas. The gas exit is designed so as to minimize the loss of entrained droplets.

A zone of fluidized packing is provided where gas and liquid can mix intimately. Gas passes upward through the packing, while liquid is sprayed up from the bottom and/or flows down over the top of the fluidized layer of packing .