Ovary: The basal part, contains ovules. After fertilization ovary turns into fruit and the ovule into seed.

Stigma: The uppermost part; it is a device to trap the pollen.

Style: The stalk of stigma and connects the stigma & ovary. 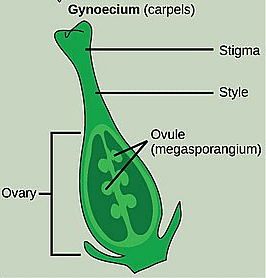 Fertilized ovule is called seed which contains zygote which develops into embryo and then into new individual. Endosperm serves as a nutritive tissue. Outer and innner integument of the ovule after fertilization are called testa and tegmen. In the dicot embryo The uper feathery end is called plumule which develops into stem. The lower pointed end is called radicle which develops into root. Lateral appandages of the axis is called Cotyledons (2 in dicots and one in monocots). In monocot embryo The cotydedon is sheild shaped and called scutelum. The plumule and radicle is covered by individual sheath called coleoptile and coleorhiza respectively. Germination is the process by which the dormant embryo (within the seed) wakes up.

A seed normally can be stored for long durations but it germinates if supplied with adequate water, air or oxygen and suitable temperature. Such seeds are called quiescent.If a seed fails to germinate in the presence of one or more of the above named optimum conditions, it is called dormant, and the property of failure of a seed to germinate in the presence of optimum conditions is called dormancy.

One cause of seed dormancy is hard seed coats impermeable to water and oxygen, e.g. in legumes, mustard and pigweed. In Orchids and Ginkgo, dormancy is because of partially developed embryos. In pines, apples, peaches and lettuce, dormancy is due to physiological reasons. Dormancy in some seeds is due to presence of chemical inhibitors (e.g. abscisic acid, coumarin, ferulic acid and some phenolic acids) in the seed itself.

The matured and ripened ovary after fertlization is called fruit. When a fruit does not arise from ovary but arises from some other floral part it is called pseudocarp. Example: Apple (Thalamus) and Dillenia (from Calyx), Cashewnut (Peduncle & Thalamus). Wall of the ovary is called Pericarp in which outer one is called Epicarp middle one Mesocarp and inner one is called Endocarp.

Loss of excess water by the plants in the form of vapour through the aerial parts is called transpiration. Mainly three types of transpiration are observed—

Among these 3, stomatal transpiration accounts for the major parts of water which is transpired off.  Stomatas are epidermal, microscopic pores guarded by two kindney shaped cells called guard cells. 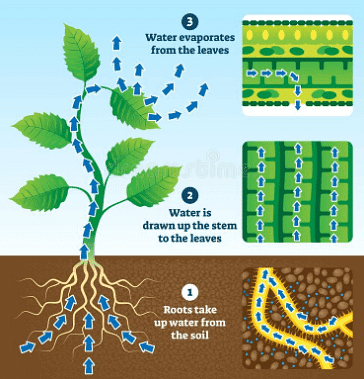 Fig: The mechanism of transpirationA reverse sequence of events in the dark, results in the closing of stoma.

Advantages of transpiration are:

(a) removal of excess water.

(b) increase in rate of absorption.

(c) absorption and distribution of minerals.

(e) utilization of latent heat to make the plants cool.

But excess transpiration is considered to be fatal for the plants. Some adaptation are seen in plants (particularly in xerophytes) to check excess transpiration such as- reducaiton of surface area of leaves, rolling up of leaves. thick cuticle. multiple epidermis. sunken stomata, etc. Guttation (exudation of water) as opposed by transpiration is a process of loss of water in the form of water through hydathodes-the pore through which water excludes). Guttation mainly takes place during the night and water comes out this way contains dissolved minerals.

In hot sunny days, extra-ordinarily high rates of transpiration are found to result in water deficit in the aerial parts (thereby causing drooping of aerial parts) of the plants. This is known as wilting.

(i) Temporary wilting occurs when there is sufficient water in soil but rate of transpiration exceeds the rate of water absorption by a plant. This situation normally occurs in the summers at noon or for some time in the afternoon. It is because there is already adequate amount of moisture in the soil and the roots are not able to absorb water at the same rate at which aerial parts are losing water due to transpiration. However, we can recover the plant from temporary wilting by somehow reducing the rate of transpiration.

The simplest method shall be to sprinkle water on the aerial parts of the plant (overhead irrigation).

(ii) Permanent wilting occurs due to deficiency of water in soil. This type of wilting is said to be permanent only in the sense that the wilted plant will not recover until water is added to soil. If water is not added to soil, the plant would eventually die due to desiccation. The wilting, in general, is harmful for the plants. It results in stomatal closure result-ing in carbon dioxide deficit to the plant causing a decline in photosynthesis and other metabolic processes. The overall growth of the plant gets reduced, and plant dies ultimately.

Conversion of light energy into chemical energy by biological system is called photosynthesis in a generalised way. In the process CO2 is reduced to organic compounds using H2O as a source of hydrogen (not in bacteria) and light energy with chlorophyll containing cells. All living forms depend upon this process directly or indirectly.O2 comes out as a split product of H2O which goes to atmosphere (not in bacteria) and purify the atmosphere. In case of green plants, usually Carbon dioxide is taken from the atmosphere through stomata and water from the soil. In case of photosynthetic bacteria Hydrogen Sulphide (instead of water) is supplied by its surroundings. 2 (NADPH + H+) and 3 ATP are needed to reduce one molecule of Carbon dioxide In case of bacte-ria, bacteriochlor-phyll is present instead of chlorophyll and Hydro-gen sulphide acts as hydrogen donor. Hence sulphur is the by-product instead of Oxygen.

Rate of pho-tosynthesis is highest in red light and lowest is green light. (i.e., zero)