The document Pascal's Law, Buoyancy and Archimedes Principle Class 9 Notes | EduRev is a part of the Class 9 Course Science Class 9.
All you need of Class 9 at this link: Class 9 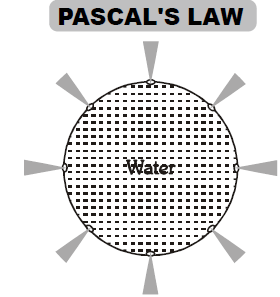 BUOYANCYWhen a body is partially or wholly immersed in a liquid, an upward force acts on it which is called upthrust or buoyant force. The property of the liquids responsible for this force is called buoyancy.

Buoyancy is a familiar phenomenon : a body immersed in water seems to weigh less than when it is in air. When the body is less dense than the fluid, then it floats. The human body usually floats in water, and a helium filled balloon floats in air.

It is a common experience that when a piece of cork is placed in water it floats with two-fifth of its volume inside water. If the cork piece is pushed into water and released it comes to the surface as if it has been pushed by someone from inside due to the buoyant force exerted by fluid. 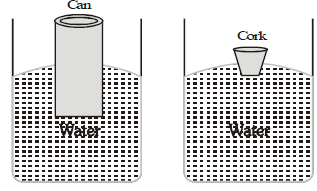 Factor on which buoyancy depends :- |Upthrust depends upon the following two factors :

(a) The volume of the body submerged in the fluid. :- It is found that greater the volume of a body greater is the upthrust it experience when inside a fluid.(b) The density of fluid in which the body is immersed :- It is also found that greater the density of the fluid greater is the upthrust it applies on the body.Effect on buoyancy :-When a body is partially or fully immersed in a fluid, then following vertical forces are experienced by it.(a) Its weight (W) acting vertically downwards through the centre of the body.(b) Force of buoyancy (U or B or FB) or upthrust, acting vertically upwards through the centre of gravity of the body.The following three cases arise :-

(1) When W < U, the body floats : In this case the body will rise above the surface on the liquid to the extent that the weight of the liquid displaced by its immersed part equals the weight of the body. Then the body will float with only a part of it immersed in the liquid. In this case Vrg < Vsg or r < s. Thus if a cork, which has a density less than that of water will rise in water till a portion of it is above water. Similarly a ship floats in water since its density is less than the density of water.

(3) When W = U :- The resultant force acting on the body when fully immersed in the fluid is zero. The body is at rest anywhere within the fluid. The apparent weight of the body is zero for all such positions.Thus, we find that a body will float when its weight is equal to the weight U of the fluid displaced i.e. the upthrust.

Experimental verification of archimedes principle :-Consider a container C1 filled with water upto the level from where pipe P extends out. The other end of pipe P opens to a small container C2 placed on a weighing balance which measure 00.00 [after the placement of the container C2]. A block B hangs on a spring balance S which shows a reading of 7 kg.

(a) If we partially immerse the block in water we observe some water flows out from C1 to C2 through P. The weighing machine shows a reading 1 kg and the loss of reading in spring balance is 7 - 6 = 1kg. This means that weight of water displaced by the block is equal to loss in weight of block.

(c) What happens when the block is further immersed? No more water will be displaced by the block and therefore reading shown by weighing machine and spring balance remains unchanged. 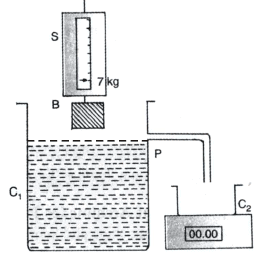 Buoyant force ∝ volume of liquid displaced (V). If two bodies of different material have same volume, the buoyant force acting on them, when completely immersed in water, is same.Instead of water if we take a liquid lighter than water then the volume displaced by the block on complete immersion will be the same but the buoyant force will be less. This is because the density of lighter liquid is less than that of water.We know that Density =

Mass = Density � VolumeFor lighter liquids, the mass of the liquid displaced is less even when the volume displaced is the same. 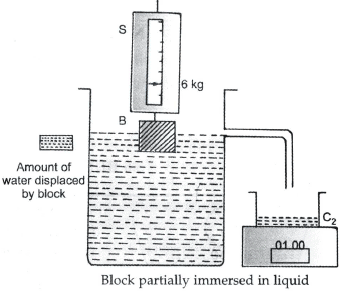 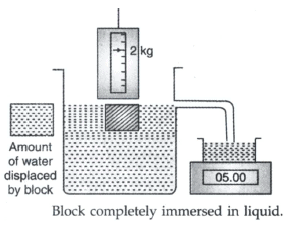 The above facts has been summarised in Archimedes principle which states that the upward force acting on a solid body which is partially or completely immersed in a fluid, is equal to the weight of the fluid displaced.

This upward force is called buoyant force or upthrust.

1. In designing ships and submarines.

2. Lactometer is based on the Archimedes principle. It is used to determine the purity of a sample of milk.

3. Hydrometer is also based on the Archimedes principle. It is used to determine the density of liquids.

(a) Ships :Although it is made of iron and steel which are materials denser than water a ship floats in water. This is due to the fact that a floating ship displaces a weight of water equal to its own weight including that of the cargo. The volume of the ship is much larger than the volume of the material with which it is made. Since the empty space in the ship contains air therefore its average density is less than the density of water. Thus a ship floats with a small section under water.

A ship has to move in waters of different seas which have different densities. As a result it sinks more in water with less density than in water with more density. Therefore ships are marked with white lines on its sides called load lines of pimsoll marks. The load lines (called tha Plimsoll mark) on the side of a ship of a ship show how low in the water it can lie and still be safely and legally loaded under different conditions.

(b) Submarines :A submarine, figure sinks by taking water into its buoyancy tanks. Once submeged, the upthrust is unchanged but the weight of the submarine increases with the inflow of water and it sinks faster. To surface, compressed air is used to blow the water out of the tanks.