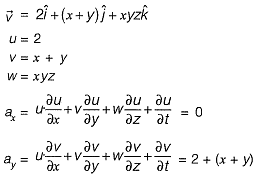 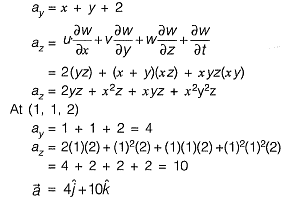 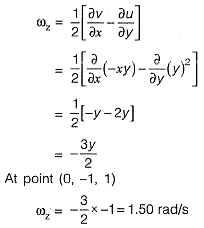 Question 3.  The velocity components of a two dimensional plane motion of a fluid are

Hence, flow is irrotational.Question 4.  A nozzle is so shaped that the average flow velocity changes linearly from 1.5 m/s at the beginning to 15 m/s at its end in a distance of 0.375 m. The magnitude of the convective acceleration (in m/s2) at the end of the nozzle is _______     [2015 : 1 Mark, Set-II]Solution: Convective acceleration

Question 5. In a two-dimensional steady flow field, in a certain region of the x-y plane, the velocity component in the x-direction is given by vx = x2 and the density varies as

Which of the following is a valid expression for the velocity component in the y-direction, vy?(a) 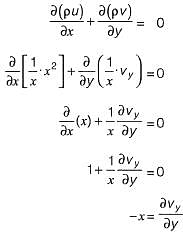 ⇒Magnitude of acceleration at t =0

(d) T1 = T2 Answer: (d)Solution: For a flow to exist, continuity should be satisfied.

Question 8. An incompressible homogeneous fluid is flowing steadily in a variable diameter pipe having the large and small diameters as 15 cm and 5 cm, respectively. If the velocity at a section at the 15 cm diameter portion of the pipe is 2.5 m/s, the velocity of the fluid (in m/s) at a section falling in 5 cm portion of the pipe is _______ .     [2014 : 1 Mark, Set-I]Solution: 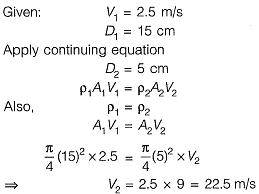 Question 9.  For a 2-D flow field, the stream function ψ is given as 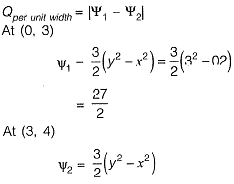