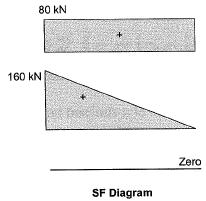 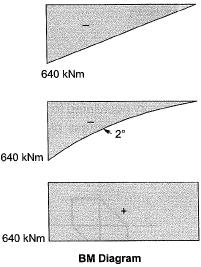 Q.3 A rigid member ACB is shown in the figure. The member is supported at A and B by pinned and guided roller supports, respectively. A force Pacts at Cas shown. Let RAh and RBh be the horizontal reactions at supports A and B, respectively, and RAv be the vertical reaction at support A. Selfweight of the member may be ignored. Bending moment at a distance x from P, Mx = Wx Member PQ has varying BM with a maximum value of WL at Q and it has no twisting moment.

Now moment WL will act as a twisting moment for the member QR. Portion QPhas varying BM with a maximum value of 2WL at R.

Now moment 2 Wl will act as a twisting moment for portion RS which is constant in nature.Q.6 For the simply supported beam of length L, subjected to a uniformly distributed moment M kN-m per unit length as shown in the figure, the bending moment (in kN-m) at the mid-span of the beam is    [2010 : 2 Marks]

Infact the bending moment through out the beam is zero.Q.7 Two people weighing Weach are sitting on a plank of length L floating on water at L/4 from either end. Neglecting the weight of the plank, the bending moment at the centre of the plank is    [2010 : 1 Mark](a) WL/8(b) WL/16(c) WL/32(d) zeroAns. (D)Solution:The plank will be balanced by the buoyant force acting under its bottom. Let the intensity of buoyant force be w.

Thus, the bending moment at the centre of the plank will be,