3.5.2 Penetration theory Most of the industrial processes of mass transfer is unsteady state process. In such cases, the contact time between phases is too short to achieve a stationary state. This non stationary phenomenon is not generally taken into account by the film model. In the absorption of gases from bubbles or absorption by wetted-wall columns, the mass transfer surface is formed instantaneously and transient diffusion of the material takes place. Figure 3.4 demonstrates the schematic of penetration model.Basic assumptions of the penetration theory are as follows:1) Unsteady state mass transfer occurs to a liquid element so long it is in contact with the bubbles or other phase2) Equilibrium exists at gas-liquid interface3) Each of liquid elements stays in contact with the gas for same period of time

Under these circumstances, the convective terms in the diffusion can be neglected and the unsteady state mass transfer of gas (penetration) to the liquid element can be written as:

(3.60)The boundary conditions are: t = 0, Z > 0 : c = cAb and t > 0, Z = 0 : c = cAi.The term cAb is the concentration of solute at infinite distance from the surface and cAi is the concentration of solute at the surface. The solution of the partial differential equation for the above boundary conditions is given by the following equation:

(3.61)Where erf(x) is the error function defined by

(3.62)If the process of mass transfer is a unidirectional diffusion and the surface concentration is very low (cAb~0), the mass flux of component A, NA [kg m–2 s –1 ], can be estimated by the following equation:

(3.64)Then the mass transfer coefficient is given by

(3.65)The average mass transfer coefficient during a time interval tc is then obtained by integrating Equation (3.61) as

(3.66)So from the above equation, the mass transfer coefficient is proportional to the square root of the diffusivity. This was first proposed by R. Higbie in 1935 and the theory is called Higbie’s penetration theory.3.5.3 Surface Renewal Theory For the mass transfer in liquid phase, Danckwert (1951) modified the Higbie’s penetration theory. He stated that a portion of the mass transfer surface is replaced with a new surface by the motion of eddies near the surface and proposed the following assumptions:1) The liquid elements at the interface are being randomly swapped by fresh elements from bulk2) At any moment, each of the liquid elements at the surface has the same probability of being substituted by fresh element3) Unsteady state mass transfer takes place to an element during its stay at the interface. Hence, average molar flux,NA,av =

(3.68)where s is fraction of the surface renewed in unit time, i.e., the rate of surface renewal [s-1 ].3.5.4 Boundary Layer TheoryBoundary layer theory takes into account the hydrodynamics/flow field that characterizes a system and gives a realistic picture of the way mass transfer at a phase boundary. A schematic of concentration boundary layer is shown in Figure 3.5. 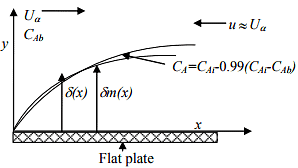 (3.69)where, x is the distance of a point from the leading edge of the plate; kL,x is the local mass transfer coefficient.