The periodicity is the repetition of elements with similar properties after certain regular intervals when the elements are arranged in order of increasing atomic number. 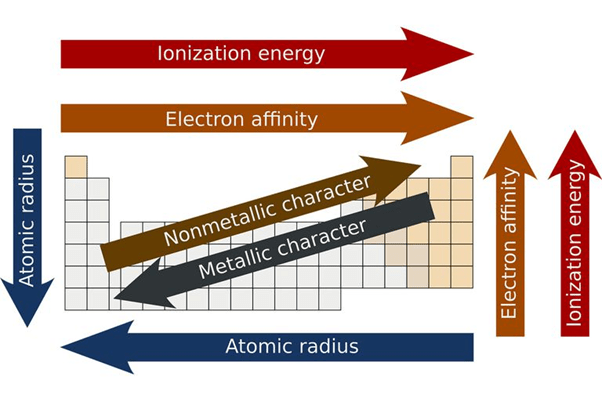 Periodicity in the Periodic Table

Atomic size is the distance between the centre of the nucleus of an atom and its outermost shell.

In a Period (Left to Right)

An atomic radius is half the distance between adjacent atoms of the same element in a molecule.

Variation in Atomic Radius in a Group Atomic radii decreases along the periods because as the number of electrons increases in the same shell of the atom, the effective nuclear attraction increases, thereby reducing the distance between the outer shell and the nucleus i.e. decreasing atomic radii.

The distance between the nucleus and the outermost shell of an ion is known as ionic radii.

Amount of energy required to remove the most loosely bounded electron from an isolated gaseous atom.

(i) Size of Atom: Varies inversely

(v) Electronic Configuration (E.C.): The atoms having stable E.C. have less tendency to lose electrons. So they have high I.E.

General Trend of Ionisation Energy1. Across the Period: L → R 2. Along a Group: Top to bottom First Ionisation Energies of the Elements