Electron gain Enthalpy When expressed in terms of enthalpy change (ΔH) then it is termed as E.G.E. Remember thatΔH = - ve for exothermic change.For EA1, energy is released              ∴ΔHEA1 = - ve

(i) Nuclear Charge: Varies directly As nuclear charge increases, the incoming e- is more strongly attracted and more amount of energy is liberated.

Less amount of energy is liberated.

Periodic Trends (i) In a Period : Along a period, electron affinity increases [with exception] as Zeff ­ 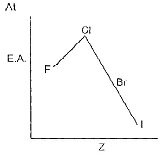 (1) A fully filled and half filled which have low values or even sometimes energy is required rather than getting released.

Across the Period : The E.N. values increase along a period from left to right.Down the Group:

Most Electronegative Atom of P.T.:

(1) Polarity of a molecule : As the DE increases between two bonded atoms; it polarity also increases.Eg. H - I < HBr < H - Cl < H - F .....dipole moment The direction of dipole is also determine by

(2) Nature of the bond of a molecule

(3) Determination of Bond Strength: As the ΔE = X A - X B increases, a stronger covalent bond is formed.

INERT PAIR EFFECTInert pair effect term refers to the resistances of a pair of s electrons to be lost or to participate in covalent bond formation.Example:

Sn(II) exist as a simple ion Sn2+ and is a strong reducing agent whereas Sn(IV) is covalent.

Pb2 is Ionic, stable and more common than Pb (IV) which is oxidizing.

Bi3+ is stable and Sb3+ is a reducing agent.