The document Doc: Permanent Tissues - Types Parenchyma NEET Notes | EduRev is a part of the NEET Course Biology Class 11.
All you need of NEET at this link: NEET

Permanent tissues are composed of cells which have lost the power of division temporarily or permanently.

They are formed by division and differentiation of meristematic tissues.

I. Parenchyma : It is very primitive type of tissue. It is first evolved tissue. Remaining all different types of tissues are derived from this tissue.  so it is also called as fundamental tissue l Parenchyma name coined by Grew. 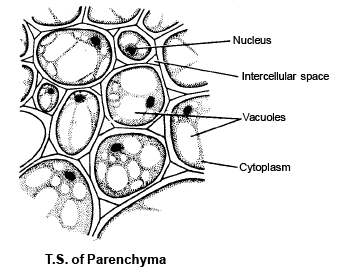 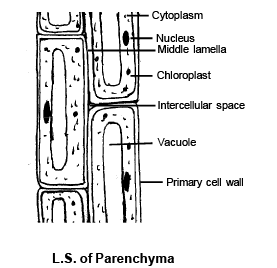 MODIFICATIONS OF PARENCHYMA :1. Prosenchyma :- The cells of this parenchyma are long with pointed ends. This parenchyma forms the pericyle of roots. Function : Provide support to plant organ.

2. Aerenchyma :- This parenchyma is made up of rounded cells. These cells surrounds the large air chambers.Air chambers are lysigenous in origin. Aerenchyma is found in cortex region. It provide buoyancy to hydrophyte plants.

4. Chlorenchyma : Such type of parenchyma in which abundant quantity of chloroplasts are found. Two types of chlorenchyma are present in dorsiventral leaves :-

(a) Palisade tissues :- Inter cellular spaces are absent. Their cells are tightly fitted together. They are present towards adaxial/ ventral/upper side of leaf. Number of chloroplasts are more in palisade tissue as compare to spongy tissue. So upper surface of a leaf appears more green as compared to lower surface.

(b) Spongy tissues :- Large intercellular spaces are present. So they facilitates transpiration and gaseous exchange.They are present towards abaxial/dorsal/lower side of leaf.

1. The main function of this tissue is storage of food. 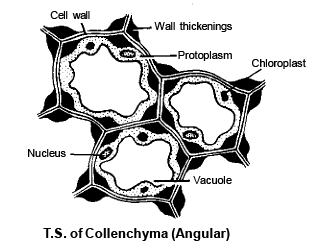 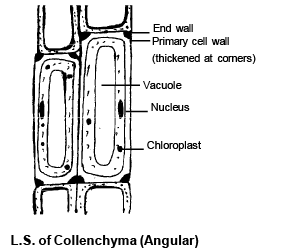 TYPES OF COLLENCHYMA :On the basis of place of deposition, it is classify into three types by majumdar :-

1. Lamellar/plate collenchyma :- The cells of collenchyma arranged in lamellar forms. The cell have thickening on the tangential walls. Due to such type of deposition, cell looks like a lamellar or plates. Ex. Sunflower stem.

2. Angular collenchyma :- This type of collenchyma abundantly found in plants. The cells of this tissue are angular. The deposition of pectocellulose at the angles of cell wall. e.g., Stem of Datura, Solanum and tomato

Types of sclerenchyma On the basis of length of cells and amount of deposition of wall materials (Lignin). Sclerenchyma cells are of two types.

I. Sclereids : These cells are small, extremely thick walled and their ends are not pointed. Sclereids are isodiametricorirregular in shape. Sclereids cells have more pits and lumen is almost very small.

Their pit cavity is branched. (A) Stone cells or Brachy- sclereids or Grit cells:-These cells are spherical or oval in shape. They are found in endocarp of drupe fruits, so endocarp becomes hard. *

(B) Trichosclereids : These are also known as internal hairs. They are spines like, bifurcated cells. These are found in floating leaves of hydrophytes.

(C) Astro Sclereids or Stellate sclerenchyma : These cells are stellate (star) shaped. They are found in floating leaves.

(D) Macro-sclereids or Rod cells or Malpighi cells :-They are small and rod like cells. They are present in seed coats. Ex. legume seeds.

Example :- These cells are found in leaves of Hakea and Osmanthus. 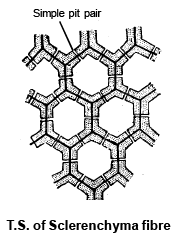 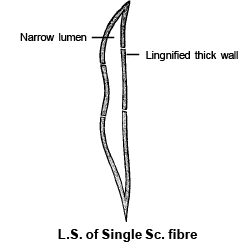 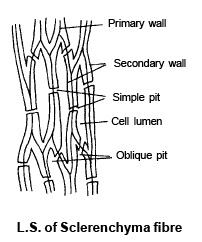 On the basis of structure fibres are classified into two groups :-

(a) Libriform fibres :- They are highly thickened long fibres. They posses simple pits and narrow lumen.Libriform fibres are found in phloem, xylem, pericycle and hypodermis (Maximum in phloem).

(b) Fibre Tracheids :-  They are also highly thickened. Bordered pits are present in these fibres and lumen is broad. They are only found in xylem.

A. Surface fibres :- They are present on the surface of plant. These fibres also called as filling fibres.

Example 3 :  White silk cotton (Kapok) - Obtained from Ceiba pentendra (Both red and white silk cotton fibres are not true fibres and they are also an example of seed surface fibre.)

(ii) Coir of coconut is also a type of surface fibre. They are derived from the mesocarp. These are true fibres, becouse they are lignified.

B. Xylary or wood fibres :- These are hard fibres. They fibres are not flexible. They can not be knitted (weaved) easily so they are not useful. These are obtained from xylem.Ex. Munj fibre (Saccharum munja)

C. Bast fibres/Extra xylary fibres/Phloem fibre :- These are also known as commercial fibres. These fibres are flexible and can be knitted (weaved) easily. They have great economic value.

Fibres which are obtained from pericycle are called perivascular fibres.