2. PHASES OF A COMPILER:A compiler operates in phases. A phase is a logically interrelated operation that takes source program in one representation and produces output in another representation. The phases of a compiler are shown in below There are two phases of compilation.a. Analysis (Machine Independent/Language Dependent)b. Synthesis (Machine Dependent/Language independent) Compilation process is partitioned into no-of-sub processes called ‘phases’ 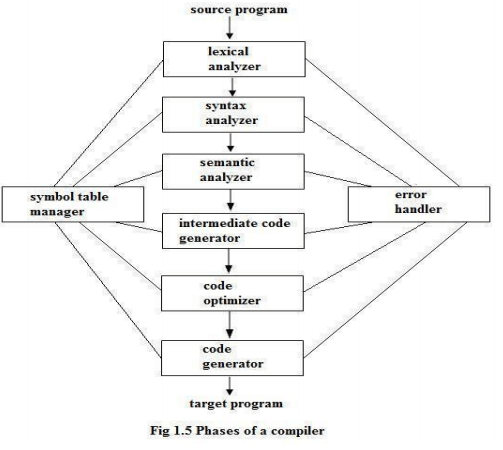 Whenever a phase of the compiler discovers an error, it must report the error to the error handler, which issues an appropriate diagnostic msg. Both of the table-management and errorHandling routines interact with all phases of the compiler.Example: 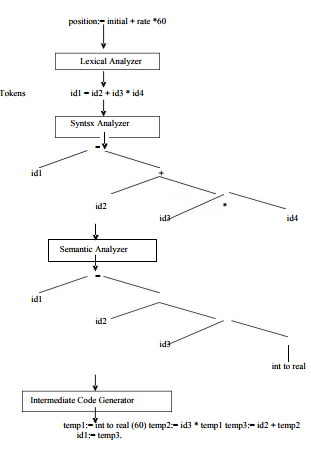 2.1 LEXICAL ANALYZER:The LA is the first phase of a compiler. Lexical analysis is called as linear analysis or scanning. In this phase the stream of characters making up the source program is read from left-to-right and grouped into tokens that are sequences of characters having a collective meaning.

Upon receiving a ‘get next token’ command form the parser, the lexical analyzer reads the input character until it can identify the next token. The LA return to the parser representation for the token it has found. The representation will be an integer code, if the token is a simple construct such as parenthesis, comma or colon. LA may also perform certain secondary tasks as the user interface. One such task is striping out from the source program the commands and white spaces in the form of blank, tab and new line characters. Another is correlating error message from the compiler with the source program.

A pattern is a rule describing the set of lexemes that can represent a particular token in source program.

2.1.3 Lexical Errors: Lexical errors are the errors thrown by the lexer when unable to continue. Which means that there’s no way to recognise a lexeme as a valid token for you lexer? Syntax errors, on the other side, will be thrown by your scanner when a given set of already recognized valid tokens don't match any of the right sides of your grammar rules. Simple panic-mode error handling system requires that we return to a high-level parsing function when a parsing or lexical error is detected.Error-recovery actions are: