The document Photometry and Geometrical Optics (Part - 1) - Optics, Irodov JEE Notes | EduRev is a part of the Course Physics For JEE.

= 4.5 mW, is uniformly distributed over all wavelengths of the interval. The function V (λ) is assumed to be linear in the given spectral interval.

Ans. (a) The relative spectral response V(λ) shown in Fig. (5.11) of the book is so defined that A/V (λ) is the energy flux of light of wave length λ, needed to produce a unit luminous flux at that wavelength. (A is the conversion factor defined in the book.)

energy flux corresponding to a luminous flux of 1 lumen

and energy flux corresponding to a luminous flux of 1 lumen

since energy is distributed uniformly. Then

since V (λ) is assumed to vary linearly in the interval

lm with wavelength λ = 0.59 μm. Find the peak strength values of electric and magnetic fields in the luminous flux at a distance r = = 1.0 m from the source. Make use of the curve illustrated in Fig. 5.1.

Q.3. Find the mean illuminance of the irradiated part of an opaque sphere receiving (a) a parallel luminous flux resulting in illuminance E0  at the point of normal incidence; (b) light from a point isotropic source located at a distance l = = 100 cm from the centre of the sphere; the radius of the sphere is R = 60 cm and the luminous intensity is I = 36 cd.

Now, to calculate the total luminous flux incident on the sphere, we note that the illuminance at the point of normal incidence is E 0 . Thus the incident flux is

The area irradiated is :

Q.4. Determine the luminosity of a surface whose luminance depends on direction as L = Lo  cosθ, where θ is the angle between the radiation direction and the normal to the surface.

where the integration must be in the forward hemisphere of the emitting surface (assuming light is being emitted in only one direction say outward direction of the surface.) But

Q.5. A certain luminous surface obeys Lambert's law. Its luminance is equal to L. Find: (a) the luminous flux emitted by an element ΔS of this surface into a cone whose axis is normal to the given element and whose aperture angle is equal to θ; (b) the luminosity of such a source.

The flux emitted into the cone is

Q.6. An illuminant shaped as a plane horizontal disc S = 100 cm2 in area is suspended over the centre of a round table of radius R = 1.0 m. Its luminance does not depend on direction and is equal to L = 1.6.104  cd/m2. At what height over the table should the illuminant be suspended to provide maximum illuminance at the circumference of the table? How great will that illuminance be? The illuminant is assumed to be a point source.

Ans. The equivalent luminous intensity in the direction OP  is 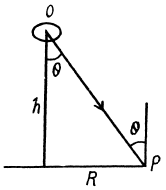 This is maximum when and the maximum illuminance is        R = h

Q.7. A point source is suspended at a height h = 1.0 m over the centre of a round table of radius R = 1.0 m. The luminous intensity I of the source depends on direction so that illuminance at all points of the table is the same. Find the function I (θ), where θ is the angle between the radiation direction and the vertical, as well as the luminous flux reaching the table if I (0) = I0 = 100 cd.

Ans. The illuminance at P is

since this is constant at all x, we must have

The luminous flux reaching the table is

Ans. The illuminated area acts as a Lambert source of luminosity M = πL where

and the illuminance at the point P is Then the maximum illuminance is

This illuminance is obtained at a distance

from the ceiling. Substitution gives the value

Q.9. A luminous dome shaped as a hemisphere rests on a horizontal plane. Its luminosity is uniform. Determine the illuminance at the centre of that plane if its luminance equals L and is independent of direction.

Ans. From the definition of luminance, the energy emitted in the radial direction by an element dS of the surface of the dome is

where dA is the area of an element on the plane illuminated by the radial light. Then

The illuminance at 0 is then

Q.10. A Lambert source has the form of an infinite plane. Its luminance is equal to L. Find the illuminance of an area element oriented parallel to the given source.

in the direction of the surface element dA at O.The total illuminance at O is then

Q.11. An illuminant shaped as a plane horizontal disc of radius R = 25 cm is suspended over a table at a height h = 75 cm. The illuminance of the table below the centre of the illuminant is equal to E0  = 70 lx. Assuming the source to obey Lambert's law, find its luminosity.

Light emitted from this ring is

Q.12. A small lamp having the form of a uniformly luminous sphere of radius R = 6.0 cm is suspended at a height h = 3.0 m above the floor. The luminance of the lamp is equal to L = 2.0.104  cd/m2 and is independent of direction. Find the illuminance of the floor directly below the lamp.

Ans. See the figure below. The light emitted by an element of the illuminant towards the point 0 under consideration is Hence, the illuminance at O is

Q.13. Write the law of reflection of a light beam from a mirror in vector form, using the directing unit vectors e and e' of the inci- dent and reflected beams and the unit vector n of the outside normal to the mirror surface.

Ans. We see from the diagram that because of the law of reflection, the component of the incident unit

Ans. We choose the unit vectors perpendicular to the mirror as the x, y,-z axes in space. Then after reflection from the mirror with normal along x axis

are the basic unit vectors. A fter a second reflection from the 2nd mirror say along y axis.

Finally after the third reflection

Q.15. At what value of the angle of incident θ1 is a shaft of light reflected from the surface of water perpendicular to the refracted shaft?

Ans. Let PQ be the surface of water and n be the R.I. of water. Let AO is the shaft of light with incident angle θ1 and OBand OC are the reflected and refracted light rays at angles

Q.16. Two optical media have a plane boundary between them. Supposeθicr is the critical angle of incidence of a beam and θ1  is the angle of incidence at which the refracted beam is perpendicular to the reflected one (the beam is assumed to come from an optically denser medium). Find the relative refractive index of these media if

Ans. Let two optical mediums of R.I.n1 and n2 respectively be such that n1 >n2 . In the case when angle of incidence is

(Fig.), from the law of refraction In the case , when the angle of incidence is θ1, from the

law of refraction at the interface of mediums 1 and 2 .

But in accordance with the problem

Q.17. A light beam falls upon a plane-parallel glass plate d=6.0 cm in thickness. The angle of incidence is θ = 60°. Find the value of deflection of the beam which passed through that plate.

Ans. From the Fig. the sought lateral shift 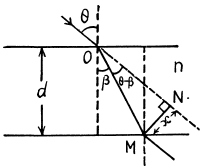 But from the law of refraction

Q.18. A man standing on the edge of a swimming pool looks at a stone lying on the bottom. The depth of the swimming pool is equal to h. At what distance from the surface of water is the image of the stone formed if the line of vision makes an angle θ with the normal to the surface?

Ans. From the Fig. From the law of refraction

Q.19. Demonstrate that in a prism with small refracting angle θ the shaft of light deviates through the angle

regardless of the angle of incidence, provided that the latter is also small.

Ans. The figure shows the passage of a monochromatic ray through the given prism, placed in air medium.From the figure, we have

From the Snell’s law

Ans. (a) In the general case, for the passage of a monochromatic ray through a prism as shown in the figure of the soln. of 5.19,

And from the Snell’s law,

But from the Snell’s law

By continuing, I agree that I am at least 13 years old and have read and agree to the terms of service and privacy policy.
Why do I need to sign in?
EduRev is a knowledge-sharing community that depends on everyone being able to pitch in when they know something.
What do I get?
125,000
Videos & Docs
500
Courses
15,000
Tests
2.5 Mn
Study Partners
I have an EduRev Account   •   Sign Up with Email
Start learning with
EduRev App
Over 1Mn+ users using EduRev App