We will spend some time in looking at the mathematical foundations of electrostatics. For a charge distribution defined by a charge density ρ, the electric field in the region is given by

which gives, for the potential φ, the equation which is known as the Poisson’s equation,

In particular, in a region of space where there are no sources, we have

Which is called the Laplace’s equation. In addition, under static conditions, the equation is valid everywhere.

Solutions of Laplace’s equation are known as Harmonic functions. The expressions for the Laplacian operator in Cartesian, spherical and cylindrical coordinates are given by the following expressions :

the azimuthal angle of the spherical coordinate system, which should not cause confusion).

The formal solution of Poisson’s equation has been known to us from our derivation of the form of potential using Coulomb’s law. It is easy to check that the expression

Where we have used the primed variable

indicate the integrated variable and

the position coordinate of the point where the potential is calculated. We will operate both sides of the above equation with

acts on the variable

To prove the uniqueness theorem, let us assume that contrary to the assertion made in the theorem, there exist two solutions φ1 and φ2 of either Poisson’s or Laplace’s equation which satisfy the same set of boundary conditions on surfaces S1, S2, … and the boundary S. The conditions, as stated above, may be either of Dirichlet type or Neumann type : 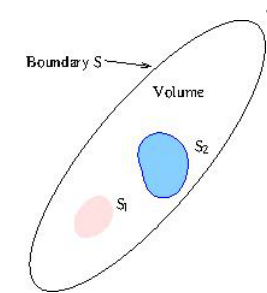 Let us define a new function

Further, whether φ1 and φ2 satisfy Poisson’s or Laplace’s equation, their difference

In order to prove the Uniqueness theorem we will use Green’s First Identity, derived in Module 1, which states that for two arbitrary scalar fields φ and ψ, the following identity holds,

where S is the boundary defining the volume V. We choose

Since on the surface , either the Dirichlet or the Neumann boundary condition is valid, the right hand side of the above is zero everywhere. (Note that the surface consists of S + S1 + S2 + ...., with the direction of normal being outward on S and inward on the conductor surfaces enclosed).

Since φ satisfies Laplace’s equation, we are then left with

The integrand, being a square of a field is positive everywhere in the volume and its integral can be zero only if the integral itself is identically zero. Thus we have,

constant φ = 0 on the surface and therefore, it is zero everywhere in the volume giving,

If, on the other hand, Neumann boundary condition is satisfied, we must have

Consider a parallel plate capacitor with a plate separation of d between the plates. The lower plate is grounded while the upper plate is maintained at a constant potential φ0. Between the two plates there are no sources and hence Laplace’s equation is valid in this region. Since the plates are assumed infinite in the x, y directions, the only variation is with respect to the z direction and we have, 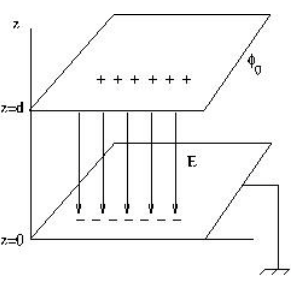 The solution of this equation is straightforward, and we get,

. where A and B are constants. Substituting the boundary conditions at z=0 and at z=d,

Substituting these, we get

The electric field in the region is given by

Likewise, the normal to the lower plate being in the positive z direction, the charge density on that plate is equal and opposite. If we multiply the charge density by the area of the plate A, we get (area is taken to be large so that the edge effects are neglected),

to be the charge on the upper plate. The lower plate has equal but opposite charge. Dividing the amount of charge on the positive plate by the potential difference φ0 between the plates, we get the capacitance of the parallel plate capacitor to be 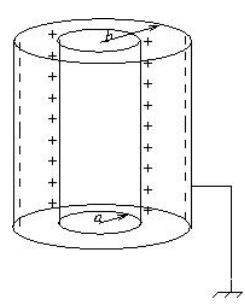 Here p is the radial distance from the axis and θ is the polar angle. We assume the cylinders to be of infinite extend in the z direction. This implies that there is azimuthal symmetry and no variation with respect to z as well. The solution can only depend on the radial distance p. Giving.

The solution of the above equation is easy to obtain, and we get,

where A and B are two constants which must be determined from the boundary conditions.

Substituting these in the expression for the potential, we get the potential in the region between the cylinders to be given by

The electric field in the region is given by the negative gradient of the potential which is simply the derivative with respect to p,

where we have taken care of the minus sign by inverting the argument of log. Note that the expression for the charge density on the outer plate will not be identical because of the fact that the radii of the two cylinders are different. The total charge per unit length on the inner conductor is given by

This is a differential equation in a single variable, and the solution can be easily obtained as

where A and B are constants.

The other boundary condition

Substituting these into the solution, we have, 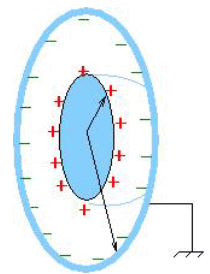 The charge density on the inner plate is given by

The total charge on the inner sphere is

It can be checked that the outer sphere has equal and opposite negative charge. The capacitance is given by

The capacitance of a single spherical conductor is obtained by taking the outer sphere to infinity, i.e.,

which gives the capacitance for a single conductor to be

This result is not surprising because for a single conductor containing charge Q, the potential is

so that the capacitance, which is given by

satisfies Laplace’s equation inside a sphere, show that the average of

over the surface is equal to the value of the potential at the origin.

2. Consider two concentric spherical shells of radii R1 and R2 . A charge Q1 resides on the inner sphere and Q2 on the outer sphere. The potential is set to be zero at infinite distance. Find the potential at the centre of the sphere.

1. The average of the potential over the surface is

Since the angles are averaged out, the right hand side can only depend on R. Thus we have

Since the outward normal on the sphere is along

and we can write,

The right hand side can be converted to a volume integral using the divergence theorem,

satisfies Laplace’s equation. Thus the average in independent of the radius of the sphere and we can continuously decrease the size of the sphere so that it reduces to a point at the origin.

2. The potential on the surface of the inner sphere can be easily shown to be

This must also be the potential at the origin by uniqueness theorem as derived in Problem 3.

2. Using the property of solutions to Laplace’s equation show that there cannot be an electrostatic field inside a hollow conductor unless there is a charge in that region.

4. Consider two point conductors separated by a distance of 10m. One of the conductors is maintained at a potential of 100 V while the other maintained at 200 V. Determine the potential function and the corresponding electric field..

3. Conductor is an equipotential. Thus the inner surface of the hollow is also at a potential φ0 . The potential inside the hollow must have the same value of the potential because (i) being a constant, it satisfies Laplace’s equation and (ii) it satisfies Dirichlet boundary condition on the surface. By uniqueness theorem, this is the only possible solution.

4. Let the first conductor be located at the origin and the second at x=10. On the entire x axis other than at these two points, Laplace’s equation is applicable, which has the solution

Inserting boundary conditions we have,

so that the potential is

Volts. The electric field is