For human population, growth curve is S - shaped/sigmoid shaped in which 5 stages are present. 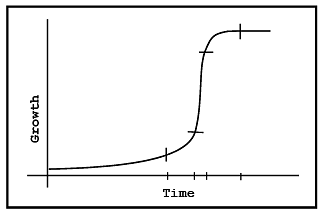 1. Lag Phase : In the earlier stages of growth curve a species (Human population & Macro Organism) comes into the new environment so due to the lack of resources and lack of adaptations minimum (negligible) growth occurs in this phase.

(ii) Exponential Phase : In this middle stage of log phase, species completely become adapted to their new environment due to presence of sufficient resources, rapid growth occurs in this phase.

This phase for human population begin in 1750 A.D.. Now the population is running in this phase.

Growth rate decrease in this phase so this is called negative acceleration phase.

In this last stage of growth curve, resources become limited so zero growth occurs in this phase.

In this stage birth rate is equal to death rate so the growth rate is zero.

This stage for human population will occur when population reaches carrying capacity. (8-10 Billion). 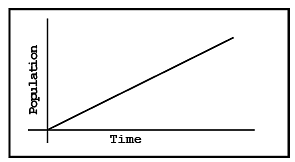 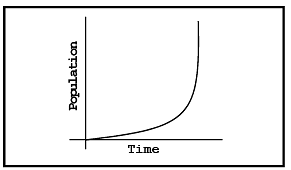 (1) Lag Phase : In this stage a new species comes into the new environment so minimum growth occurs in this phase.

(2) Exponential Phase : Due to presence of sufficient resources these organisms show rapid growth.

(3) Crash Phase : With end of resources species escape from this environment in any other new environment in which resources are sufficient in amount or this leads to mass starvation and Mortality. 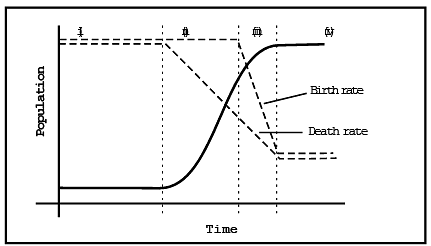 This stage is characterised by high birth and high death rate which cancel each other and the population remain stationary.

­­­­­­The death rate begins to decline while the birth rate remains unchanged.

Ex. : Many countries of South Asia and Africa, Bangladesh, Kenya.

The death rate declines still further and the birth rate tend to fall, the population continues to grow because birth exceed death.

2. Maximum Carrying Capacity : Maximum population size that can be supported by the environment is called the maximum carrying capacity (8 – 10 Billion).

(i) The first component consists of productive systems, such as croplands, orchards, etc. and provides food and fibre;

(iii) The final component has waste assimilative systems, such as water ways, wetlands, etc. that assimilate the wastes produced by human activities.

4. Vital Index : It is percentage ratio of natality and mortality in a population.

5. Generation time or population doubling time : Time between birth of individual and birth of their off spring, or in bacteria time between two divisions in E.coli - 20 min., Tuberculosis - 20 hour, Lepra bacilli - 20 days.

6. Replacement Level (R.L.) : Number of children a couple must produce to replace themselves. The actual R.L. is always slightly high than 2.0 since some children will die before reaching reproductive age.In developed countries = 2.1 Developing Countries = 2.7 Due to higher death rate at the immature stage and shorter life expectancy)

(1) He stated that population grows geometrically when unchecked but food supply grows only arithmetically.

(2) Naturally after some time an imbalance would occur in the population and the environment.

(3) When the imbalance reaches a certain value, some factors like hunger, epidemics, floods, earth quakes, war, etc. will bring the population to a desired level. Such factors are called "Positive checks by Malthus"(Catastrophic factor of population).

3. Set of conditions and resources used by population is called "Niche of population".

5. First 'National population policy' is framed in April 1976. It called for an increase in legal minimum age of marriage from 15 to 18 for females and 18 to 21 for males.

6. Total fertility rate (TFR)- is the average number of children that would be born to a women during her life time.

7. Net reproduction rate- is defined as number of daughter a new born girl will bear during her life time.

8. Reduction in birth rate rather than death rate is the only solution to control the world population problem.

10. The S-shape sigmoid growth form is represented by the following equation :- 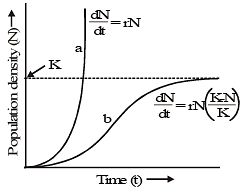