Example 3:Find why the instance of PCP given below cannot have a solution.

It can be seen that for every pair, |xi| > |yi|.So, in whatever way we concatenate the string, the length of the x string will be longer than the corresponding y string. Thsu there is no solution for this instance of PCP.

Definition of PCPLet there be two series, x series and y series of size n with same charactere set ∑ with their ith element as xi and yi,respectively; does there exist a solution tha tforms the same x series and y series?The generic solution of PCP can be written as,xi1 xi2 xi3........xik = yi1yi2yi3.......yikPost Correspondence Problem is unsolvable.This means it is a non computable function. No turing machine exists for PCP.The proof of this is beyond the scope of our study.Use of PCPOther problems can be reduced to PCP and we can declare them as unsolvable or undecidable. 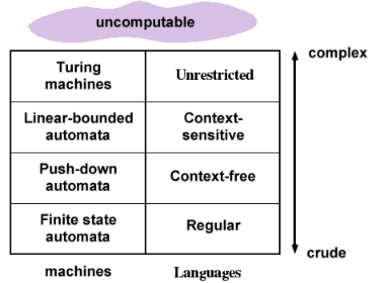 The following is an example for a Context Sensitive grammar:S → aBCT|aBCT → ABCT|ABCBA → ABCA → ACCB → BCaA → aaaB → abbB → bbbC → bccC → ccin this grammar, LHS of a production is not longer than the RHS.The language, L = {anbncn|n > 0} is a context sensitive language.

14 Linear Bounded Automata (LBA)Context sensitive languages are recognised using linear bounded automata (LBA).Here input tape is restricted in size. A linear function is used for restricting the length of the input tape.Many compiler languages lie between context sensitive and context free languages.A linear bounded automation is a non deterministic Turing machine which has a single tape whose length is not infinitebut bounded by a linear function.

Formal DefinitionA linear bounded automation is defined as,M = (Q,∑, Γ, δ, q0, #, <,>,F),whereQ is a set of states,∑ is a set of input symbols,Γ is a set of tape symbols, including #,δ is the set of transition functions from(Q × Γ) → (Q × Γ × {L, R, N}),q0 is the start state,# is the blank symbol,< is the left end marker in the input tape,> is the right end marker in the input tape,F is the final state.Following diagram shows a linear bounded automation, 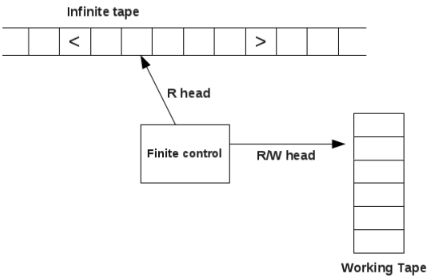