Precipitation is any form of solid or liquid water that falls from the atmosphere to the earth’s surface. Rain, drizzle, hail, and snow are examples of precipitation. In India, rain is the most common form of precipitation.

For the formation of clouds and subsequent precipitation, it is for necessary that the moist air masses to cool in order to condense. This is generally accomplished by adiabatic cooling of moist air through a process of being lifted to higher altitudes. The precipitation types can be categorized as.

From the point of view of water resources engineering, it is essential to quantify rainfall over space and time and extract necessary analytical information.

Rain falling over a region is neither uniformly distributed nor is it constant over time. You might have experienced the sound of falling rain on a cloudy day approaching from the distance. Gradually, the rain seems to surround you and after a good shower, it appears to recede. It is really difficult to predict when and how much of rain would fall. However, it is possible to measure the amount of rain falling at any point and measurements from different point gives an idea of the rainfall pattern within an area.

In India, the rainfall is predominantly dictated by the monsoon climate. The monsoon in India arises from the reversal of the prevailing wind direction from Southwest to Northeast and results in three distinct seasons during the course of the year. The Southwest monsoon brings heavy rains over most of the country between June and October and is referred to commonly as the ‘wet’ season. Moisture-laden winds sweep in from the Indian Ocean as low-pressure areas develop over the subcontinent and release their moisture in the form of heavy rainfall. Most of the annual rainfall in India comes at this time with the exception of in Tamil Nadu, which receives over half of its rain during the Northeast monsoon from October to November.

The retreating monsoon brings relatively cool and dry weather to most of India as drier air from the Asian interior flows over the subcontinent. From November until February, temperatures remain cool and precipitation low. In northern India, it can become quite cold, with snow occurring in the Himalayas as weak cyclonic storms from the west settle over the mountains. Between March and June, the temperature and humidity begin to rise steadily in anticipation of the Southwest monsoon. This pre-monsoonal period is often seen as a third distinct season although the post-monsoon in October also presents unique characteristics in the form of slightly cooler temperatures and occasional light drizzling rain. These transitional periods are also associated with the arrival of cyclonic tropical storms that batter the coastal areas of India with high winds, intense rain and wave activity.

Rainfall and temperature vary greatly depending on the season and geographic location. Further, the timing and intensity of the monsoon is highly unpredictable. This results in a vastly unequal and unpredictable distribution over time and space. In general, the northern half of the subcontinent ses greater extremes in temperature and rainfall with the former decreasing towards the north and the latter towards the west. Rainfall in the Thar Desert and areas of Rajasthan can be as low as 200mm per year, whereas on the Shillong Plateau in the Northeast, average annual rainfall can exceed 10,000 mm per year. The extreme southern portion of the country sees less variation in temperature and rainfall. In Kerala, the total annual rainfall is of the order of 3,000 mm.

In this lecture, we discuss about rainfall measurement and interpretation of the data.

One can measure the rain falling at a place by placing a measuring cylinder graduated in a length scale, commonly in mm. In this way, we are not measuring the volume of water that is stored in the cylinder, but the ‘depth’ of rainfall. The cylinder can be of any diameter, and we would expect the same ‘depth’ even for large diameter cylinders provided the rain that is falling is uniformly distributed in space.

Now think of a cylinder with a diameter as large as a town, or a district or a catchment of a river. Naturally, the rain falling on the entire area at any time would not be the same and what one would get would be an ‘average depth’. Hence, to record the spatial variation of rain falling over an area, it is better to record the rain at a point using a standard sized measuring cylinder.

In practice, rain is mostly measured with the standard non-recording rain gauge the details of which are given in the Bureau of Indian Standards code IS 4989: 2002.  The rainfall variation at a point with time is measured with a recording rain-gauge, the details of which may be found in IS 8389: 2003.  Modern technology has helped to develop Radars, which measures rainfall over an entire region.  However, this method is rather costly compared to the conventional recording and non-recording rain gauges which can be monitored easily with cheap labour.

measurement is commonly used to estimate the amount of water falling over the land surface, part of which infiltrates into the soil and part of which flows down to a stream or river.  For a scientific study of the hydrologic cycle, a correlation is sought, between the amount of water falling within a catchment, the portion of which that adds to the groundwater and the part that appears as streamflow. Some of the water that has fallen would evaporate or be extracted from the ground by plants. In Figure 1, a catchment of a river is shown with four rain gauges, for which an assumed recorded value of rainfall depth have been shown in the table.

It is on the basis of these discrete measurements of rainfall that an estimation of the average amount of rainfall that has probably fallen over a catchment has to be made. Three methods are commonly used, which are discussed in the following section.

The time of rainfall record can vary and may typically range from 1 minute to 1 day for non – recording gauges, Recording gauges, on the other hand, continuously record the rainfall and may do so from 1 day 1 week, depending on the make of instrument.  For any time duration, the average depth of rainfall falling over a catchment can be found by the following three methods.

The simplest of all is the Arithmetic Mean Method, which taken an average of all the rainfall depths as shown in Figure 2. FIGURE 2. Representation of the rainfall recorded in the four rain gauges (values in mm)

Average rainfall as the arithmetic mean of all the records of the four rain gauges, as shown below:

This method, first proposed by Thiessen in 1911, considers the representative area for each rain gauge. These could also be thought of as the areas of influence of each rain gauge, as shown in Figure 3. 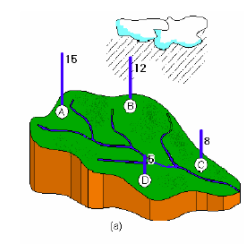 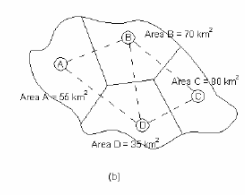 These areas are found out using a method consisting of the following three steps:

For the given example, the “weighted” average rainfall over the catchment is determined as,

This is considered as one of the most accurate methods, but it is dependent on the skill and experience of the analyst. The method requires the plotting of isohyets as shown in the figure and calculating the areas enclosed either between the isohyets or between an isohyet and the catchment boundary. The areas may be measured with a planimeter if the catchment map is drawn to a scale. FIGURE 4. Rainfall measurement by the Isohyetal method, (a) Recorded rainfall (b) Isohyets and the areas enclosed bewteen two consecutive isohyets.

For the problem shown in Figure 4, the following may be assumed to be the areas enclosed between two consecutive isohyets and are calculated as under:

The areas II and III fall between two isohyets each. Hence, these areas may be thought of as corresponding to the following rainfall depths:

Hence, the average precipitation by the isohyetal method is calculated to be

Please note the following terms used in this section:

Isohyets: Lines are drawn on a map passing through places having the equal amount of rainfall recorded during the same period at these places (these lines are drawn after giving consideration to the topography of the region).

Planimeter: This is a drafting instrument used to measure the area of a graphically represented planar region.

This is the average or representative rainfall at a place. The mean annual rainfall is determined by averaging the total rainfall of several consecutive years at a place. Since the annual rainfall varies at the station over the years, a record number of years are required to get a correct estimate.

Similarly, the mean monthly rainfall at a place is determined by averaging the monthly total rainfall for several consecutive years. For example, the mean rainfall along with the mean number of rainy days for New Delhi (as obtained from the World Meteorological Organisation – WMO) is as follows:

In comparison, that for the city of Kolkata, obtained from the same source, is as follows: