In designing structures for water resources, one has to know the areal spread of rainfall within watershed. However, it is often required to know the amount of high rainfall that may be expected over the catchment. It may be observed that usually a storm event would start with a heavy downpour and may gradually reduce as time passes.  Hence, the rainfall depth is not proportional to the time duration of rainfall observation.  Similarly, rainfall over a small area may be more or less uniform.  But if the area is large, then due to the variation of rain falling in different parts, the average rainfall would be less than that recorded over a small portion below the high rain fall occurring within the area.  Due to these facts, a Depth-Area-Duration (DAD) analysis is carried out based on records of several storms on an area and, the maximum areal precipitation for different durations corresponding to different areal extents.

The result of a DAD analysis is the DAD curves which would look as shown in Figure 5. 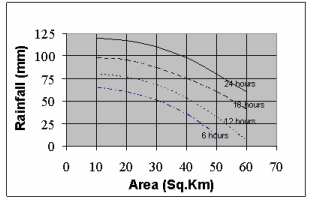 The analysis of continuous rainfall events, usually lasting for periods of less than a day, requires the evaluation of rainfall intensities. The assessment of such values may be made from records of several part storms over the area and presented in a graphical form as shown in Figure 6. 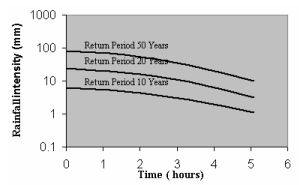 Two new concepts are introduced here, which are:

Rainfall recorded at various rain gauges within a catchment should be monitored regularly for any anomalies. For example of a number of recording rain gauges located nearby, one may have stopped functioning at a certain point of time, thus breaking the record of the gauge from that time onwards. Sometimes, a perfectly working recording rain gauge might have been shifted to a neighbourhood location, causing a different trend in the recorded rainfall compared to the past data. Such difference in trend of recorded rainfall can also be brought about by a change in the neighbourhood or a change in the ecosystem, etc. These two major types of anomalies in rainfall are categorized as

The rainfall record at a certain station may become discontinued due to operational reasons. One way of approximating the missing rainfall record would be using the records of the three rain gauge stations closet to the affected station by the “Normal Ratio Method” as given below:

Where P4 is the precipitation at the missing location, N1, N2, N3 and N4 are the normal annual precipitation of the four stations and P1, P2 and P3 are the rainfalls recorded at the three stations 1, 2 and 3 respectively.

This may arise due to change in location of rain gauge, its degree of exposure to rainfall or change in instrument, etc. The consistency check for a rainfall record is done by comparing the accumulated annual (or seasonal) precipitation of the suspected station with that of a standard or reference station using a double mass curve as shown in Figure 7. 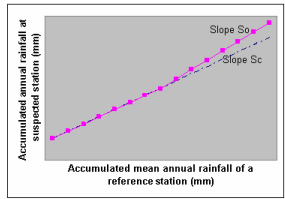 From the calculated slopes S0 and Sc from the plotted graph, we may write

Two values of extreme rainfall events are important from the point of view of water resources engineering.  These are:

This is the amount of rainfall over a region which cannot be exceeded over at that place. The PMP is obtained by studying all the storms that have occurred over the region and maximizing them for the most critical atmospheric conditions. The PMP will of course vary over the Earth’s surface according to the local climatic factors. Naturally, it would be expected to be much higher in the hot humid equatorial regions than in the colder regions of the mid-latitudes when the atmospheric is not able to hold as much moisture. PMP also varies within India, between the extremes of the dry deserts of Rajasthan to the ever humid regions of South Meghalaya plateau.

This is the storm which is reasonably capable of occurring over the basin under consideration, and is generally the heaviest rainstorm, which has occurred in the region of the basin during the period of rainfall records. It is not maximized for the most critical atmospheric conditions but it may be transposed from an adjacent region to the catchment under considerations.

The methods to obtain PMP and SPS are involved and the interested reader mayfind help in text books on hydrology, such as the following:

There are several methods available for measuring evaporation or evapotranspiration, some of which are given in the following sub-sections.

The lack of reliable measured data from field in actual projects has given rise to a number of methods to predict Potential Evapotranspiration (PET) using climatological data. The more commonly used methods to estimate evapotranspiration are the following:

Some of the more popular of these methods have been discussed in detail in lesson 5.4 “Estimating irrigation demand”. Interested readers may consult Modi, P N (2000) Water Resources Engineering for detailed discussions on this issue.