It collides elastically with another body, B of the same mass which has an initial velocity of

. After collision, A moves with a velocity

Since, collision is elastic so by the conservation of linear momentumInitial momentum = Final momentum

Kinetic energy of B after collision is

Therefore, x = 1Q.2. A particle of mass m is dropped from a height h above the ground. At the same time another particle of the same mass is thrown vertically upwards from the ground with a speed of

If they collide head-on completely inelastically, the time for the combined mass to reach the ground, in units of Time for collision is given by t =

Velocity before collision is

From conservation of momentum, we have

So, height from ground is given by

Q. 3 A particle of mass m is projected with a speed u from the ground at an angle θ = π/3 w.r.t. horizontal (x-axis). When it has reached its maximum height, it collides completely inelastically with another particle of the same mass and velocity

. The horizontal distance covered by the combined mass before reaching the ground is    (2020)(1)

Ans. (1)Solution.Given that initial speed u, angle of projection from ground θ = π/3.Speed of particle at height point is given by

Applying conservation of momentum, we have

Time of flight after collision is given by

Range after collision is given by R =v′t Q 5. A particle of mass 20 g is released with an initial velocity 5 m/s along the curve from the point a, as shown in the figure. The point a is at height h from point B. The particle slides along the frictionless surface. When the particle reaches point B, its angular momentum about O will be (take g = 10 m/s2)    (2019) Which of the following statements is false for the angular momentum L about the origin?      (2016)(1)

when the particle is moving from A to B

when the particle is moving from C to D

when the particle is moving from B to C

when the particle is moving from D to AAns: (2,4)Solution:Along CD, ⊥ distance from line of motion =

Hence (2) is incorrect.In option (4) the direction of

is incorrect.Q 7. In the figure shown/ ABC is a uniform wire. If centre of mass wire lies vertically below point A, then    (2016) 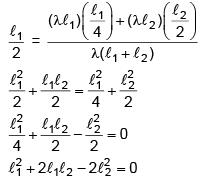