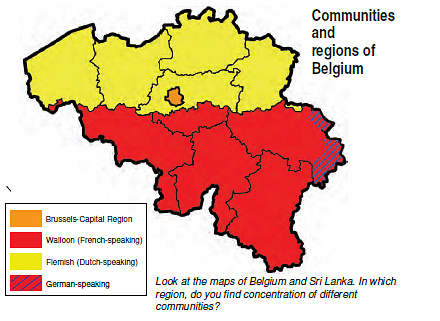 Q.3. Which type of powers does the communist government of Belgium enjoy?    [CBSE 2016-17]Ans. The community government has the power regarding cultural, educational, and language-related issues.Q.4. Which system of power-sharing is called checks and balances?Ans. The horizontal distribution of power-sharing arrangements is known as the system of checks and balances.

Q.1. When did Sri Lanka become independent? How did the Sinhala community seek to secure dominance over government and why? What were its effects? [CBSE 2016-17]Ans. (1) Sri Lanka became independent in 1948.(2) The Sinhala community by virtue of their majority sought to secure dominance over the government by adopting following measures:

Q.2. Power-sharing is the very spirit of democracy. [CBSE 2016-17]Ans. (1) Prudential reason: It helps to reduce the possibility of conflict between social groups. It brings out better outcomes,Example: In India seats in the Parliament and assemblies have been reserved for weaker sections.(2) Moral reason:

Q.4. Which are the different forms of power-sharing in modern democracies?    [CBSE 2016]Ans. (1) Power-sharing among different organs of government such as the legislature, executive, and judiciary.

(3)  Power-sharing among different social groups such as religious and linguistic groups.Example: community government in Belgium.

(4) Power-sharing among political parties, pressure groups, etc.Political parties with different ideologies may come together and form a coalition government as has happened in India.