The purest form of the commercial iron is wrought iron.

Q.2. The refining method used when the metal and the impurities have low and high melting temperatures, respectively, is    (2020)(a) Liquation(b) Vapor phase refining(c) Zone refining(d) Distillation

Liquation refining is used to separate a low melting metal like, tin from the high melting impurities.

The feasible reactions occur in blast furnace is:

Q.4. According to the following diagram, A reduces BO2 when the temperature is 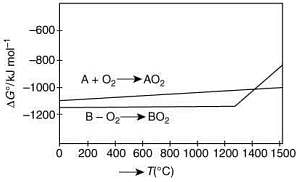 Q.6. The correct statement regarding the given Ellingham diagram is:    (2019) 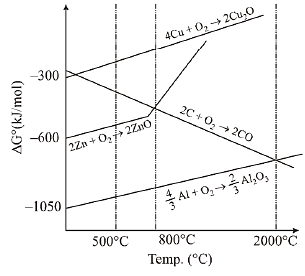 Ans. aIn the given Ellingham diagram, the metal which has a lower value of ΔG° (more negative) can reduce a metal oxide whose curve lies above it. So, Al can reduce ZnO at 1400 °C.

Ans. cHall Heroult’s process is an electrochemical process used in extraction of Al from alumina. 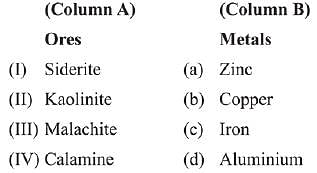 Ans. bCalcination involves heating of carbonates or hydrated oxides in absence of air.

is roasting (heating in a regular supply of air).

Q.11. In the Hall-Heroult process, aluminium is formed at the cathode. The cathode is made out of:    (2019)(a) Pure aluminium(b) Carbon(c) Copper(d) Platinum

Ans. bIn Hall-Heroult process, steel vessel with lining of carbon acts as cathode and graphite is used as anode.

Ans. aCalcination involves the conversion of metal carbonates or hydrated oxides into metal oxides. ZnO and MgO are oxides, therefore, does not require calcination.

Q.13. With respect to an ore, Ellingham diagram helps to predict the feasibility of its    (2019)(a) Electrolysis (b) Zone refining(c) Vapour phase refining(d) Thermal reduction

Ans. dEllingham diagram is a graph showing the temperature dependence of the stability for compounds. It is used to select reducing agent so it helps to predict feasibility of its thermal reduction.

Ans. aMond’s process is used for purification of Ni

Ans. aIn manufacturing of aircraft an alloy of Mg and Al called magnalium is used due to its light weight and high strength.

Q.20. The correct statement is:    (2019)(a) aniline is a froth stabilizer.(b) zincite is a carbonate ore.(c) sodium cyanide cannot be used in the metallurgy of silver.(d) zone refining process is used for the refining of titanium.

Ans. aTi is refined by van Arkel method. Silver is leached by dilute solution of NaCN. Zincite is oxide ore of zinc i.e. ZnO. Aniline is a froth stabilizer.

Ans. bFroth floatation was discovered by washer woman. It is a method of concentration of ores.

Q.22. The correct statement is:    (2019)(a) leaching of bauxite using concentrated NaOH solution gives sodium aluminate and sodium silicate.(b) the Hall-Heroult process is used for the production of aluminium and iron.(c) pig iron is obtained from cast iron.(d) the blistered appearance of copper during the metallurgical process is due to the evolution of CO2.

Ans. aDuring metallurgy of aluminium, when bauxite (powdered ore) is treated with NaOH (cone), sodium aluminate (Na[Al(OH)4]) is formed and impurity (SiO2) present in bauxite dissolves by forming sodium silicate (Na2SiO3)Al2O3(s) + 2NaOH(aq) + 3H3O(l) → 2Na [Al (OH)4] (aq)Cast iron is obtained from pig iron.Blister of copper is due to evolution of SO2.Hall Heroult process is used for the production of aluminium.

Q.24. Which one of the following ores is best concentrated by froth floatation method?    (2016)(a) Magnetite(b) Siderite(c) Galena(d) Malachite

Q.25. The plot shows the variation of ln Kp versus temperature for the two reactions. 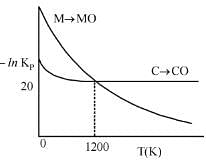 Ans. dAccording to Ellingham diagram, as given 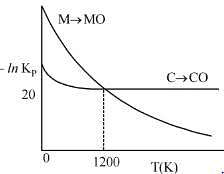 The document JEE Main Previous year questions (2016-20): General Principles & Processes of Isolation of Elements - Notes | Study Chemistry for JEE - JEE is a part of the JEE Course Chemistry for JEE.
All you need of JEE at this link: JEE
Attempt Now
Join Course