If it reaches the same height,speed remains same after collision only the direction changes. Q.3. Two bodies of mass 4 kg and 6 kg are tied to the ends of a massless string. The string passes over a pulley which is frictionless (see figure). The acceleration of the system in terms of acceleration due to gravity (g) is :     [2020] 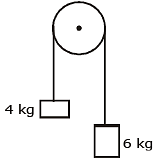 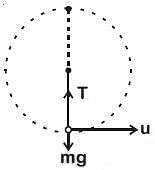 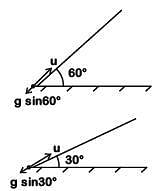 Q 7.Which one of the following statements is incorrect ?A: Rolling friction is smaller than sliding frictionB: Limiting value of static friction is directly proportional to normal reactionsC: Frictional force opposes the relative motionD: Coefficient of sliding friction has dimensions of length    [2018]Ans: DSolution:

Q 8. A block of mass m is placed on a smooth inclined wedge ABC of inclination θ as shown in the figure. The wedge is given an acceleration 'a' towards the right. The relation between a and θ for the block to remain stationary on the wedge is :-    [2018] 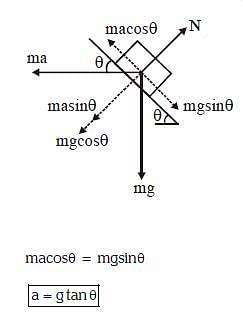 Q 9. Two blocks A and B of masses 3 m and m respectively are connected by a massless and inextensible string. The whole system is suspended by a massless spring as shown in figure. The magnitudes of acceleration of A and B immediately after the string is cut, are respectively :-    [2017] 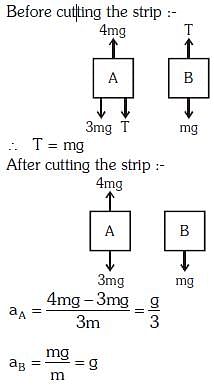 Q 10. What is the minimum velocity with which a body of mass m must enter a vertcal loop of radius R so that it can complete the loop ? [2016]A: √5gRB: √gRC: √2gRD: √3gRAns: ASolution: The question is illustrated in the figure below, 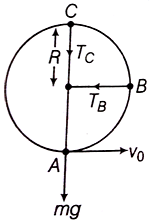 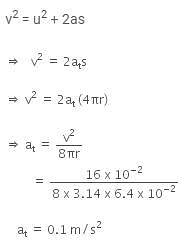 Q 12. A car is negotiating a curved road of radius R. The road is banked at an angle .. The coefficient of friction between the tyres of the care and the road is 1s. The maximum safe velocity on this road is:    [2016]A: 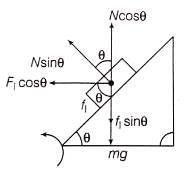 Q 15. A particle of mass m is driven by a machine that delivers a constant power k watts. If the particle starts from rest the force on the particle at time t is :    [2015]A: 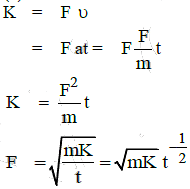 Q 16. A block A of mass m1 rests on a horizontal table. A lights string connected to it passes over a frictionless pulley at the edge of table and from its other end another block B of mass m2 is suspended. The coefficient of kinetic friction between the block and the table is μk. When the block A is sliding on the table, the tension in the string is:   [2015]A: 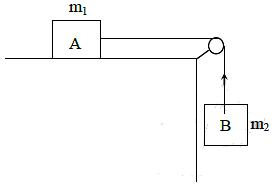 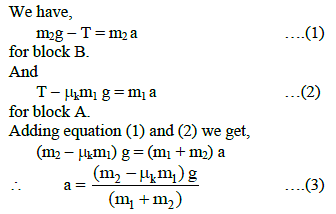 Q 18. A system consists of three masses m1, m2 and m3 connected by a string passing over a pulley P. The mass m1 hangs freely and m2 and m3 are on a rough horizontal table (the coefficient of friction = μ). The pulley is frictionless and of negligible mass. The downward acceleration of mass m1 is :(Assume m1 = m2 = m3 = m)    [2014]

Q 19. The force F acting on a particle of mass m is indicated by the force-time graph as shown below. The climate change in momentum of the particle over the time interval from zero to 8s is,    [2014] 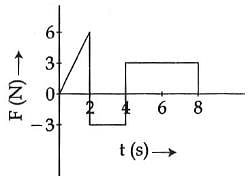 The document Previous year questions (2014-22): Laws of Motion - Notes | Study Physics Class 11 - NEET is a part of the NEET Course Physics Class 11.
All you need of NEET at this link: NEET
Attempt Now
Join Course