The document Previous year questions (2016-20) - Laws of Motion Notes | EduRev is a part of the JEE Course 35 Years JEE Main & Advanced Question Bank: Physics Class 11.
All you need of JEE at this link: JEE

Let tension in the string be T

Condition for no topple is

Friction force is given byF = μmgSo, So, maximum value of

Q.4. A spring-mass system (mass m, spring constant k and natural length l) rests in equilibrium on a horizontal disc. The free end of the spring is fixed at the centre of the disc. If the disc together with spring-mass system, rotates about its axis with an angular velocity ω, ( k >> mω2) the relative change in the length of the spring is best given by the option     [2020]

The relative change in the length of the spring is:

Q.5. A block of mass 10 kg is kept on a rough inclined plane as shown in the figure. A force of 3 N is applied on the block. The coefficient of static friction between the plane and the block is 0.6. What should be the minimum value of force P such that the block does not move downward? (Take g = 10 m/s2)    [2019]

The coefficient of static friction, μ = 0.6 Q.7. A particle of mass m is moving in a straight line with momentum p. Starting at time t = 0, a force F = kt acts in the same direction on the moving particle during time interval T so that its momentum changes from p to 3p. Here, k is a constant. The value of T is    [2019](a)

Q.8. A block kept on a rough inclined plane, as shown in the figure, remains at rest up to a maximum force 2 N down the inclined plane. The maximum external force up the inclined plane that does not move the block is 10 N. The coefficient of static friction between the block and the plane is (Take g = 10 m/s2)    [2019]

Block is at rest then, 2 N force is applied.

When 2 N force is applied in downward direction, thus

When 10 N force is applied in upward direction, then Q.9. Two masses m1 = 5 kg and m2 = 10 kg, connected by an inextensible string over a frictionless pulley, are moving as shown in the figure. The coefficient of friction of horizontal surface is 0.15. The minimum weight m that should be put on top of m2 to stop the motion is:    [2018] Q.10. A given object takes n times more time to slide down a 45° rough inclined plane as it takes to slide down a perfectly smooth 45° incline. The coefficient of kinetic friction between the object and the incline Is: [2018](a)

Q.12. A body is thrown vertically upwards. Which one of the following graphs correctly represent the velocity vs time?   [2017](a)

Acceleration is constant and negative

Q.13. A uniform disc of radius R and mass M is free to rotate only about its axis. A string is wrapped over its rim and a body of mass m is tied to the free end of the string as shown in the figure. The body is released from rest. Then the acceleration of the body is:    [2017] Q.15. The machine as shown has 2 rods of length 1 m connected by a pivot at the top. The end of one rod is connected to the floor by a stationary pivot and the end of the other rod has a roller that rolls along the floor in a slot. As the roller goes back and forth, a 2 kg weight moves up and down. If the roller is moving towards right at a constant speed, the weight moves up with a    [2017] 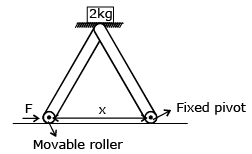 (a) Speed which is 3/4th of that of the roller when the weight is 0.4 m above the ground(b) Constant speed(c) Decreasing speed(d) Increasing speed From the diagram,Let us take the triangle AOC, then⇒ sinθ = opposite side / hypotenuse⇒ sinθ = y / 1⇒ sinθ = yDifferentiating above equation,

From equation 2 we get

From equation 1 we get

From the equation 3 and 4 we get

Q.16. A point particle of mass m, moves along the uniformly rough track PQR as shown in the figure. The coefficient of friction, between the particle and the rough track equals m. The particle is released, from rest, from the point P and it comes to rest at a point R. The energies, lost by the ball, over the parts, PQ and QR, of the track, are equal to each other, and no energy is lost when particle changes direction from PQ to QR.The values of the coefficient of friction m and the distance x (= QR), are, respectively close to [2016]

From work energy theorem and given condition:

Q.17. A rocket is fired vertically from the earth with an acceleration of 2g, where g is the gravitational acceleration. On an inclined plane inside the rocket, making an angle q. With the horizontal, a point object of mass m is kept. The minimum coefficient of friction μmin between the mass and the inclined surface such that the mass does not move is:    [2016](a) tanθ(b) tan2θ(c) 3 tanθ(d) 2 tanθ

Free body diagram is shown in the figure.Psuedo force on the object is 2mg in the downward direction as seen from the rocket frame of reference.Normal force in the direction perpendicular to the inclined plane.N = 3mg cos(θ)Maximum frictional force in the direction along the plane,Fr = μmN cos(θ)∴ Fr = 3μmmg cos(θ)This should balance the force on the block along the downward direction of plane.3mg sin(θ) = 3μmmg cos(θ)μm = tan(θ) Q.18. Which of the following option correctly describes the variation of the speed v and acceleration 'a' of a point mass falling vertically in a viscous medium that applies a force F = –kv, where 'k' is constant, on the body ?( Graphs are schematic and not drawn to scale)    [2016]

Q.19. Concrete mixture is made by mixing cement, stone and sand in a rotating cylindrical drum. If the drum rotates too fast, the ingredients remain stuck to the wall of the drum and proper mixing of ingredients does not take place. The maximum rotational speed of the drum in revolutions per minute (rpm) to ensure proper mixing is close to (Take the radius of the drum to be 1.25m and its axle to be horizontal):    [2016](a) 1.3(b) 0.4(c) 27.0(d) 8.0