The document JEE Main Previous year questions (2016-20): Motion Notes | Study Physics For JEE - JEE is a part of the JEE Course Physics For JEE.
All you need of JEE at this link: JEE

Relative velocity of second particle with respect to first particle is

Q.2. A particle moves such that it's position vector is

where ω is a constant and t is time. Then which of the following statements is true for the velocity

is directed away from the origin.(2)

both are perpendicular to

both are parallel to

is directed towards the origin.Ans: (4)Solution: Given that

had opposite direction to Q.4. A particle starts from the origin at t = 0 with an initial velocity of

and moves in the x-y plane with a constant acceleration

From the equation of motion in two dimensions, we have

Differentiate Eq. (2) with respect to t, we get

Therefore, n = 3Q 6. In a car race on straight road, car A takes a time t less than car B at the finish and passes finishing point with a speed v more than that of car B. Both the cars start from rest and travel with constant acceleration a1 and a2, respectively. Then v is equal to    [JEE Main 2019](1) Relative velocity of A with respect to B is (same direction)

Train moving in opposite direction

Q 8. A particle starts from the origin at time t = 0 and moves along the positive x-axis. The graph of velocity with respect to time is shown in figure. What is the position of the particle at time t = 5 s?    (JEE Main 2019)

Q 9. A particle is moving with a velocity

(4) 2aωAns: (1)Solution:Velocity coordinates of particle is obtained by differentiating the position coordinate with respect to time, Thus: Hence, velocity of particle is have equal magnitudes. The magnitude of

is n times the magnitude of

According to the question

Squaring both the sides, we get The radius of curvature of the trajectory is

at t = 0 with an initial velocity

Q 16. All the graphs below are intended to represent the same motion. One of them does it incorrectly. Pick it up.    (JEE Main 2018)

Q 18. The velocity-time graphs of a car and a scooter are shown in the figure. (i) The difference between the distance travelled by the car and the scooter in 15 s and (ii) the time at which the car will catch up with the scooter are, respectively.     (JEE Main 2018)

The distance traveled in 15 seconds by both will be given by area under curve. Suppose after time t, they will meet, then distance traveled by both of them will be equal. The magnitude of a coplanar vector

Solving equation (i) and (ii) we get

Q 20. Which graph corresponds to an object moving with a constant negative acceleration and a positive velocity?    (JEE Main 2017)

Q 21. A car is standing 200 m behind a bus, which is also at rest. The two start moving at the same instant but with different forward accelerations. The bus has acceleration 2 m/s2 and the car has acceleration 4 m/s2. The car will catch up with the bus after a time of (JEE Main 2017)(1)

The document JEE Main Previous year questions (2016-20): Motion Notes | Study Physics For JEE - JEE is a part of the JEE Course Physics For JEE.
All you need of JEE at this link: JEE 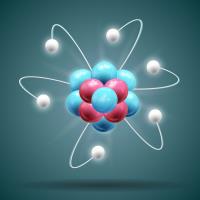