After reading this lesson, you will be able to

The principle of superposition is a central concept in the analysis of structures. This is applicable when there exists a linear relationship between external forces and corresponding structural displacements. The principle of superposition may be stated as the deflection at a given point in a structure produced by several loads acting simultaneously on the structure can be found by superposing deflections at the same point produced by loads acting individually. This is illustrated with the help of a simple beam problem. Now consider a cantilever beam of length L and having constant flexural rigidity EI subjected to two externally applied forces P1 and P2 as shown in Fig. 2.1. From moment-area theorem we can evaluate deflection below C, which states that the tangential deviation of point c from the tangent at point A is equal to the first moment of the area of the M/EI diagram between A and C about C. Hence, the deflection u below C due to loads P1 and p2 acting simultaneously is (by moment-area theorem), 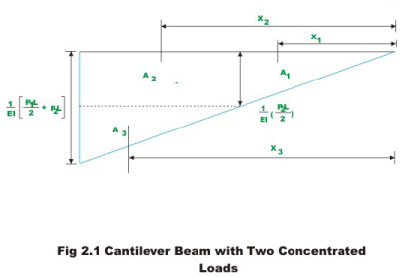 are the distances from point C to the centroids of respective areas respectively.

After simplification one can write,

Now consider the forces being applied separately and evaluate deflection at C in each of the case.

where u21 is the deflection at C(2) when load is applied at B(1) . Now the total deflection at C when both the loads are applied simultaneously is obtained by adding u22 and u21.

Hence it is seen from equations (2.3) and (2.6) that when the structure behaves linearly, the total deflection caused by forces P1, P2,......Pn at any point in the structure is the sum of deflection caused by forces P1, P2,......Pn acting independently on the structure at the same point. This is known as the Principle of Superposition. The method of superposition is not valid when the material stress-strain relationship is non-linear. Also, it is not valid in cases where the geometry of structure changes on application of load. For example, consider a hinged-hinged beam-column subjected to only compressive force as shown in Fig. 2.3(a). Let the compressive force P be less than the Euler’s buckling load of the structure. Then deflection at an arbitrary point C (say)

is zero. Next, the same beamcolumn be subjected to lateral load Q with no axial load as shown in Fig. 2.3(b). Let the deflection of the beam-column at C be

Now consider the case when the same beam-column is subjected to both axial load P and lateral load Q. As per the principle of superposition, the deflection at the centre

must be the sum of deflections caused by P and Q when applied individually. However this is not so in the present case. Because of lateral deflection caused by Q, there will be additional bending moment due to P at C. Hence, the net deflection

will be more than the sum of deflections

Consider an elastic spring as shown in the Fig.2.4. When the spring is slowly pulled, it deflects by a small amount u1. When the load is removed from the spring, it goes back to the original position. When the spring is pulled by a force, it does some work and this can be calculated once the load-displacement relationship is known. It may be noted that, the spring is a mathematical idealization of the rod being pulled by a force  P axially. It is assumed here that the force is applied gradually so that it slowly increases from zero to a maximum value P. Such a load is called static loading, as there are no inertial effects due to motion. Let the load-displacement relationship be as shown in Fig. 2.5. Now, work done by the external force may be calculated as, 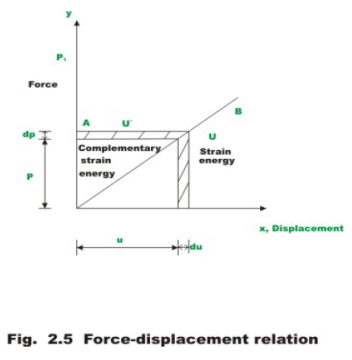 Work and energy are expressed in the same units. In SI system, the unit of work and energy is the joule (J), which is equal to one Newton metre (N.m). The strain energy may also be defined as the internal work done by the stress resultants in moving through the corresponding deformations. Consider an infinitesimal element within a three dimensional homogeneous and isotropic material. In the most general case, the state of stress acting on such an element may be as shown in Fig. 2.6. There are normal stresses (σx, σy and σz) and shear stresses (τxy, τyz, and τzx) acting on the element. Corresponding to normal and shear stresses we have normal and shear strains. Now strain energy may be written as, in which στ  is the transpose of the stress column vector i.e., 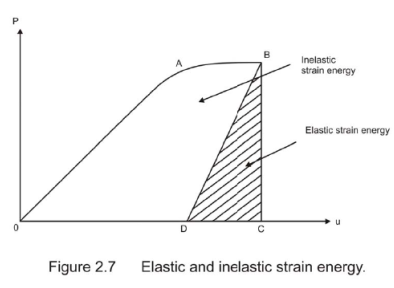 This is not the case always as observed from Fig. 2.7. The complementary energy has no physical meaning. The definition is being used for its convenience in structural analysis as will be clear from the subsequent chapters.