Consider a member of constant cross sectional area A , subjected to axial force P as shown in Fig. 2.8. Let E be the Young’s modulus of the material. Let the member be under equilibrium under the action of this force, which is applied through the centroid of the cross section. Now, the applied force P is resisted by uniformly distributed internal stresses given by average stress σ = P/A as shown by the free body diagram (vide Fig. 2.8). Under the action of axial load P applied at one end gradually, the beam gets elongated by (say) u. This may be calculated as follows. The incremental elongation du of small element of length of beam is given by, In a conservative system, the external work is stored as the internal strain energy. Hence, the strain energy stored in the bar in axial deformation is,

Strain energy due to bending

Consider a prismatic beam subjected to loads as shown in the Fig. 2.9. The loads are assumed to act on the beam in a plane containing the axis of symmetry of the cross section and the beam axis. It is assumed that the transverse cross sections (such as AB and CD), which are perpendicular to centroidal axis, remain plane and perpendicular to the centroidal axis of beam (as shown in Fig 2.9). Consider a small segment of beam of length ds subjected to bending moment as shown in the Fig. 2.9. Now one cross section rotates about another cross section by a small amount ds dθ. From the figure,

where R is the radius of curvature of the bent beam and EI is the flexural rigidity of the beam. Now the work done by the moment M while rotating through angle dθ will be stored in the segment of beam as strain energy dU. Hence,

Now, the energy stored in the complete beam of span L may be obtained by integrating equation (2.18). Thus,

Strain energy due to transverse shear 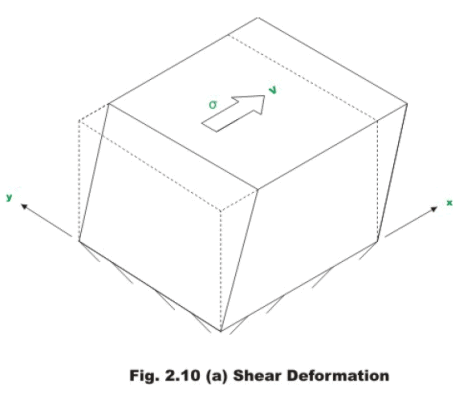 in which A is area of the cross-section and k is the form factor which is dependent on the shape of the cross section. One could write, the deformation du as

where Δγ is the shear strain and is given by

Hence, the total deformation of the beam due to the action of shear force is

Now the strain energy stored in the beam due to the action of transverse shear force is given by,

Strain energy due to torsion Consider a circular shaft of length L radius R , subjected to a torque T at one end (see Fig. 2.11). Under the action of torque one end of the shaft rotates with respect to the fixed end by an angle

Hence the strain energy stored in the shaft is,

Consider an elemental length ds of the shaft. Let the one end rotates by a small amount

with respect to another end. Now the strain energy stored in the elemental length is,

where, G is the shear modulus of the shaft material and J is the polar moment of area. Substituting for

Now, the total strain energy stored in the beam may be obtained by integrating the above equation.

Hence the elastic strain energy stored in a member of length s (it may be curved or straight) due to axial force, bending moment, shear force and torsion is summarized below.

1. Due to axial force

In this lesson, the principle of superposition has been stated and proved. Also, its limitations have been discussed. In section 2.3, it has been shown that the elastic strain energy stored in a structure is equal to the work done by applied loads in deforming the structure. The strain energy expression is also expressed for a 3- dimensional homogeneous and isotropic material in terms of internal stresses and strains in a body. In this lesson, the difference between elastic and inelastic strain energy is explained. Complementary strain energy is discussed. In the end, expressions are derived for calculating strain stored in a simple beam due to axial load, bending moment, transverse shear force and torsion.