It does not contain implementation of the scheduling algorithm in any programming language.

What is Priority Scheduling Algorithm?

All these processes are stored by the operating system in a process table along with an ID alloted to every process (PID), to help keep track of all of them. And, to keep track of their current state the operating system uses a Process Control Block (PCB). The information is updated in the control block as and when the state of the process changes.

But did you wonder what is the criteria that the Operating System uses for the scheduling of these processes? Which process must be allocated with CPU resources first? Well, there are multiple ways in which the Operating System takes these decisions such as execution of the process that takes the least time first, or execution according to the order in which they requested access to the processor and so on. One such important criteria is the priority of the process.In priority scheduling in OS, processes are executed on the basis of their priority. The jobs / processes with higher priority are executed first. Naturally, you might want to know how priority of processes is decided.Priority of processes depends some factors such as:

There can be more factors on the basis of which priority of a process / job is determined. This priority is assigned to the processes by the scheduler.These priorities of processes are represented as simple integers in a fixed range such as 0 to 7, or maybe 0 to 4095. These numbers depend on the type of systems.Now that we know that each job is assigned a priority on the basis of which it is scheduled, we can move ahead with it's working and types.

There are two types of priority scheduling algorithm in OS:

Non-Preemptive SchedulingIn this type of scheduling:

You've now understood the basics of priority scheduling in os. Let's better your understanding with an example of preemptive scheduling.Consider five processes from P1 to P5, with their priority, burst time, and arrival time. If you aren't familiar with the terms burst and arrival time, please Google them! We're going to represent these values associated with these processes in a table. 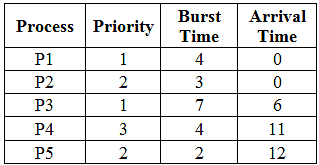 Let's apply whatever we learnt about priority scheduling algorithm. Which process do you think will be executed first? Remember, lower the number, higher the priority. We'll use a gantt chart to keep track of the time, and to check if a process must be preempted.

Of course, the processes that arrive first i.e. at time = 0 will be considered for execution first, which are P1 and P2. The priority of process P1 is higher than P2, and hence it will be executed first.

At time = 1, we do not have any new processes arriving, and process P1 continues to execute, and this goes on till time = 4 and that's when the process has finished its execution.

At time = 5, process P2 is still executing and the burst time remaining is 2. At time = 6, we see that another process arrives in the waiting queue. The first thing that we need to check is the priority and since the priority of process P3 is greater than P2 we must preempt the current process and start the execution of P3, keeping P2 in ready queue with a remaining burst time of 1 (it already executed for 2 seconds).

P3 will execute till time = 13. We now go to our waiting queue to check for processes. Remember that we pick processes with higher priority that arrived first. In our waiting queue, we have processes P2, P4 and P5. We see that P2 and P5 have equal priorities but since the arrival time of P2 is before that of process P5, we must execute process P2 first.

P2 just has one unit time of processing left as we had preempted the process to run P3. At time = 14 P2 process completes it's execution. Again, we look for a process from the waiting queue that can be executed. In the waiting queue we have P4 and P5. Since P5 has the higher priority, we start its execution.

You have now understood the working of preemptive priority scheduling in os! Moving on, let's take a look at it's advantages and disadvantages.

The two classifications are:

When we have multiple processes in the ready queue, there are times when there are similar processes in the waiting queue. Similar how? For example, the processes could be interactive or batch processes, and due to their divergent response time requirements, they would have dissimilar scheduling needs. It makes sense if these similar processes are classified into groups.This is called multilevel queue scheduling. We have different queues for different processes that have different scheduling requirements. For example, for system processes, we can have a separate queue which schedules them according to FCFS method. Interactive processes will have their queue and could be scheduled using SJF scheduling method and so on. These queues have their own priorities as well, and hence known as multilevel queue scheduling. 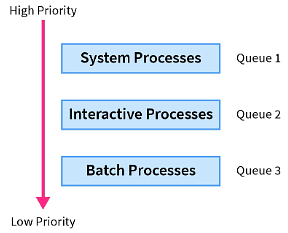 Multilevel Feedback QueuesMultilevel feedback queues are just like the multilevel queues, with one slight difference. If a process is part of Queue 1 in multilevel queue scheduling, then the process cannot switch and move into another queue. But here, it can. This scheduling continues to analyze the time of execution of processes and makes the switch between processes in different queues accordingly, hence the name feedback queues. 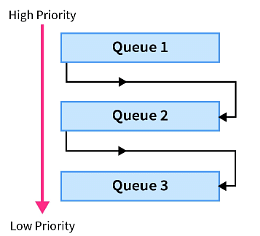 This kind of scheduling in much more flexible than the basic multilevel queue scheduling, and they also reduce the response time. However, the processes in lower priority queues might suffer from starvation in this scheduling method.