The document Probability Distribution (Part - 2) Mathematics Notes | EduRev is a part of the Mathematics Course Additional Topics for IIT JAM Mathematics.
All you need of Mathematics at this link: Mathematics

For a discrete probability distribution, the set of ordered pairs (x,f(x)), where x is each outcome in a given sample space and f(x) is its probability, must follow the following:

In other words, to get the cumulative distribution function, you sum up all the probability distributions of all the outcomes less than or equal to the given variable.For example, given a random variable X which is defined as the face that you obtain when you toss a fair die, find F(3)

In other words, the area under the curve.For a continuous probability distribution, the set of ordered pairs (x,f(x)), where x is each outcome in a given sample space and f(x) is its probability, must follow the following:

For a continuous random variable X, its CDF is given byF(x) = P(X < x)which is the same as saying:

From the above, we can see that to find the probability density function f(x) when given the cumulative distribution function F(x);

if the derivative exists.Continuous probability distributions are given in the form

Since we're finding the probability that the random variable is less than or equal to 4, we integrate the density function from the given lower limit (1) to the limit we're testing for (4).We need not concern ourselves with the 0 part of the density function as all it indicates is that the function only exists within the given region and the probability of the random variable landing anywhere outside of that region will always be zero.

4. P(X > 1)The above problem is asking us to find the probability that the random variable lies at any point between 1 and positive Infinity. We can solve it as follows:

The above is our expected result since we already defined f(x) as lying within that region hence the random variable will always be picked from there.5. F(2)The above is asking us to find the cumulative distribution function evaluated at 2. 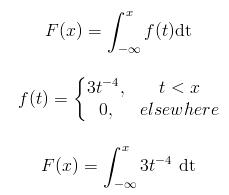 Thus F(2) can be found from the above as