On the basis of synchronization, processes are categorized as one of the following two types:

When more than one processes are executing the same code or accessing the same memory or any shared variable in that condition there is a possibility that the output or the value of the shared variable is wrong so for that all the processes doing the race to say that my output is correct this condition known as a race condition. Several processes access and process the manipulations over the same data concurrently, then the outcome depends on the particular order in which the access takes place.A race condition is a situation that may occur inside a critical section. This happens when the result of multiple thread execution in the critical section differs according to the order in which the threads execute.Race conditions in critical sections can be avoided if the critical section is treated as an atomic instruction. Also, proper thread synchronization using locks or atomic variables can prevent race conditions.

Critical Section ProblemCritical section is a code segment that can be accessed by only one process at a time. Critical section contains shared variables which need to be synchronized to maintain consistency of data variables. 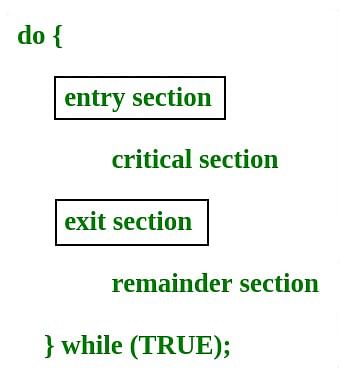 In the entry section, the process requests for entry in the Critical Section.

Any solution to the critical section problem must satisfy three requirements:

Peterson’s Solution is a classical software based solution to the critical section problem.

In Peterson’s solution, we have two shared variables:

TestAndSet is a hardware solution to the synchronization problem. In TestAndSet, we have a shared lock variable which can take either of the two values, 0 or 1.

Before entering into the critical section, a process inquires about the lock. If it is locked, it keeps on waiting until it becomes free and if it is not locked, it takes the lock and executes the critical section.In TestAndSet, Mutual exclusion and progress are preserved but bounded waiting cannot be preserved.Question: The enter_CS() and leave_CS() functions to implement critical section of a process are realized using test-and-set instruction as follows:int TestAndSet(int &lock) {    int initial = lock;    lock = 1;    return initial;}void enter_CS(X){  while test-and-set(X) ;}void leave_CS(X){  X = 0;}In the above solution, X is a memory location associated with the CS and is initialized to 0. Now, consider the following statements:I. The above solution to CS problem is deadlock-freeII. The solution is starvation free.III. The processes enter CS in FIFO order.IV. More than one process can enter CS at the same time.Which of the above statements is TRUE?(a) I(b) II and III(c) II and IV(d) IVAns: aExplanation: The above solution is a simple test-and-set solution that makes sure that deadlock doesn’t occur, but it doesn’t use any queue to avoid starvation or to have FIFO order.

A semaphore is a signaling mechanism and a thread that is waiting on a semaphore can be signaled by another thread. This is different than a mutex as the mutex can be signaled only by the thread that called the wait function.A semaphore uses two atomic operations, wait and signal for process synchronization.A Semaphore is an integer variable, which can be accessed only through two operations wait() and signal().There are two types of semaphores: Binary Semaphores and Counting Semaphores

Critical Section:When more than one processes access a same code segment that segment is known as critical section. Critical section contains shared variables or resources which are needed to be synchronized to maintain consistency of data variable.In simple terms a critical section is group of instructions/statements or region of code that need to be executed atomically, such as accessing a resource (file, input or output port, global data, etc.).In concurrent programming, if one thread tries to change the value of shared data at the same time as another thread tries to read the value (i.e. data race across threads), the result is unpredictable.The access to such shared variable (shared memory, shared files, shared port, etc…) to be synchronized. Few programming languages have built-in support for synchronization.It is critical to understand the importance of race condition while writing kernel mode programming (a device driver, kernel thread, etc.). since the programmer can directly access and modifying kernel data structures. 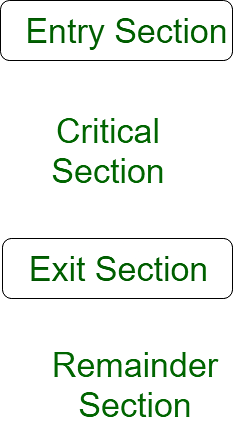 A simple solution to the critical section can be thought as shown below,acquireLock();Process Critical SectionreleaseLock();A thread must acquire a lock prior to executing a critical section. The lock can be acquired by only one thread. There are various ways to implement locks in the above pseudo code. Let us discuss them in future articles.

Process Synchronization is a technique which is used to coordinate the process that use shared Data. There are two types of Processes in an Operating Systems:-

Process Synchronization is mainly used for Cooperating Process that shares the resources. Let us consider an example of 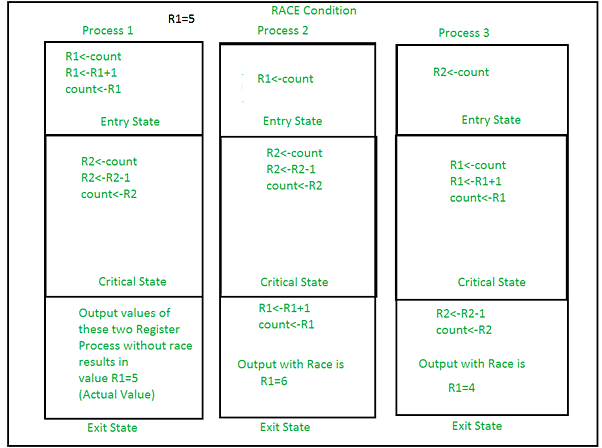 It is the condition where several processes tries to access the resources and modify the shared data concurrently and outcome of the process depends on the particular order of execution that leads to data inconsistency, this condition is called Race Condition. This condition can be avoided using the technique called Synchronization or Process Synchronization, in which we allow only one process to enter and manipulates the shared data in Critical Section. 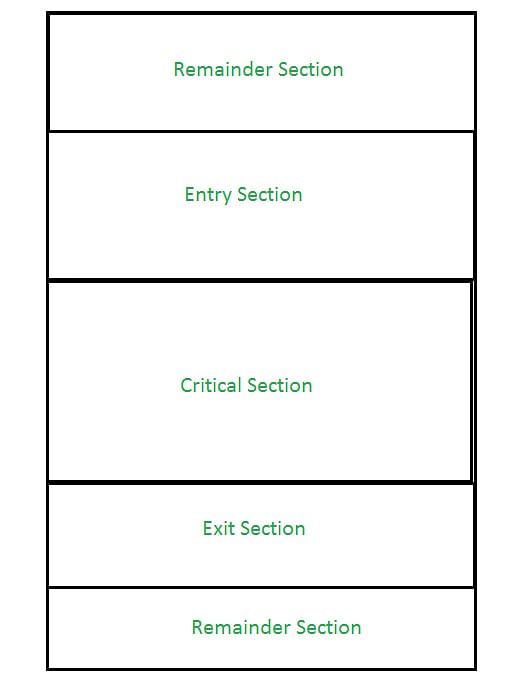 This setup can be defined in various regions like:

Test_and_Set Operation: This allows boolean value (True/False) as a hardware Synchronization, which is atomic in nature i.e no other interrupt is allowed to access. This is mainly used in Mutual Exclusion Application. Similar type operation can be achieved through Compare and Swap function. In this process, a variable is allowed to accessed in Critical Section while its lock operation is ON. Till then, the other process is in Busy Waiting State. Hence Critical Section Requirements are achieved.