The document Propagation and Production of Sound Class 9 Notes | EduRev is a part of the Class 9 Course Science Class 9.
All you need of Class 9 at this link: Class 9

PRODUCTION OF SOUNDPerform the following activities to produce sound. 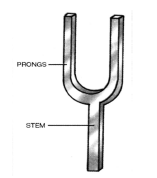 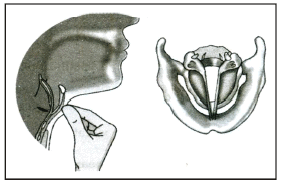 1. Take a plastic scale or ruler from your geometry box. Hold it flat on your desk or table with about half its length protruding (stick out from the surface) over the edge. Now bend it down and release it. It will move up and down rapidly (i.e. it will vibrate) and produce the sound at the same time. The sound will last as long as the vibration (i.e. rapid up and down motion) of the scale continues.

2. Take a tuning fork. Hold it from its stem and strike it with a rubber pad or hammer. You will observe that the prongs of the tuning fork vibrate and at the same time sound is produced (Figure).

3. Place your finger lightly on your throat near the vocal cords as shown in figure. Now say "Ah" for few seconds. You will feel the vibration in your finger as long as you say "Ah".

4. Tie a thin metallic string rigidly at the two ends of a table as shown in figure. Now, pluck the string from the middle and release it. The string begins to vibrate up and down and at the same time, sound is heard.

Conclusion: From these activities, we come to the conclusion that the sound is produced by the vibrating objects or bodies.

Production of Sound in Musical Instruments 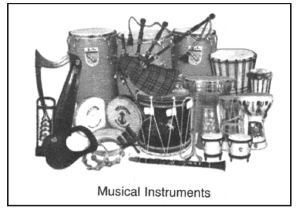 When a drum is beaten, then the skin of drum vibrates and sound is produced.When the strings of a guitar are plucked and released, they vibrate and produce sound. When air is blown into the flute, pipe, clarinet, sexophone etc., it vibrates in the tube of the instrument and hence sound is produced. Sound is also produced when the birds flap their wings during the flight.

What is a Wave?The movement of the disturbance through a medium due to the repeated periodic motion of the particles of the medium about their mean positions is known as a wave.

MECHANICAL WAVEA mechanical wave is a periodic disturbance which requires material medium (i.e. solid, liquid or gas) for its propagation. In other words, waves that are characterised by the motion of particles of a medium are called mechanical waves

(i) Sound waves in air

(iii) Waves produced due to the earthquake (known as seismic waves)

(vi) Waves produced in a slinky or long spring.

TRANSVERSE WAVEIf the particles of a medium vibrate or oscillate about their mean positions at right angles to the direction of propagation of the disturbance then the wave is called transverse wave.

Examples : Movement of string of a sitar or violin, membrance of a tabla or dholak, movement of a kink on a rope.ActivityDescribe an activity to show the formation of a transverse wave.Fix one end of a thin rope and give up and down jerk to the free end of the rope.The rope oscillates or vibrates up and down as shown in figure. The disturbance travels from the free end to the fixed end but the rope vibrates up and down. This wave is known as transverse wave.

A transverse wave travelling on the surface of water is shown in figure.

ORThe distance between two successive particles of the medium which are in phase is called wavelength of the wave. It is denoted by l (lambda).

LONGITUDINAL WAVEIf the particles, of a medium vibrate or oscillate to and fro about their mean positions along the direction of propagation of the disturbance then the wave is called longitudinal wave.

ActivityDescribe an activity to show the formation of longitudinal wave. 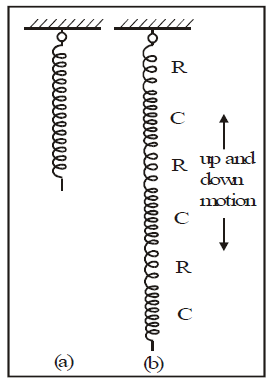 When a longitudinal wave passes through a medium, the medium is divided into the regions ofcompressions (C) and rarefactions (R) as shown in figure (b).

CompressionThe part or region of a medium, where the density of the medium is maximum or where the particles of the medium are very close to each other is known as compression. lt is denoted by C.

RarefactionThe part or region of a medium, where the density of the medium is minimum or where the particles of the medium are far apart from each other is known as rarefaction. It is denoted by R. 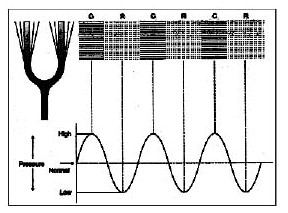 Sound needs a medium to travelWe have learnt that sound travels from one place to another place when the energy is transferred from one particle to another particle of a medium like air or gas, liquid, solid etc. It means, sound needs a material medium for its propagation. In other words, sound cannot travel through vacuum.

Demonstration to show that sound waves cannot travel through vacuum.Put an electric bell inside a closed Bell jar connected with a vacuum pump. Initially, air from the jar is not taken out. Connect the electric bell with a battery (Figute). It rings and the sound produced is heard by us.

Now start evacuating the air from a Bell jar using a vacuum pump, we will hear less and less sound. i.e. the loudness of the sound decreases. When there is no air in the Bell jar, we do not hear sound. This activity demonstrates that sound waves require material medium (in this case air) for its propagation.