The document Properties Of Matter & Their Measurement Notes | EduRev is a part of the JEE Course Chemistry Class 11.
All you need of JEE at this link: JEE

Fundamental units are those units which can neither be derived from one another nor they can be further resolved into any other units.

The International System of Units (in French Le Systeme International d’Unites– abbreviated as SI) was established by the 11th General Conference on Weights and Measures (CGPM from Conference Generale des Poids at Measures).The SI system has seven base units. 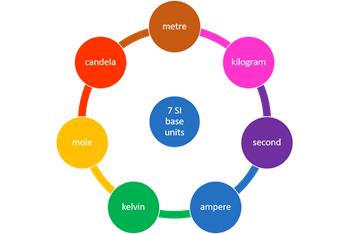 The Seven Fundamental Units of measurement in S.I. system.

Definitions of S.I. Base Units

Derived units: Some quantities are expressed as a function of more than one fundamental unit known as derived units.Example: velocity, acceleration, work, energy, area, density, etc.

Question 1:The temperature at which both the Celsius and Fathrenheit scales will have the same reading is
Explanation

Question 2:Pressure is determined as force per unit area of surface. The SI unit of pressure, pascal is as shown below:
1Pa = 1Nm-2
If the mass of air at sea level is 1034 g cm-2, the pressure in pascal is
Explanation

Pressure is the force (i.e., weight) acting per unit area But weight = mg

Question 4:N kg-1 is the unit of
Explanation

Question 5:Which of the following is correct?
Explanation

Question 6:The units, nanometer, Fermi, Angstrom and attometre, Arrangement in decreasing order are expressed as
Explanation

Question 7:Dimensions of pressure are same as that of
Explanation