(a) Size and shape of colloidal particles.

(b) Wavelength of the source of light.

(c) Method of preparation of the colloidal solution.

(d) Nature of the colloidal solution.

(e) The way an observer receives the light, i.e., whether by reflection or by transmission.

(v) Stability : Colloidal solutions are quite stable. Only a few solutions of larger particles may settle but very slowly.

(i) Finest gold is red in colour. As the size of particles increases, it becomes purple.

It should be noted that Brownian movement does not change with time but changes with temperatures.

(i) Brownian movement is a direct demonstration of the assumption that the molecules in a gas or solution are in a state of constant ceaseless motion. Thus it confirms kinetic theory.

(ii) Brownian movement does not allow the colloidal particles to settle down due to gravity and thus is responsible for their stability.

(iii) Brownian movement helps to calculate the Avogadro's number (Detail beyond the scope of the book).

(b) Sedimentation : Heavier sol. particle tend to settle down very slowly under the influence of gravity. This phenomenon is called sedimentation. 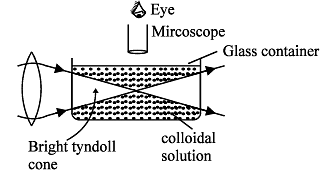 The Tyndall effect is observed under the following conditions :

(i) The diameter of the dispersed particles must not be much smaller than the wavelength of light employed.

(ii) The refractive indices of the dispersed phase and the dispersion medium must differ widely. This condition is fulfilled by lyophobic colloids.

It is important to note that Tyndall effect is not shown by true solutions as their particles are too small to cause scattering. Tyndall effect has been used in devising ultramicroscope and in determining the number of colloidal particles in a colloidal solution.

Origin of charge : Various reasons have been given regarding the original of charge on the colloidal particles. These are given below :

(i) Frictional electrification : It is believed to be frictional due to the rubbing of the dispersed phase particles with medium molecules.

(ii) Dissociation of the surface molecules : It leads to electric charge on colloidal particles. For example, an aqueous solution of a soap (sodium palmitate) dissociates into ions.

The Na  ions pass into the solution while C15H31COO— ions have a tendency to form aggregates due to weak attractive forces present in the hydrocarbon chains. Thus, the anions which are of colloidal size bear negative charge.

(iv) Capture of electron : It is from air during preparation of sol. by Bredig's arc method.

(v) Dissociation of molecular electrolytes on the surface of particles : H2S molecules get adsorbed on sulphides during precipitation. By dissociation of H2S, H  ions are lost and colloidal particles become negatively charged.

The two electrical properties of colloidal solutions are :

(a) Electrophoresis or Cataphoresis and (b) Electro-osmosis 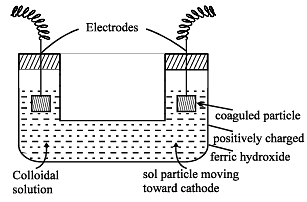 The phenomenon involving the migration of colloidal particles under the influence of electric field towards the oppositie charged electrode, is called electrophoresis or cataphoresis.

(b) Electro-osmosis : The phenomenon involving the migration of the dispersion medium and not the colloidal particles under the influence of an electric field is electro-osmosis.

(c) Coagulation : the colloidal sols are stable due to the presence of electric charges on the colloidal particles. Because of the electrical repulsion, the particles do not come close to one another to form precipitates. The removal of charge by any means will lead to the aggregation of particles and hence precipitation will occur immediately.

This process by means of which the particles of the dispersed phase in a sol. are pecipitated is known as coagulation.

If the coagulated particles instead of settling at the bottom of the container, float on the surface of the dispersion medium, the coagulation is called flocculation.

Most of the sols are coagulated by adding an electrolyte of opposite sign. This is due to the fact that the colloidal particles take up the ions of electrolyte whose charges are opposite to that on colloidal particles with the result that charge on the colloidal particles is neutralized. Thus coagulation takes place. For example, arsenius sulphide sol. (negatively charged) precipitated by adding barium chloride solution. It is due to the fact that the negatively charged particles of the sol. take up barium ions and get neutralized which lower the stability. As a result precipitation takes place.

It is observed that different amounts of different electrolytes is required to bring coagulation of a particular solution.

The reciprocal of coagulation value is regarded as the coagulating power.

The coagulation values of a few electrolytes for negatively charged arsenic sulphide and positively charged ferric hydroxide sol. are given in table given below. The valency of the coagulation ion (the ion whose charge is opposite to that of the colloidal particles) is also give.

Hardy-Schulz rules : H. Schulze (1882) and W.B. Hardy (1900) suggested the following rules to discuss the effect of electrolytes of the coagulation of the sol.

(1) Only the ions carrying charge opposite to the one present on the sol. particles are effective to cause coagulation, e.g., the negative charged sol. is best coagulated by cations and a positive sol. is coagulated by anions.

(2) The charge on coagulating ion influences the coagulation of sol.

After observing the regularities concerning the sing and valency of the active ion, a law was proposed by Hardy and Schulz which is termed as Hardy-Schulze law which is stated as follows:

"Higher is the valency of the active ion, greater will be its power to precipitate the sol."

Some other methods of coagulation :

Apart from the addition of electrolyte, coagulation can also be carried out by following methods:

(ii) By mutual coagulation of colloids : When two sols of opposite charges are mixed together in a suitable proportion, the coagulation takes place. The charge of one is neutralized by the other. For example, when negatively charged arsenic sulphide sol. is added to positively charged ferric hydroxide sol., the precipitation of both occurs simultaneously.

(iii) By electrical method : If the electrical charge of lyophobic sol. is removed by applying any electric field such as in electrophoresis, they also precipitate out.

Lyophilic sols are more stable than the lyophobic sols. This is because, lyophilic colloids are extensively hydrated and these hydrated particles do not combine to form large aggregates. 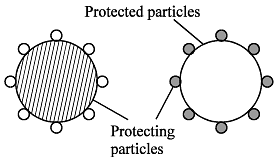 The hydrogen ion concentration at which the colloidal particles are neither positively charged nor negatively charged (i.e. uncharged) is known as isoelectric point of the colloid. At this point lyophilic colloid is expected to have minimum stability because at this point particles have no charge. The isoelectric point of gelatin is 4.7. This indicates that at pH = 4.7, gelating has no electrophoretic motion. Below 4.7, it moves towards the cathode and above 4.7 it moves forwards the anode. It is not always true, e.g., silicic acid has been found to have maximum stability at the isoelectric point.

The surface of a colloidal particle acquires a positive or a negative charge by selective adsorption of ions carrying +ve or -ve charges respectively. The charged layer attracts counter ions from the medium which forms a second layer. Thus, an electrical double layer is formed on the surface of the particles i.e., one due to absorbed ions and the other due to oppositely charged ions forming a diffused layer. This layer consists of ion of both the signs, but its net charge is equal and opposite to those absorbed by the colloidal particles. The existence of charges of opposite signs on the fixed and diffused parts of the double layer creates a potential between these layers. This potential difference between the fixed charge layer and diffused layer of opposite change is called electro-kinetic potential or zeta potential. 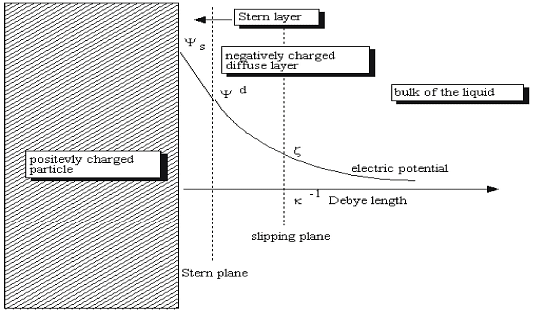