Q.1. A plate in equilibrium is subjected to uniform stresses along its edges with magnitude σxx = 30 MPa and σyy = 50 MPa as shown in the figure.

So the answer is (d).Q.2. A 2 m long, axially loaded mild steel rod of 8 mm diameter exhibits the load-displacement (P-δ) behaviour as shown in the figure. 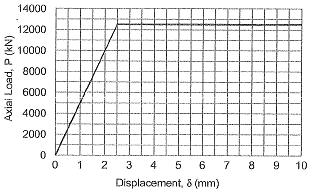 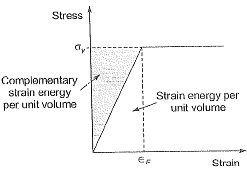 Note: For linear elastic material both complementary energy and strain energy is the same.

By considering the given graph in question, between Axial Load and Displacement, the solution will be as follows: 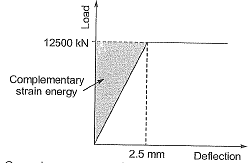 It means there seems some error in the given data.Q.3. In a material under a state of plane strain, a 10 x 10 mm square centred at a point gets deformed as shown in the figure. 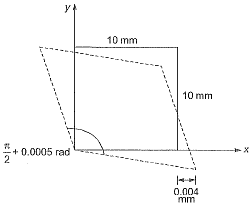 In question, since angle has been increased, therefore, shear strain should be negative.

Q.4. Consider the stepped bar made with a linear elastic material and subjected to an axial load of 1 kN, as shown in the figure. 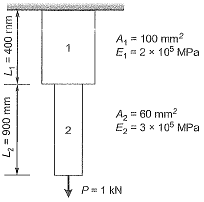 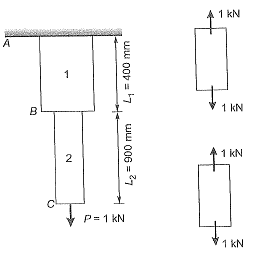 Try yourself:An elastic bar of length L, uniform cross-sectional area A, coefficient of thermal expansion α, and Young’s modulus Eis fixed at the two ends. The temperature of the bar is increased by T, resulting in an axial stress σ. Keeping all other parameters unchanged, if the length of the bar is doubled, the axial stress would be _______. [2017 : 1 Mark, Set-I]
Explanation

∴ The length has no effect on thermal stress.
∴ Axial stress is only ‘σ’.

View Solution
Try yourself:An elastic isotropic body is in a hydrostatic state of stress as shown in the figure. For no change in the volume to occur, what should be its Poisson’s ratio?
[2016 : 2 Marks, Set-II] 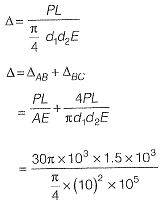 Try yourself:The values of axial stress (σ) in kN/m2, bending moment (M) in kNm, and shear force (V) in kN acting at point P for the arrangement shown in the figure are respectively.
[2014 : 2 Marks, Set-II] 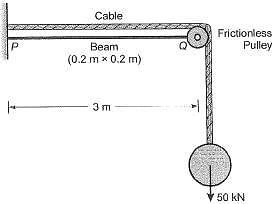 View Solution
Try yourself:A box of weight 100 kN shown in the figure is to be lifted without swinging. If all forces are coplanar, the magnitude and direction (θ) of the force (F) with respect to x-axis should be    [2014 : 2 Marks, Set-I]

For no swinging force should be balanced, i.e.,

Creep strains occur with time at a constant level of stress. So they occur due to permanent load, i.e., Dead Load.

View Solution
Try yourself:A rigid beam is hinged at one end and supported on linear elastic springs (both having a stiffness of 'K) at points T and ‘2’, and an inclined load acts at ‘2’, as shown.

View Solution
Try yourself: A rigid beam is hinged at one end and supported on linear elastic springs (both having a stiffness of 'K) at points T and ‘2’, and an inclined load acts at ‘2’, as shown.

The free diagram of the beam is shown below: 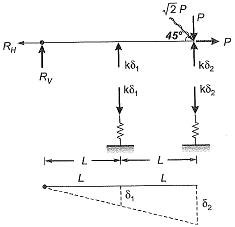 From similar triangles, we get: