The document Properties of Sound Class 9 Notes | EduRev is a part of the Class 9 Course Science Class 9.
All you need of Class 9 at this link: Class 9

CHARACTERISTICS OF A SOUND WAVE

When a sound wave travels through a material medium, then the density or pressure of the medium changes continuously from maximum value to minimum value and vice-versa. Thus, the sound wave propagating in a medium can be represented as shown in figure.

Now, we shall discuss the characteristics or quantities to describe a sound wave.

(i) Amplitude : The maximum displacement of a vibrating body or particle from its rest position (i.e. mean position) is called amplitude. In S.I., unit of amplitude is metre (m).

(iii) Frequency : The number of oscillations or vibrations made by a vibrating body or particles of a medium in one second is known as the frequency of a wave. It is denoted by u (read as Neu). In S.I., unit of frequency is hertz (Hz).

1 hertz = one oscillation completed by a vibrating body or a vibrating particle in one second.

(iv) Pitch or Shrillness : Pitch is the characteristic (i.e., typical feature) of a sound that depends on the frequency received by a human ear.

Loudness is a subjective quantity : It depends on the sensitivity or the response of our ears. A loud sound to a person may be a feeble sound for another person who is hard of hearing.

(vi) Timbre or quality : Quality or timbre is a characteristic (i.e., a typical feature) of a sound which enables us to distinguish between the sounds of same loudness and pitch. 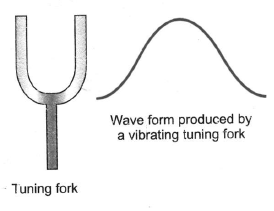 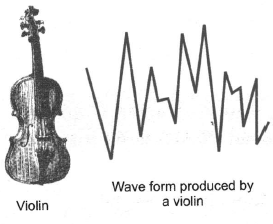 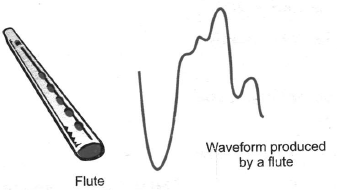 (vii) Intensity : Intensity of a sound is defined as the sound energy transferred per unit time through a unit area placed perpendicular to the direction of the propagation of sound.

That is, intensity of sound

Intensity of a sound is an objective physical quantity. It does not depend on the response of our ears.

We have seen above that sound can travel through solids, liquids and gases. The question which comes to mind is how fast does sound travel? Sound travels at different speeds in different media.

The speed of sound depends on the following factors :

The properties (or nature) of the medium. The order of the speed of sound is

In any medium, the speed of sound is increases with a rise in temperature.

Speed of sound in various media 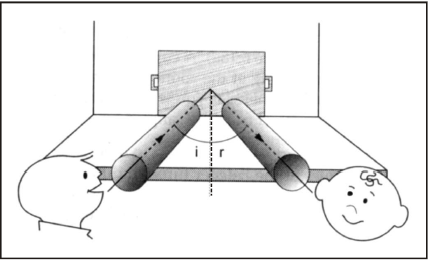 Just like light, sound is reflected by the solid and liquid surfaces. The reflection of sound obeys the laws of reflection.

The laws of reflection of sound are as follows :

EchoIf we clap our hands while standing at some distance from a high and huge wall or a hill, we hear the clapping of our hands again after some short interval of time. The sound of clap heard by us is known as echo. Echo is produced due to the reflection of sound.

Thus, echo is a repetition of sound due to the reflection of original sound by a large and hard obstacle.

Conditions for the production of an echo

1. Time gap between the original sound and the reflected sound

We can hear the two sounds separately if the time gap between these two sounds is more than 1/10 s or 0·1 s. The time interval equal to 0·1 s is known as persistance of hearing. This means, the impression of any sound heard by us remains for 0·1 s in our brain. If any other sound enters our ears before 0·1 s, then the second sound will not be heard by us. Thus, the echo will be heard if the original sound reflected by an obstacle reaches our ears after 0·1 s.

2. Distance between the source of sound and obstacle

LetDistance between the observer and the obstacle = d

Speed of sound (in the medium) = v

Time after which echo is heard = t

For an echo to be heard distinctly,

Thus, the minimum distance (in air at 25°C) between the observer and the obstacle for the echo to be heard clearly should be 17.2 m.

The speed of sound increases with a rise in temperature. Therefore, the minimum distance in air between the observer and the obstacle for an echo to be heard clearly at temperatures higher than 25°C is more than 17.2m. In rooms having walls less than 17.2 m away from each other, no echo can be heard.

3. Nature of the obstacle : For the formation of an echo, the reflecting surface or the obstacle .must be rigid such as a building, hill or a cliff.

The repeated reflection that results in the persistence of sound in a large hall is called reverberation.

Excessive reverberation in any auditorium/hall is not desirable because the sound becomes blurred and distorted. The reverberation can be minimised/reduced by covering the ceiling and walls with sound absorbing materials such as, fiber-board, rough plaster, draperies, perforated carboard sheets etc.

Uses of multiple Reflection of sound1. Megaphone : Megaphone is a device used to address public meetings. It is a orn-shaped. When we speak through megaphone, sound waves are reflected by the megaphone. These reflected sound waves are directed towards the people (or audience) without much spreading. 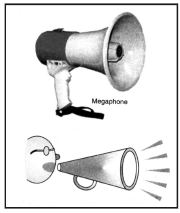 3. Sound boards : Sound boards are curved surfaces (concave) which are used in a big hall to direct the sound waves towards the people sitting in a hall. The speaker is (i.e. source of sound) placed at the focus of the sound board as shown in figure.

Sound waves from the speaker are reflected by die sound board and these reflected waves are directed towards the people (or audience). 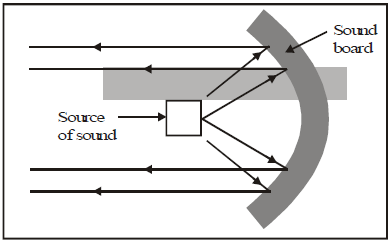 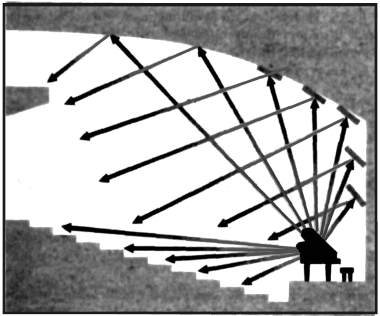