The document Proteins - Biomolecules Chemistry Notes | EduRev is a part of the Chemistry Course Organic Chemistry.
All you need of Chemistry at this link: Chemistry

(A) Classification and Chemistry of Protein Structure 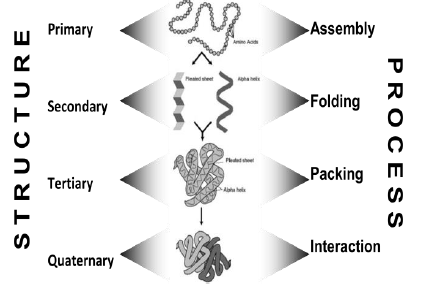 It is linear, ordered and one dimensional. It is by convention, written from amino end to carboxyl end. A perfectly linear amino acid polymer is neither functional nor energetically favorable → folding!

It occurs in the cytosol and involves localized spatial interaction among primary structure elements, i.e. the amino acids. It may or may not involve chaperone proteins. It tumbles towards conformations that reduce ΔE (this process is thermo-dynamically favorable) and yields secondary structure.

Secondary structure is non-linear and 3 dimensional. It localized to regions of an amino acid chain. It is formed and stabilized by hydrogen bonding, electrostatic and van der Waals interactions. Protein packing occurs in the cytosol (~60% bulk water, ~40% water of hydration). It involves interaction between secondary structure elements and solvent. It may be promoted by chaperones, membrane proteins and tumbles into molten globule states. Overall entropy loss is small enough so enthalpy determines sign of ΔE, which decreases (loss in entropy from packing counteracted by gain from desolvation and reorganization of water, i.e. hydrophobic effect). Hence, yields tertiary structure.

Tertiary structure is non-linear and 3-dimensional. It is global but restricted to the amino acid polymer. It is formed and stabilized by hydrogen bonding, covalent (e.g. disulfide) bonding, hydrophobic packing toward core and hydrophilic exposure to solvent.

Protein interaction occurs in the cytosol, in close proximity to other folded and packed proteins. It involves interaction among tertiary structure elements of separate polymer chains. It may be promoted by chaperones, membrane proteins, cytosolic and extracellular elements as well as the proteins’ own propensities. ΔE decreases further due to further desolvation and reduction of surface area

Quaternary structure is non-linear and 3 dimensional. It is global, and across distinct amino acid polymers. It is formed by hydrogen bonding, covalent bonding, hydrophobic packing and hydrophilic exposure. It is favorable, functional structures occur frequently and have been categorized. (B) Classification based on protein function

The three-dimensional conformation of proteins is stabilized by bonds or interactions between R groups of amino acids within the molecule. Most of these bonds and interactions are relatively weak and they can be disrupted or broken. This results in a change to the conformation of the protein, which is called denaturation.

A denatured protein does not normally return to its former structure – the denaturation is permanent. Soluble proteins often become insoluble and form a precipitate.

Heat can cause denaturation: vibrations within the molecule breaks intramolecular bonds or interactions.

Extremes of pH can cause denaturation: charges on R groups are changed, breaking ionic bonds within the protein or causing new ionic bonds to form.

Thermophiles are organisms (often archea or eubacteria) that live in relatively hot conditions (45 to122°C). In order that they can survive, their proteins are stable at the higher than normal temperatures they experience.

Molecular chaperones are small proteins that help guide the folding and can help keep the new protein from associating with the wrong partner.

There are thousands and thousands of different combinations of amino acids that can make up proteins and that would increase if each one had multiple shapes. Proteins usually have only one useful conformation because otherwise it would not be efficient use of the energy available to the system. Natural selection has eliminated proteins that do not perform a specific function in the cell.

The conformation of a protein gives it a unique function. To work proteins must interact with other

molecules, usually one or a few molecules from the thousands to one protein. A family of proteins that can be made to bind to almost any molecule. Antibodies (immunoglobulins) are made in response to a foreign molecule ie. bacteria, virus, pollen… called the antigen. They bind together tightly and therefore, inactivates the antigen or marks it for destruction.

Concentration of antigen, antibody and antigen/antibody complex at equilibrium can be measured-equilibrium constant (K)

Enzymes are proteins that bind to their ligand as the 1st step in a process. An enzyme’s ligand is called a substrate. It may be one or more molecules. Output of the reaction is called the product. Enzymes can repeat these steps many times and rapidly, called catalysts.

 Non-covalent bonds hold the polysaccharide in the active site until the reaction occurs.

Step 1: Binding of the substrate KM – [S] that allows reaction to proceed at 1/2 it maximum rate.