PN JUNCTION WITH NO APPLIED VOLTAGE OR OPEN CIRCUIT CONDITION:

In a piece of semiconductor, if one half is doped by p-type impurity and the other half is doped by n-type impurity, a PN junction is formed. The plane dividing the two halves or zones is called PN junction. As shown in the fig1, the N-type material has high concentration of free electrons, while P-type material has high concentration of holes. Therefore at the junction there is a tendency of free electrons to diffuse over to the P-side and the holes to the N-side. This process is called

diffusion. As the free electrons move across the junction from N-type to P-type, the donor atoms become positively charged. Hence a positive charge is built on the N-side of the junction. The free electrons that cross the junction uncover the negative acceptor ions by filling the holes. Therefore a negative charge is developed on the P-side of the junction. This net negative charge on the P-side prevents further diffusion of electrons into the P- side. Similarly the net positive charge on the N-side repels the hole crossing from P-side to N-side. Thus a barrier is set up near the junction which prevents the further movement of charge carriers i.e. electrons and holes. As a consequence of induced electric field across the depletion layer, an electrostatic potential difference is established between P and N regions, which are called the potential barrier, junction barrier, diffusion potential or contact potential, Vo. The magnitude of the contact potential Vo varies with doping levels and temperature. Vo is 0.3V for Ge and 0.72 V for Si. It is noticed that the space charge layers are of opposite sign to the majority carriers diffusing into them, which tends to reduce the diffusion rate. Thus the double space of the layer causes an electric field to be set up across the junction directed from N to P regions, which is in such a direction to inhibit the diffusion of majority electrons and holes as illustrated in fig 1.7. The shape of the charge density, ρ, depends upon how diode is doped. Thus the junction region is depleted of mobile charge carriers. Hence it is called depletion layer, space region, and transition region. The depletion region is of the order of 0.5µm thick. There are no mobile carriers in this narrow depletion region. Hence no current flows across the junction and the system is in equilibrium. To the left of this depletion layer, the carrier concentration is p= NA and to its right it is n= ND. 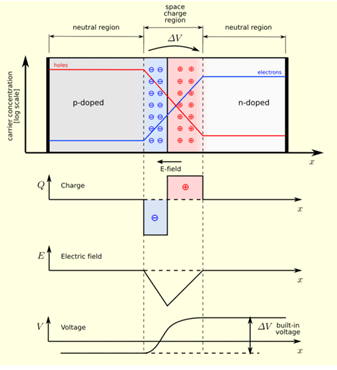