In the following pairs of triangles (Fig. 12 to 15), the lengths of the sides are indicated along sides. By applying SSS condition, determine which are congruent. State the result in symbolic form. (i) Is ∆ ABC ≅ ∆ CDA?
(ii) What congruence condition have you used?
(iii) You have used some fact, not given in the question, what is that?

We have used Side Side Side congruence condition with one side common in both the triangles.

Yes, we have used the fact that AC = CA.

1) Therefore PR = ED since the corresponding sides of congruent triangles are equal.

2) ∠QPR = ∠FED since the corresponding angles of congruent triangles are equal. Triangles ABC and PQR are both isosceles with AB = AC and PQ = PR respectively. If also, AB = PQ and BC = QR, are the two triangles congruent? Which condition do you use?
If ∠B = 50°, what is the measure of ∠R? 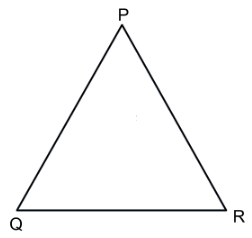 ABC and DBC are both isosceles triangles on a common base BC such that A and D lie on the same side of BC. Are triangles ADB and ADC congruent? Which condition do you use? If ∠BAC = 40° and∠BDC = 100°; then find ∠ADB.

In △ABC and △BAD we have,
AC = BD (given)
BC = AD (given)
and AB = BA (common)
Therefore by SSS criterion of congruency, △ABC ≅≅△BAD.
There option (iii) is true. We have AB = AC.
Also since D is the midpoint of BC, BD = DC.
And AD = DA.
Therefore by SSS condition, △ABD ≅△ADC△ABD ≅△ADC. Yes △ABC ≅△ACB  by SSS condition.
Since ABC is an isosceles triangle, AB = AC, BC = CB and AC = AB.

Triangles ABC and DBC have side BC common, AB = BD and AC = CD. Are the two triangles congruent? State in symbolic form. Which congruence condition do you use? Does ∠ABD equal ∠ACD? Why or why not?

No, ∠ABD and∠ACD are not equal
because AB ≠ AC. 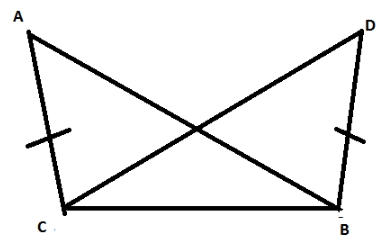 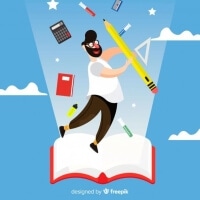