Assume that a 6-hour unit hydrograph (UH) of a catchment has been derived, whose ordinates are given in the following table and a corresponding graphical representation is shown in Figure 8. Assume further that the effective rainfall hyetograph (ERH) for a given storm on the region has been given as in the following table:

The direct runoff hydrograph can then be calculated by the three separate hyetographs for the three excess rainfalls by multiplying the ordinates of the hydrograph by the corresponding rainfall amounts. Since the rainfalls of 2cm, 4cm and 3cm occur in successive 6-hour intervals, the derived DRH corresponding to each rainfall is delayed by 6 hours appropriately.

These have been shown in the figures indicated. The final hydrograph is found out by adding the three individual hydrographs, as shown in Figure 12. 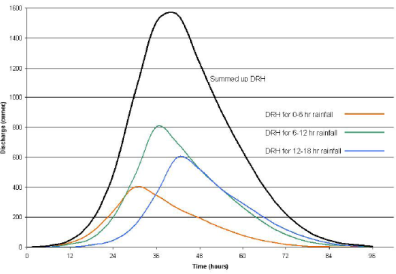 The calculations to generate the direct runoff hydrograph (DRH) from a given UH and ERH can be conveniently done using a spreadsheet program, like the Microsoft XL.

A sample calculation for the example solved graphically is given in the following table. Note the 6 hour shift of the DRHs in the second and subsequent hours.

The last column in the above table gives the ordinates of the DRH produced by the ERH.  If the base flow is known or estimated (Lesson 2.2), then this should be added to the DRH to obtain the 6-houly ordinates of the flood hydrograph.

This is a concept of the application of a hypothetical storm of 1 cm ERH of infinite duration spread over the entire catchment uniformly.  This may be done by shifting the UH by the T-duration for a large number of periods. The resulting hydrograph (a typical one is shown in Figure 13) is called the S – hydrograph, or the S – curve due to the summation of an infinite series of Thour unit hydrographs spaced T – hour apart. For the example of the UH given in the earlier section, the table below provides the necessary calculations. The average intensity of the effective rainfall producing the S – curve is 1/T (mm/h) and the equilibrium discharge is given as A/TX104m3 / h where, A is the area of the catchment in Km2 and T is the unit hydrograph duration in hours.

Application of the S – curve

Though the S – curve is a theoretical concept, it is an effective tool to derive a t – hour UH from a T – hour UH, when t is smaller that T or t is lager than T but not an exact multiple of T. In case t is a multiple of T, the corresponding UH can be obtained without the aid of a S – hydrograph by summing up the required number of UH, lagged behind by consecutive T – hours.

For all other cases shift the original S – hydrograph as derived for the T – hour UH by t hours to obtain a lagged S- hydrograph. Subtract the ordinates of the second curve from the first to obtain the t – hour graph. Next, scale the ordinates of the discharge hydrograph by a factor t/T, to obtain the actual t – hour UH which would result due to a total 1 cm of rainfall over the catchment. This is illustrated by the S-curve derived in the previous section.

Recall that the S-curve was obtained from a 6-hour UH. Let us derive the UH for a 3-hour duration. Since we do not know the ordinates of the S-curve at every 3-hour interval, we interpolate and write them in a tabular form as given in the table below:

An observed flood hydrograph at a streamflow gauging station could be a hydrograph resulting from an isolated intense short – duration storm of nearly uniform distribution in time and space, or it could be due to a complex rainfall event of varying intensities.  In the former case, the observed hydrograph would mostly be single peaked whereas for the latter, the hydrograph could be multi peaked depending on the variation in the rainfall intensities.  For the purpose of this course, we shall only consider rainfall to be more or less uniformly distributed in time and space for the purpose of demonstrating the derivation of unit hydrograph.  The procedure may be broadly divided into the following steps:

For catchments with insufficient rainfall or corresponding concurrent runoff data, it is necessary to develop synthetic unit hydrograph.  These are unit hydrographs constructed form basin characteristics.  A number of methods like that of Snyder’s had been used for the derivation of the Synthetic hydrographs.  However, the present recommendations of the Central Water Commission discourage the use of the Snyder’s method.

Instead, the Commission recommends the use of the Flood Estimation Reports brought out for the various sub–zones in deriving the unit hydrograph for the region.  These sub–zones have been demarcated on the basis of similar hydro – meteorological conditions and a list of the basins may be found.  The design flood is estimated by application of the design storm rainfall to the synthetic hydrograph developed by the methods outlined in the reports.

With the availability of personal computer high processing speed within easy reach of all, it is natural that efforts have been directed towards numerical modeling the catchment dynamics and its simulation.  It is not possible to outline each model in detail, but the general concept followed is to represent each physical process by a conceptual mathematical model which can be represented by an equivalent differential or ordinary equation.  These equations are solved by changing the equations to solvable form and writing algorithms in suitable computer language.  However, the user of the programs generally input data through a Graphical User Interface (GUI) since there is a lot of spatial information to be included like land-use, land-cover, soil property, etc.  Now a day, this information interaction between the user and the computer is through Geographic Information System (GIS) software.  Once the information is processed, the output results are also displayed graphically.

Though many of these models are sold commercially, there are quite a few developed by academic institutions and government agencies worldwide which are free and can be downloaded for non – commercial purposes through the internet.  A few examples are given below.

Water resources section of the Department of Civil Engineering, IIT Kharagpur has developed a watershed simulation model based on deterministic theory.  A copy of the same may be made available on request for educational purposes.