Naphtha is the most versatile chemical feedstock and its use depends on composition, boiling range, end use market requirements. Naphtha remains prominent feedstock (52%) for olefin production from steam cracker. Feedstock of olefins is shown in Figure M-I 2.3. Catalytic reforming of naphtha produces aromatics which is important chemical feed stock for organic chemical industries for producing synthetic fibre, pesticides explosive, dyes intermediate, plasticizer, solvent etc. Some of the routes for conversion of naphtha to petrochemicals are

Steam reforming/ Partial oxidation of naphtha: For production of synthesis gas and derivatives

Cracking of naphtha: For production of olefins, C4 and C5 hydrocarbons, pyrolysis gasoline for aromatic production 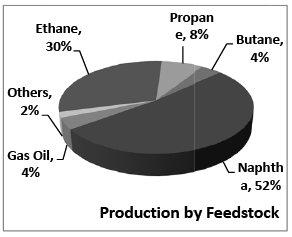 Kerosene as Feed Stock for Lab

Kerosene Pre-fractionation: To tailor the kerosene to desired carbon range

Hydrotreatment: To remove sulfur, nitrogen and olefins and oxygenates which might poison the Molex adsorbent.

Biomass resources like crop residues, forage, grass, crops, wood residues, forest residues, short rotation energy crops and cellulosic components of municipal solid waste can be use as alternative feedstock for production of synthesis gas, ethanol, and naphtha through FT process. Alternative energy resources will play a growing role and biofuels mainly ethanol are expected to grow rapidly, reaching about 2% of total liquid supplies by 2030 . Some of the routes for conversion of biomass to heat & power, transport fuels, bioethanol is given in Figure M-I 2.4 .The constantly depleting resources of conventional energy and the steeply escalating price of fossil fuels have led to the need of alternate energy sources. Second generation production of bioethanol production is gaining increasing impetus due to abundant availability, high cellulose d hemicelluloses content of lingo-cellulose materials [Tuil et al., 2008].  Biotechnological route for bioethanol production utilizing lingo cellulose material involves delignification, sacchrification and fermentation. The most common process of bioethanol production from sacchrified lingo cellulosics involves hydrolysis of cellulose and fermentation in the same reactor [Lo, 2009]. Options for Conversion of Biomass to Fuel and Power and Chemical feed stock is given in Figure M-I 2.5. 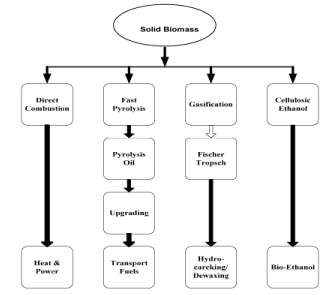 Figure M-I 2.5: Options for Conversion of Biomass to Fuel and Power and

There are three types of feedstocks for ethanol production [Tuli et al. 2008]

Biomass can be also used a feedstock for methanol production and hydrogen through synthesis gas produced from biomass gasifiers.

Direct to Ethanol technology, a novel technology developed by Algenol is in Pilot plant testing at Dow Chemical’s Freeport, Texas to produce ethanol by photosynthesis from CO2, H2O and sunlight instead of producing carbohydrates [Dutta, 2011]

Coal is another promising feed stock as huge amount of coal reserves is available in India and other part of the world. Based on the production of coal gasification unit it will be possible to to produce large number of chemicals. Possibility Coal as a source of petrochemicals, which again explored all over the world [Handa and Ganesh, 2010] Coal was the original feed stock for production of large number of chemicals through coke oven plants, synthesis gas from gasification, acetylene fro calcium carbide route. However, due to availability of petroleum based raw material presently more than 90% of chemicals are produce from petroleum and natural gas. Due to volatile market of crude oil and dwindling petroleum resources, coal is emerging as alternative feedstock for chemical industry as huge coal reserves are available all over the world. Various routes for utilization of coal as chemical feedstock and fuel are [Duchesne, 2011, Patil, 2009, Furimsky, 1999]:

Due to the use of heavy crude oil, huge amount of petrocoke is being produce from the thermal cracking process in the refinery. Although petrocoke is being used as fuel in cement industry however it can be a promising raw material for production of synthesis gas, hydrogen, methanol through petrocoke gasification. Through FT synthesis the synthesis gas can be converted to fuel also. Utilization of petrocoke offers an alternative to handle high sulfur and metal containing residues in a refinery with value addition. Reliance is already in process of implementing petrocoke gasification to utilize its petrocoke.