The document Receivers Notes | EduRev is a part of the GATE Course Communication System.
All you need of GATE at this link: GATE

This unit centres around basic principles of the superheterodyne receiver. In this article, we will discuss the reasons for the use of the superheterodyne and some topics of its design, such as the choice of intermediate frequency, RF stage, oscillator tracking, bandspread tuning and frequency synthesis. Most of the information is standard textbook material but put together as an introductory article, it can provide somewhere to start if you are contemplating building a receiver.

Early valve radio receivers were Tuned Radio Frequency (TRF) type consisting of one or a number of tuned radio frequency stages with individual tuned circuits which provided the selectivity to separate the received signal from others. The tuned circuits are segregated by the radio frequency (RF) amplifier stages and the last tuned circuit provided for the AM detector stage. This receiver was used before introduction of the screen grid valve and it is interesting to observe the grid-plate capacity neutralisation applied to the triode RF amplifiers to maintain amplifier stability. In these early receivers, the individual tuning capacitors were separatley attached to tuning dials, and each of these dials had to be reset each time a different station was selected. Designs evolved for receivers with only one adjustable dial, achieved by various methods of mechanical ganging the tuning capacitors, including the ganged multiple tuning capacitors with a common rotor shaft as used today.

The bandwidth of tuned circuit for the given Q is directly proportional to its operating frequency and hence, as higher and higher operating frequencies came into use, this is difficult to reach enough selectivity using the TRF Receiver system.

The Superheterodyne receiver was first evolved by Major Edwin Howard Armstrong, in 1918 and gradually phased out the TRF receiver during the 1930s.

A good receiver has at least one tuned RF amplifier stage ahead of the first mixer. As already discussed, one function of the RF stage is to reduce the image frequency level into the mixer. The RF stage also carries out a number of other useful functions: 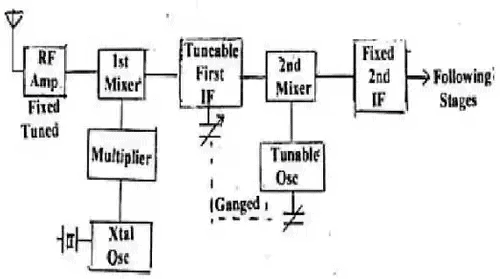