Page No 19.44:Question 20:The Trial Balance prepared by a Book-keeper showed a difference of ₹ 1,006 which was placed in a newly opened Suspense Account and carried forward to the next year, when the following errors were discovered:-(i) Goods purchased for ₹ 99 had been posted to the credit of the supplier as ₹ 990.(ii) ₹ 75 received as discount from a creditor was duly entered in his account but it was omitted to be posted to discount account.(iii) Sale of Furniture for ₹ 1,400 had been entered in sales book.(iv) ₹ 900 due from a customer were omitted to be taken to the Schedule of sundry debtors.(v) Goods of the value of ₹ 3,000 returned by a customer were taken into the stock but no entry was made in the books.(vi) ₹ 355 entered in the Sales Returns book had been posted to the debit of the customer who returned the goods.Give necessary Journal entries to rectify the above errors and prepare suspense account.ANSWER:One Sided Errors 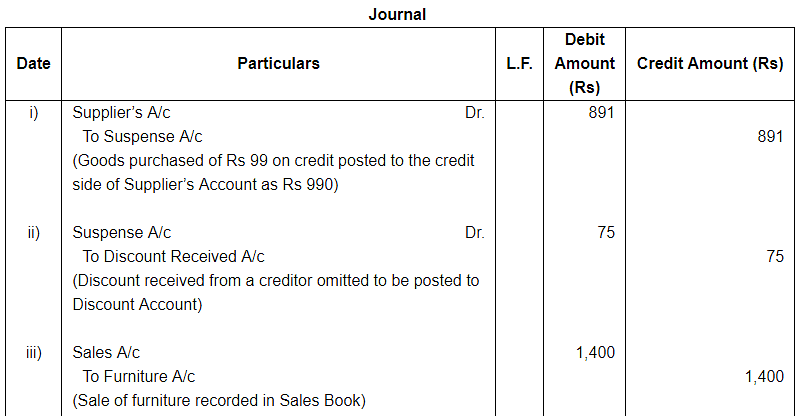 Question 21:A book-keeper finds that the debit side of the trial balance is short of ₹ 308 and so for the time being, he balances the side by putting the difference to suspense account. Subsequently, the following errors were disclosed:(a) An entry for sale of goods for ₹ 102 to Madhav was posted to his account as ₹ 120.(b) ₹ 100 being the discount allowed to customers were credited to discount received account in the ledger.(c) ₹ 275 paid by Madhav were credited to Jadav's account.(d) ₹ 26 appearing in the cash book as paid for the purchase of stationery for office use have not been posted to ledger.(e) The debit side of purchases account was under-cast by ₹ 100.You are required to make the necessary journal entries and the suspense account.ANSWER:One Sided Errors 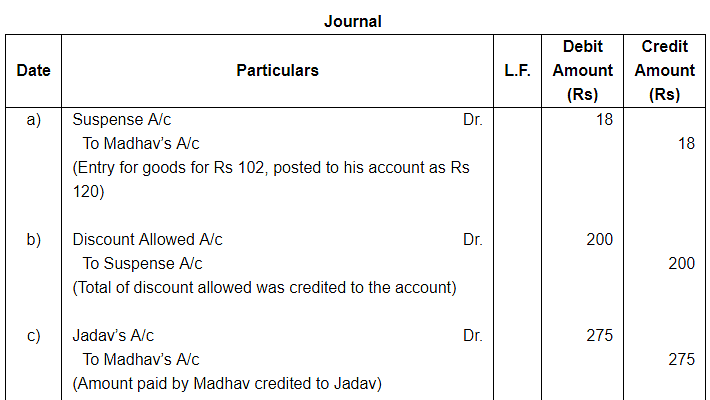 Question 22:The accountant of X prepared the Trial Balance at the end of the year on 31st March, 2015. But there was a difference and the accountant put the difference in a Suspense Account. Rectify the following errors found and prepare the Suspense Account:(a) The total of the returns outward book ₹ 420 has not been posted in the ledger.(b) A purchase of ₹ 350 from Y has been entered in the sales book. However Y's Account has been correctly entered.(c) A sale of ₹ 390 to Z has been credited to his account ₹ 290.(d) Old furniture sold for ₹ 5,400 had been posted as ₹ 4,500 in Sales Account.(e) Goods taken by the proprietor ₹ 500 have not been entered in the books at all.ANSWER:One Sided Errors

Page No 19.45:Question 23:Trial Balance of Anuj did not agree. It showed an excess credit of ₹ 6,000. He put the difference to Suspense Account. He discovered the following errors.(a) Cash received from Ravish ₹ 8,000 posted to his account as ₹ 6,000.(b) Returns Inwards book overcast by ₹ 1,000.(c) Total of Sales Book ₹ 10,000 was not posted to Sales Account.(d) Credit purchases from Nanak ₹ 7,000 were recorded in Sales Book. However, Nanak's Account was correctly credited.(e) Machinery purchased for ₹ 10,000 was posted to Purchases Account as ₹ 5,000. Rectify the errors and prepare Suspense Account.ANSWER:One Sided Errors 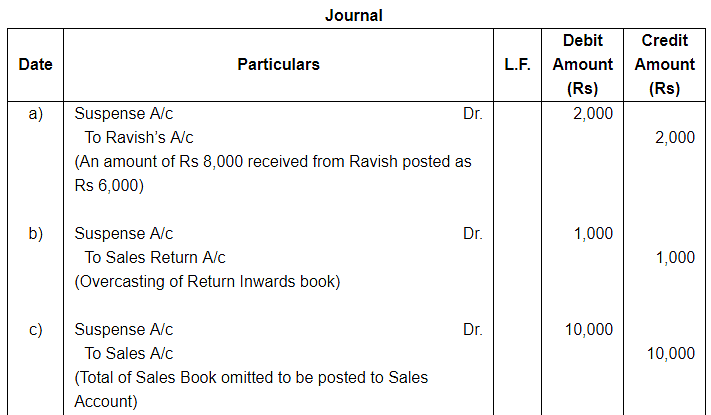 Question 24:Trial Balance of Madan did not agree and he put the difference to Suspense Account. He discovered the following errors:(a) Sales Returns book overcast by ₹ 800.(b) Purchases returns to Sahu ₹ 2,000 were not posted to his account.(c) Goods purchased on credit from Narula ₹ 4,000 though taken into stock, but no entry was passed in the books.(d) Installation charges on new machinery purchased ₹ 500 were debited to sundry expenses account as ₹ 50.(e) Rent paid for residential accommodation of Madan (the proprietor) ₹ 1,400 was debited to Rent A/c as ₹ 1,000.Rectify the errors and prepare Suspense Account to ascertain the difference in Trial Balance.ANSWER:One Sided Errors 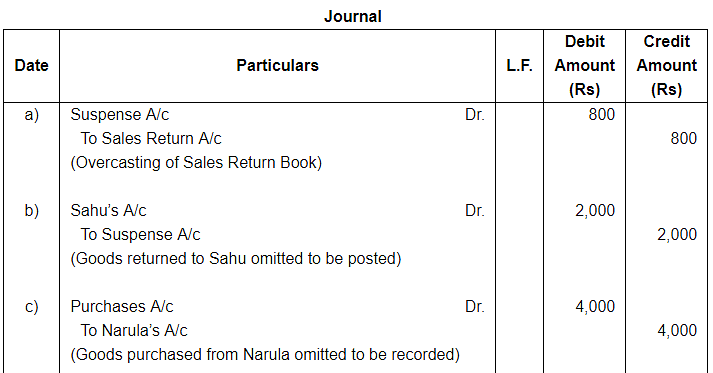 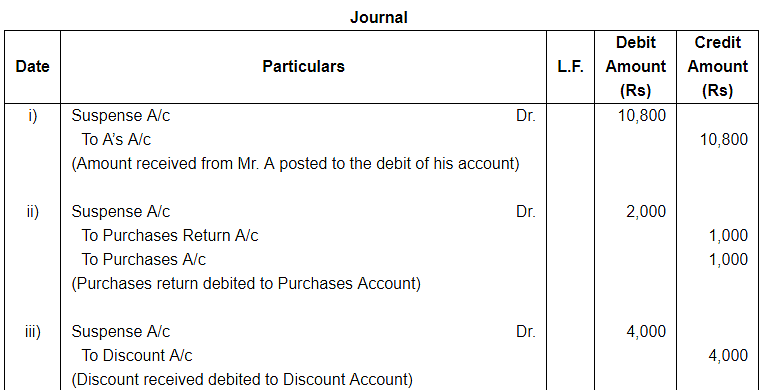 Page No 19.46:Question 26:Rajesh Kumar was unable to reconcile his Trial Balance as on 31st March 2014 and has opened a suspense account from the difference. Later on the following errors were discovered:-(1) There were three compensating errors:-(a) The total of Sales Return Book was overcast by ₹ 100.(b) The total of one page of the Purchase Book was carried forward as ₹ 1,286 instead of ₹ 1,826.(c) Goods purchased from C for ₹ 400 was debited to his account as ₹ 40.(2) ₹ 425 paid for wages to workmen for making office table were debited to wages account.(3) Rent paid ₹ 1,500 were posted to the credit of Rent account as ₹ 150.(4) Cash received from Ghanshyam ₹ 500 were correctly recorded in cash book but were posted to his account as ₹ 50.(5) ₹ 720 paid to Kamal has been debited to Kamlesh A/c as ₹ 520.(6) The total of Purchase Return Book ₹ 2,500 was left unposted.Pass rectifying entries and prepare Suspense A/c.ANSWER:One Sided Errors 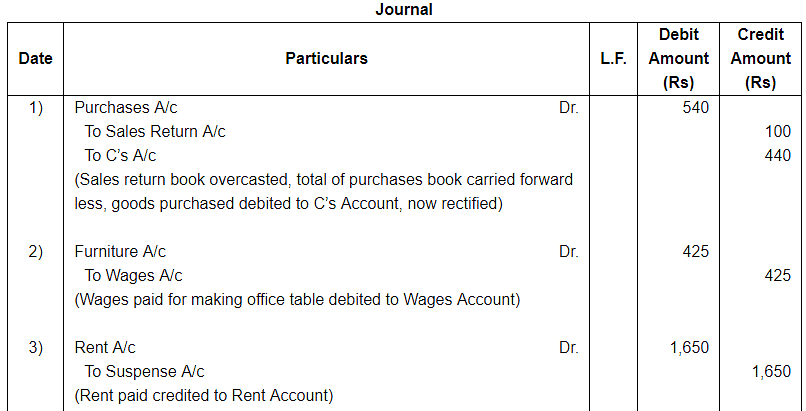 Question 27:A Trial Balance showed excess credit of ₹ 2,728, which were placed in a suspense account. Later on the following errors were located. Pass rectifying entries and prepare Suspense A/c.1. ₹ 825, the total of purchase return book has been posted to the debit of sales return account.2. Goods purchased from Suresh ₹ 1,800 recorded in Sales Book as ₹ 180.3. An item of ₹ 328 written off as a bad debt from Ajay Sharma has not been debited to Bad Debts Account.4. Goods purchased from X ₹ 3,500 and from Y ₹ 4,000, but were recorded in the purchase book as X ₹ 4,000 and Y ₹ 3,500.5. Goods returned to Ramesh for ₹ 2,600 was correctly recorded in the return outward book but was wrongly posted to his account as ₹ 260.6. A sum of ₹ 2,210 stolen by an ex-employee stand debited to Suspense A/c.7. A sum of ₹ 500 written off as depreciation on Machinery, were not posted to Machinery account.ANSWER:One Sided Errors 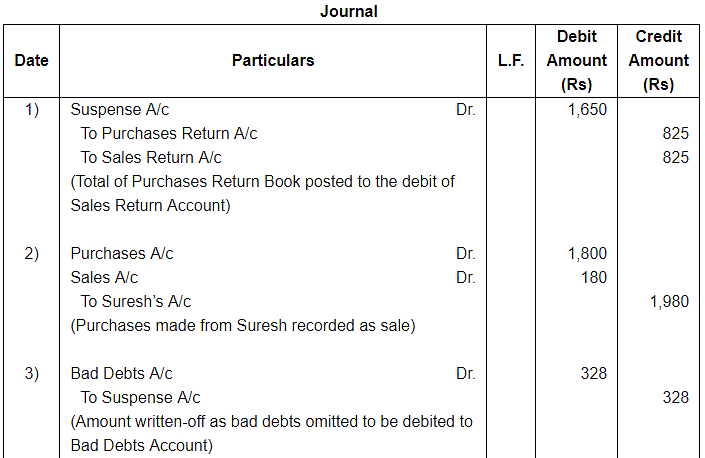 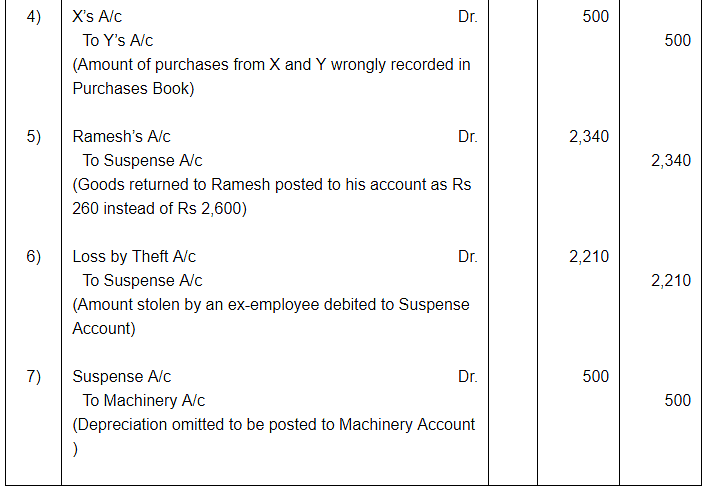 Question 28:A Book-keeper finds the difference in the Trial Balance amounting to ₹ 210 and puts it in the suspense account. Later on he detects the following errors. Rectify these and prepare the Suspense Account:-1. Goods purchased from Ram ₹ 700 was passed through sales book.2. Returned goods to Shyam ₹ 1,500 was passed through returns inward book.3. An Item of ₹ 450 relating to prepaid rent account was omitted to be brought forward.4. An Item of ₹ 120 in respect of purchase returns, instead of being recorded in Returns outward book has been wrongly entered in the purchase book and posted therefrom to the debit of Personal A/c.5. Amount payable to Subhash for repairs done to radio ₹ 180 and a new radio supplied for ₹ 1,920, were entered in the Purchase book as ₹ 2,000.

Give full narrations for rectifying journal entries. Which of the above errors affected the agreement of Trial Balance?ANSWER:One Sided Errors 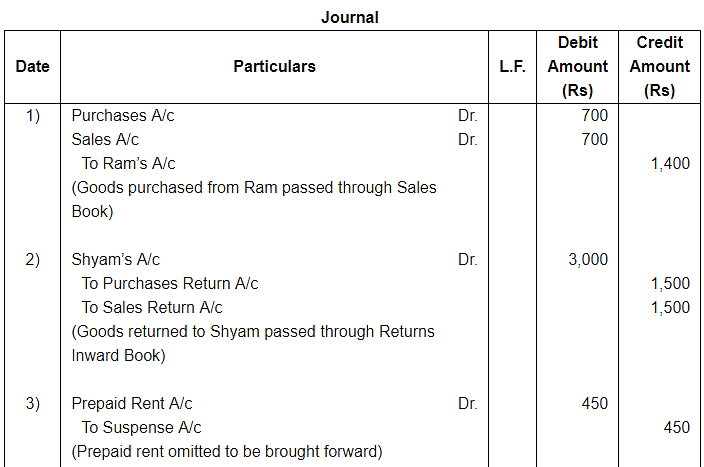 Note: Item number 3 & 4 affected the agreement of Trial Balance.Page No 19.47:Question 29:In taking out a Trial Balance, an Accountant finds an excess debit of ₹ 1,098. Being desirous of closing his books, he places the difference to Suspense A/c. Later on he detects the following errors:-1. Goods purchased from Surinder for ₹ 350 has been credited to his account as ₹ 530.2. Goods sold to Dinesh for ₹ 800 have been debited to his account as ₹ 880.3. A cheque of ₹ 1,250 received from a debtor had been correctly entered in the cash book but posted to his Personal A/c as ₹ 1,200.4. ₹ 780, paid for freight on machinery purchased was debited to Freight Account as ₹ 708.5. Goods to the value of ₹ 130 returned by a customer Navin Kumar had been posted to the debit of his account.6. ₹ 1,440 paid for repairs to Motor Car were debited to Motor Car A/c as ₹ 1,400.7. Total of purchase return book ₹ 500 was posted to the debit of Purchase A/c.Give necessary rectifying entries and prepare suspense account.ANSWER:One Sided Errors 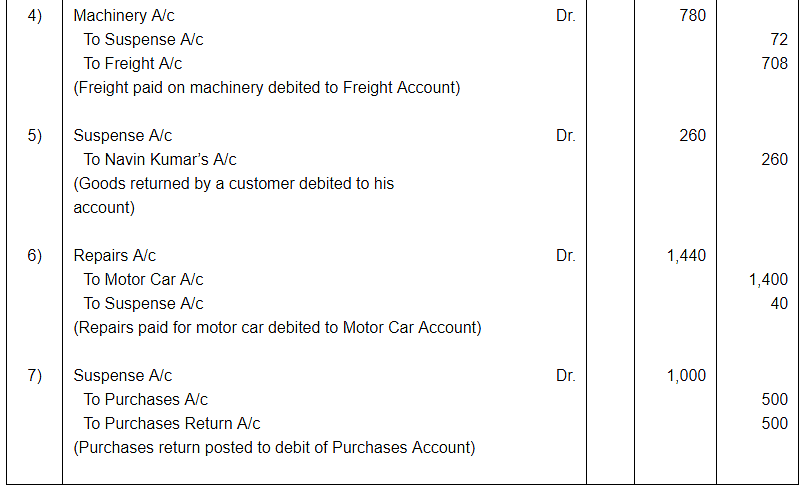 Question 30:A Book-keeper finds that the totals of his trial balance disagree by ₹ 2,800. He temporarily debits a Suspense Account with this amount and closes the books. On an examination of the books, the following errors are discovered:-1. The total of Purchase Return Book ₹ 710 was posted Twice.2. Goods costing ₹ 800 were distributed as free samples but no entry was passed in the books.3. Purchase of Machinery for ₹ 5,600 on credit was recorded in Purchase Book as ₹ 6,500.4. Cash Sales to Ram Lal for ₹ 1,200 were recorded in Cash Book as well as in Sales Book and were posted from both.5. Closing Stock has been overvalued by ₹ 1,500.6. Sales Return Book was untotalled, though personal accounts were posted ₹ 1,580.7. No entries have been made in the Cash Book for the Insurance Premium directly paid by bank ₹ 700 and interest charged on overdraft ₹ 320.8. A sum of ₹ 200 for Drawings on the Credit Side of Cash Book was not posted to the Drawings account.Pass entries to rectify the above errors. Close the Suspense Account already opened.ANSWER:One Sided Errors 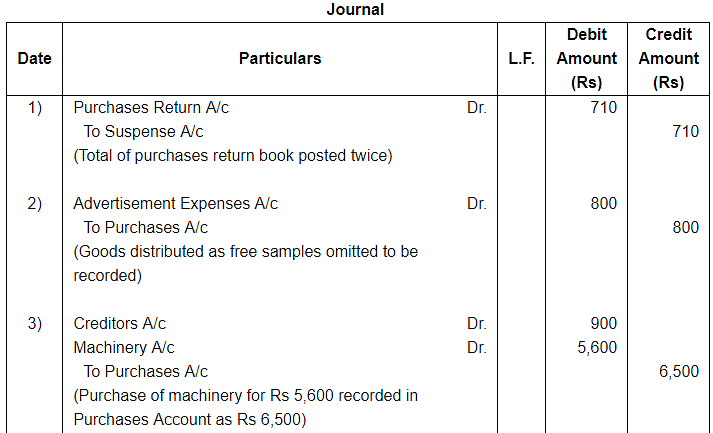 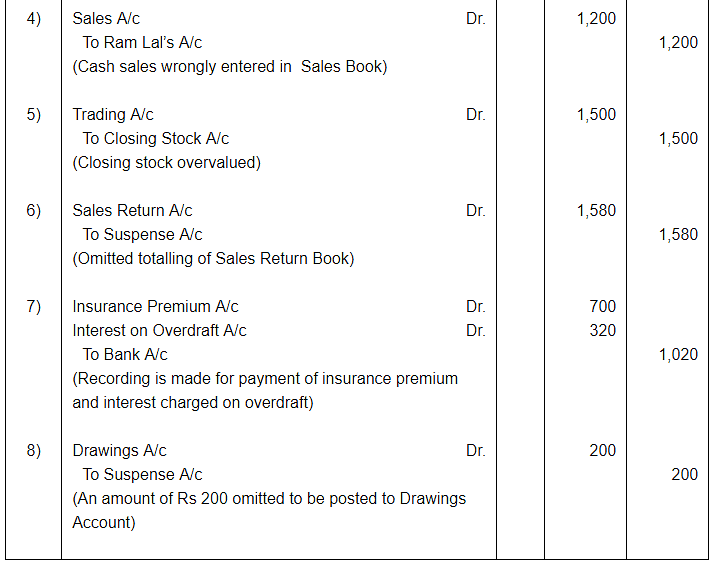