Page No 19.48:Question 31:Give rectifying journal entries for the following errors:(a) Sale of goods to Madan ₹ 6,000 were entered in the sales book as ₹ 600.(b) A credit purchase of ₹ 1,500 from Ajay has been wrongly passed through the sales book.(c) Repairs to building ₹ 300 were debited to building account.(d) ₹ 2,050 paid to Rohit is posted to the debit of Mohit's account as ₹ 5,020.(e) Purchase return book is overcast by ₹ 400.ANSWER:One Sided Errors 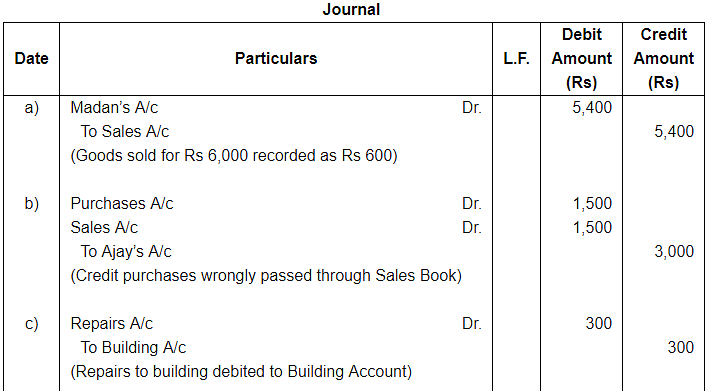 Question 32:Rectify the following errors:(i) The Sales Book has been totalled ₹ 1,000 short.(ii) Goods worth ₹ 1,500 returned by Green and Co. have not been recorded anywhere.(iii) Goods purchased worth ₹ 2,500 have been posted to the debit of the supplier, Gupta and Co.(iv) Furniture purchased from Gulab and Co. worth ₹ 10,000 has been entered in Purchases Day Book.(v) Cash received from A ₹ 2,500 has not been posted in his account.ANSWER:
One Sided Errors

Question 33:Rectify the following errors by means of Journal entries:(i) A cheque of ₹ 5,000 received from Ashish was dishonoured and was debited to Discount Account.(ii) Purchase of ₹ 540 from Ramneek was written in Sales day book, but was correctly posted to correct side of Ramneek’s Account.(iii) Salary paid to Miss Yugakshi ₹ 1,000 was debited to her personal account as ₹ 900.(iv) Furniture costing ₹ 500, purchased from Jyoti, was wrongly entered in Purchase book as ₹ 450.ANSWER:One Sided Errors 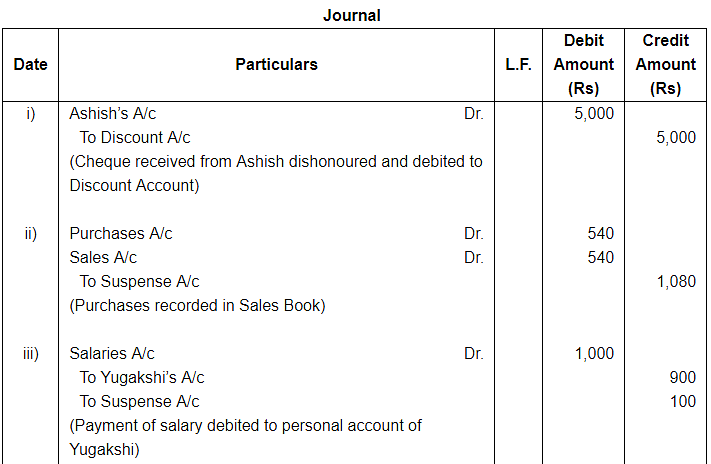 Question 34:During the course of an accounting year, the accountant prepared a trial balance which did not tally. He put the difference in a suspense account. Subsequently, he located the following errors in his books of account:(i) The total of the returns outwards book, ₹ 21,500 has not been posted.(ii) A sale of ₹ 4,300 to Ramesh has been credited to him as ₹ 3,400.(iii) A sale of ₹ 2,960 to Shyam has been recorded in sales book as ₹ 2,690.(iv) Old furniture sold for cash worth ₹ 5,400 has been posted in sales account as ₹ 4,500. There was no profit or loss on sale.(v) Goods taken by proprietor worth ₹ 1,000 have not been recorded in the books of account at all.Pass journal entries of rectify the above mentioned errors and prepare suspense account assuming no error has remained undetected.ANSWER:One Sided Errors 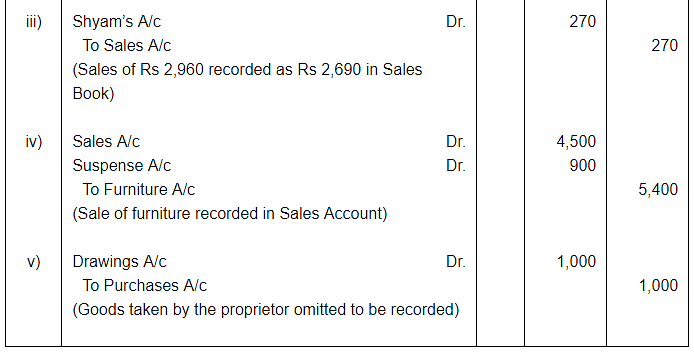 Page No 19.49:Question 35:During the course of an accounting year, an Accountant found a difference in the tiral balance. He puts this difference in a newly opened suspense account. Subsequently, he located the following errors in his books of account:(i) Goods purchased from Shiv for ₹ 10,000, but entered in sales book.(ii) Received a bill receivable for ₹ 18,000 from Ganesh, but recorded in bills payable book.(iii) An item of ₹ 4,000 in respect of purchases returns, wrongly debited to purchases account.(iv) An item of ₹ 2,000 relating to pre-paid salary account omitted to be brought forward.(v) Paid ₹ 1,000 on account of repair of furniture, but wrongly debited to furniture account.Pass journal entries to rectify the above mentioned errors and prepare suspense account assuming that no error remained undetected.ANSWER:One Sided Errors 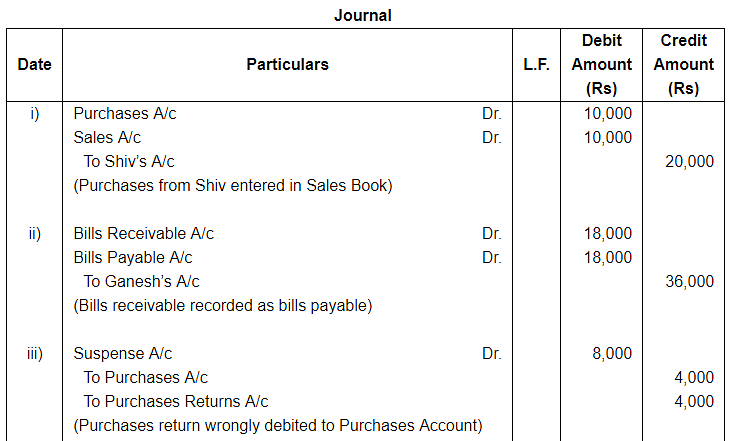 Question 36:Pass journal entries to rectify the following errors. The trial balance had ₹ 1,260 excess credit. The difference has been posted to a suspense account:(i) The total of returns inwards book has been cast ₹ 2,000 short.(ii) The purchase of an office table costing ₹ 6,000 has been passed through the purchases day book.(iii) A sum of ₹ 7,500 paid to workman for wages for making showcases has been charged to wages account.(iv) A purchase of ₹ 1,340 has been posted to the creditor's account as ₹ 600.(v) A cheque of ₹ 4,000 received from Y has been dishonoured; it has been posted to the debit of allowances account.After passing journal entries, prepare the suspense account.ANSWER:One Sided Errors 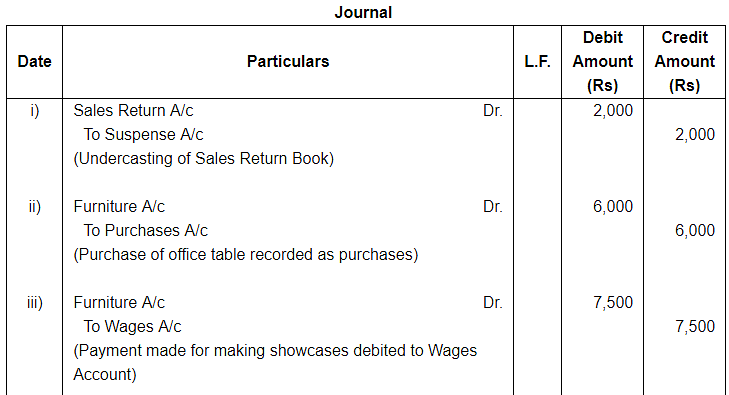 Page No 19.50:Question 37:The books of Ramesh did not agree. The difference of ₹ 12,700 in trial balance was placed to the debit of suspense account. Subsequently, the following errors were located. Pass journal entries to rectify the errors and prepare the suspense account:(i) The total of the purchases returns book, ₹ 2,100 has not been posted.(ii) A sale of ₹ 4,300 to Ram has been credited to his account as ₹ 3,400.(iii) A purchase from Suresh for ₹ 4,000 has been entered in the sales book. However, Suresh has been correctly credited with ₹ 4,000.(iv) Old furniture sold on credit for ₹ 5,400 has been recorded in the sales account as ₹ 4,500.(v) Goods taken away by Ramesh, the proprietor for his personal use worth ₹ 750 has not been recorded in the books of accounts at all.ANSWER:One Sided Errors

Question 38:Rectify the following errors by passing Journal entries:(i) Old furniture sold for ₹ 500 has been credited to Sales Account.(ii) Machinery purchased on credit from Raman for ₹ 2,000 recorded through Purchases Book as ₹ 16,000.(iii) Cash received from Rajat ₹ 5,000 was posted to the debit of Bhagat as ₹ 6,000.(iv) Depreciation provided on machinery ₹ 3,000 was posted to Machinery Account as ₹ 300.ANSWER:One Sided Errors

Question 39:Pass Journal entries of rectify the following errors which were located after preparing the Trial Balance:(a) The Sales Book was overcast by ₹ 500.(b) Credit purchases from Aradhya ₹ 6,000 were posted to the debit of her account as ₹ 9,000.(c) Goods returned from Ayan ₹ 8,000 were recorded in Purchases Return Book.(d) Wages paid ₹ 3,980 were recorded in the Cash Book as ₹ 3,890.ANSWER:One Sided Errors 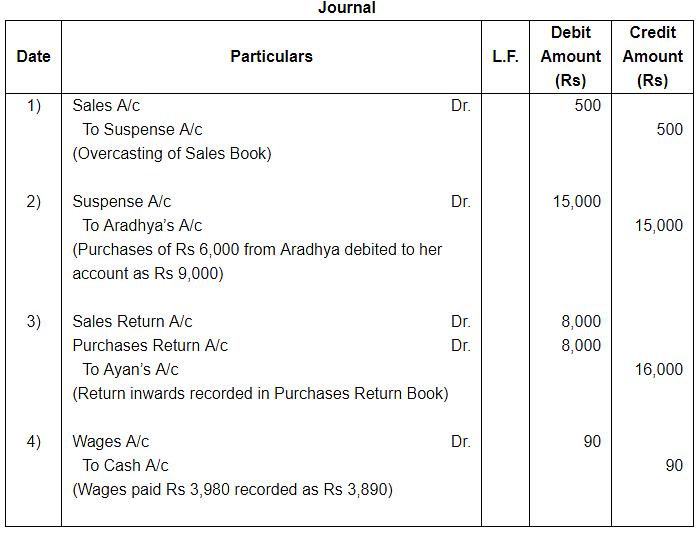 Question 40:Rectify the following errors:-(a) ₹ 500 paid for the purchases of Radio set for the proprietor debited to General expenses account.(b) Goods sold to Ram for ₹ 300 have been entered in the purchase book. However the account of Ram stands correctly posted.(c) An amount of ₹ 50 paid to Kewal has been credited to the account of Kanwal.(d) A sum of ₹ 450 paid as rent has been debited to Landlord's personal account.(e) Wages paid for the month ₹ 300 was posted twice.(f) Sales return book was undercast by ₹ 10.(g) Goods for ₹ 100 have been returned by a customer. These have been taken into stock but no entry in respect thereof has been made in the books.(h) Repairs ₹ 500 debited to machinery account as ₹ 550.ANSWER:One Sided Errors 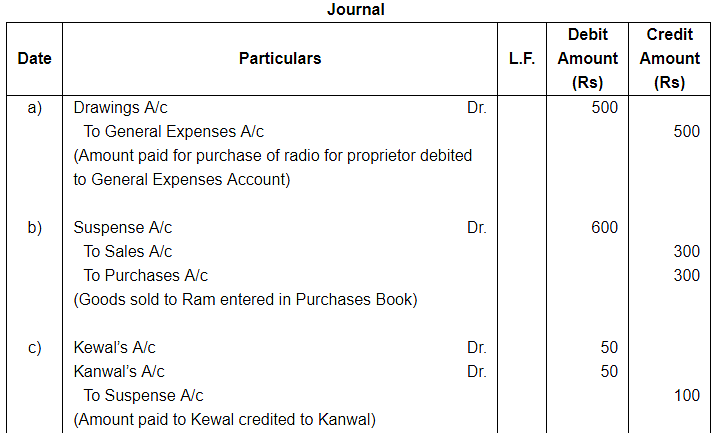 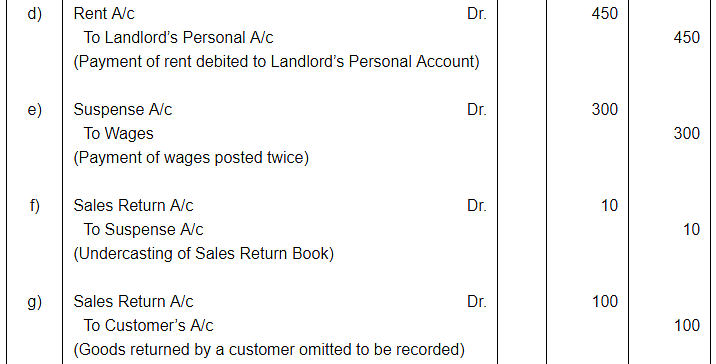 Page No 19.51:Question 41:Pass journal entries to rectify the following errors detected during preparation of Trial Balance:(i) Purchases book is undercast by ₹ 1,000.(ii) Wages paid for construction of office debited to wages account ₹ 20,000.(iii) A credit sale of goods ₹ 1,200 to Ramesh has been wrongly passed through the purchase book.(iv) Goods purchased for ₹ 5,000 were posted as ₹ 500 to the purchases account.(v) An amount of ₹ 2,000 due from Mahesh Chand, which had been written off as a bad debt in a previous year was unexpectedly recovered and has been posted to the personal account of Mahesh Chand.(vi) A credit purchase of ₹ 1,040 from Ramesh was passed in the books as ₹ 1,400.(vii) Goods (Cost ₹ 5,000; Sales Price ₹ 6,000) distributed as free samples among prospective customers was not recorded anywhere.(viii) Goods worth ₹ 1,500 returned by Green and Co. have not been recorded anywhere.ANSWER:One Sided Errors 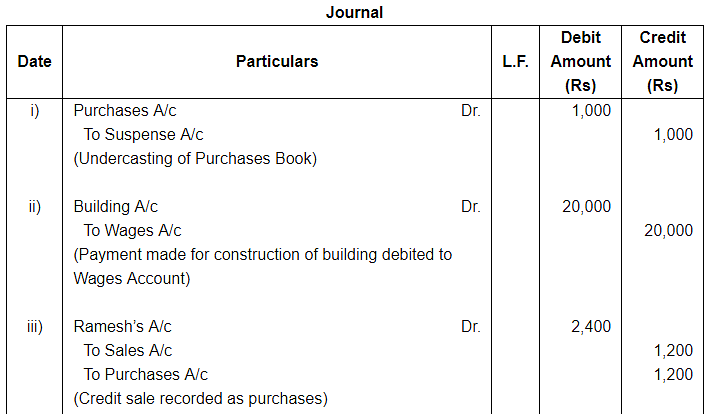 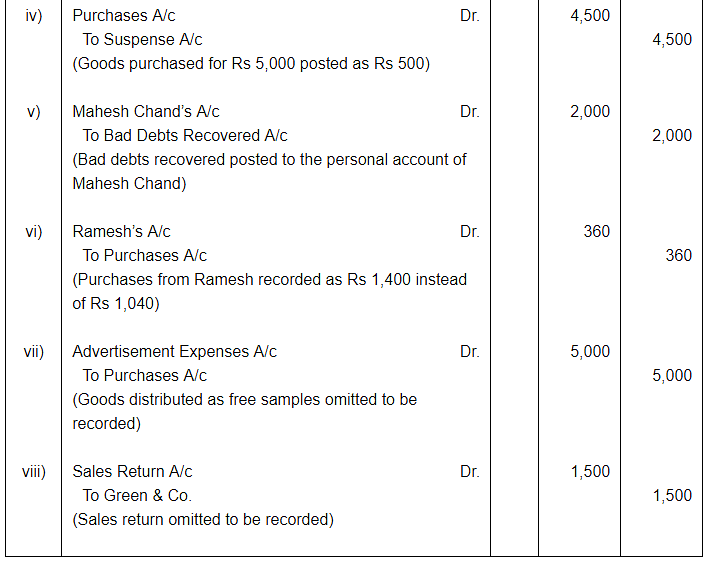 Question 42:Rectify the following errors found in the books of Mr. Suhail by passing entries:(i) One item of purchase of ₹ 250 has been posted from the purchases book to the ledger as ₹ 350.(ii) Sales return of ₹ 2,000 from a party has not been posted to that account, through the party's account has been credited.(iii) A cheque of ₹ 600 issued to the suppliers account (shown under Sundry Creditors) toward his dues had been wrongly debited to the purchases account.(iv) Credit sale of ₹ 1,000 has been credited to the sales and also to the Sundry Debtor's Account.ANSWER: 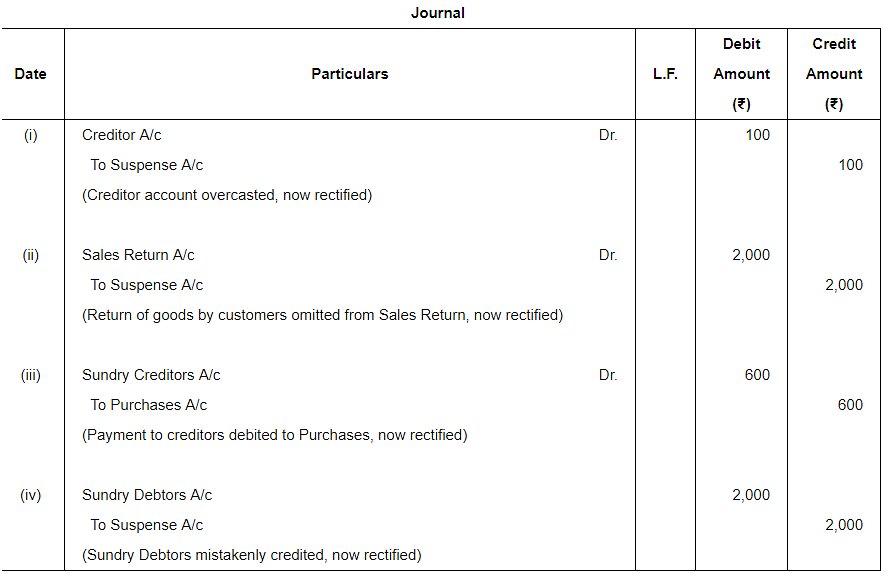 Page No 19.52:Question 43:Rectify the following errors:(a) Bought Radio for ₹ 1,000 for the proprietor was debited to General Expenses A/c.(b) Bought goods from Mohan ₹ 2,000 was passed through the Sales Book, however, the account of Mohan was credited correctly.(c) Wages due ₹ 1,500 has not been taken into account.(d) Goods Returned by Kamal ₹ 240 has been debited to his account ₹ 420.ANSWER: