Question 30: Rectify the following errors:(i) Wages paid for the construction of office debited to the Wages Account, ₹ 5,000.(ii) Machinery purchased for ₹ 35,000 was passed through the Purchases Book.(iii) Old furniture sold for ₹ 1,000, passed through the Sales Book.(iv) ₹ 2,000 paid to Mehta Bros. against acceptance were debited to Malhotra Bros. Account.(v) Sales of ₹ 204 to Ram debited to his account as ₹ 402 and purchases of ₹ 1,012 from Shyam credited to his account as ₹ 1,210.ANSWER: 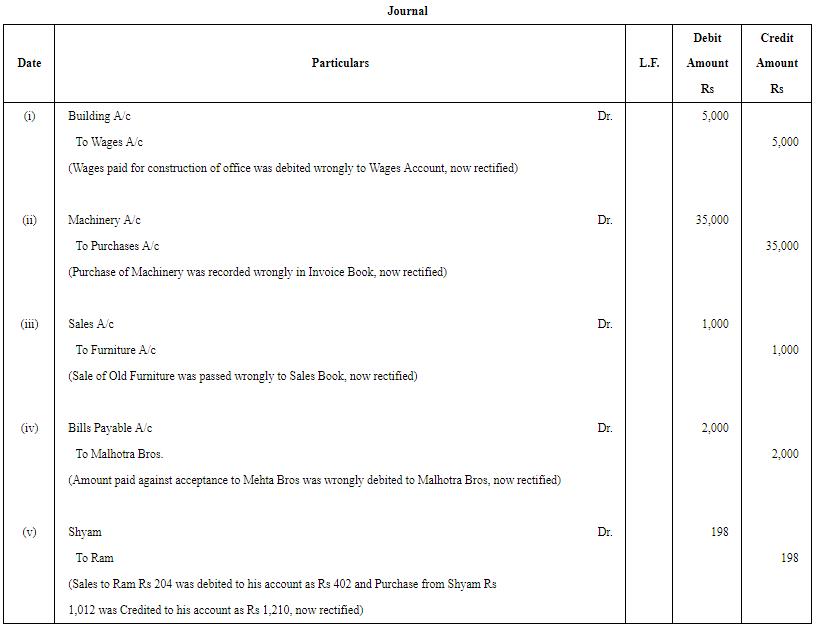 Question 31: Pass the rectification entries for the following transactions:

(ii) The balance in the account of Rahim ₹ 1,000 had been written off as bad but no other account has been debited.

(iii) An addition in the Returns Inward Book had been cast ₹ 100 short.

(iv) A cheque for ₹ 200 drawn for the Petty Cash Account has been posted in the account of Asif.

(v) A discounted Bill of Exchange for ₹ 20,000 returned by the firm's bank had been credited to the Bank Account and debited to Bills Receivable Account. A cheque was received later from the customer for ₹ 20,000 and duly paid.

(vi) Ramesh's Account was credited with ₹ 840 twice instead of once. 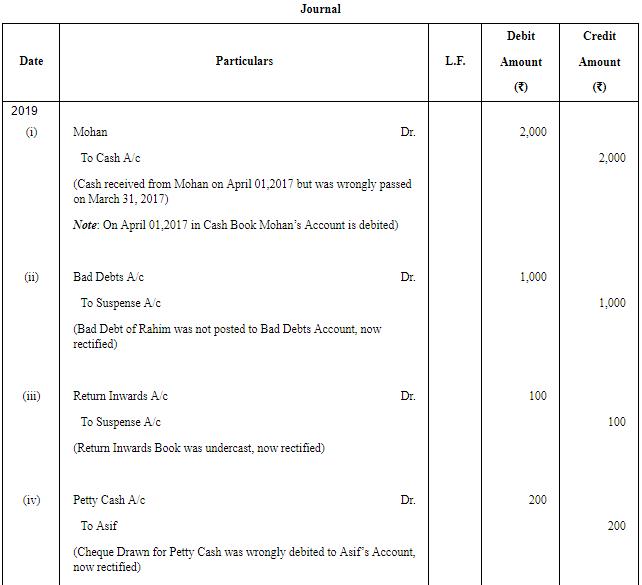 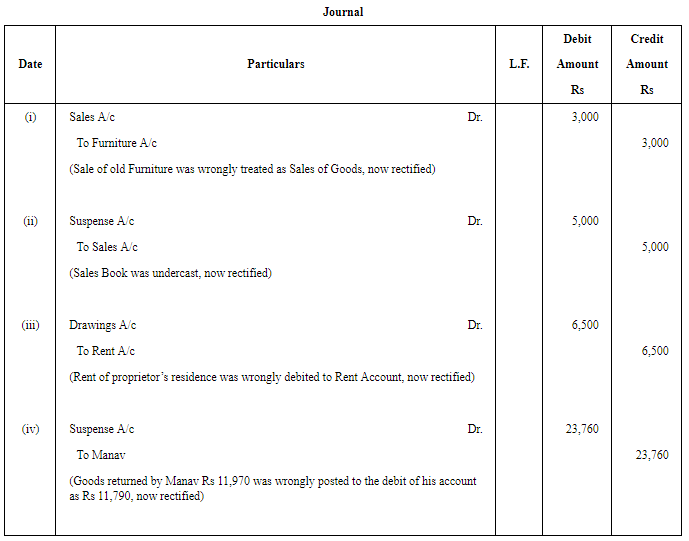 Question 33: There was a difference in the Trial Balance of M/s. Jain & Sons, prepared for the year ended 31st March, 2009. The accountant put the difference in Suspense Account.
The following errors were found:
(i) Purchases Return Book total ₹ 400 has not been posted to Ledger Account.
(ii) ₹ 5,100 spent on legal expense for the newly acquired Building was debited to the Building Account as ₹ 1,500.
(iii) A sale of ₹ 6,540 to Rajat has been credited to his account.

Rectify the errors and show the Suspense Account with Nil closing balance. 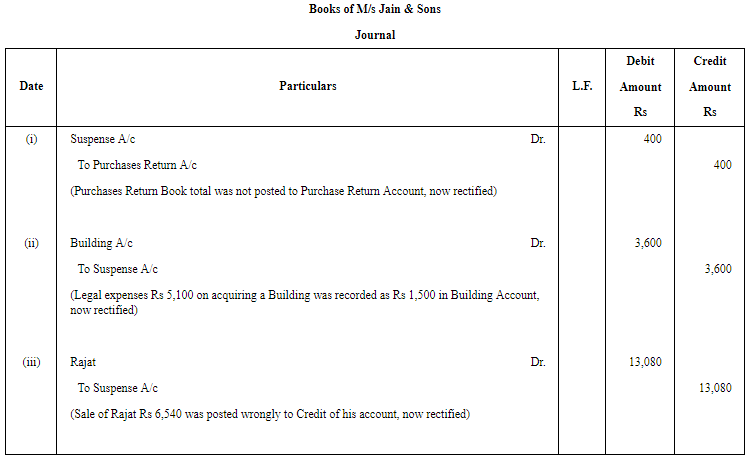 Question 34: Give the Journal entries to rectify the following errors:

(i) Purchases Book was overcast by ₹ 1,000.
(ii) Installation charges on new machinery purchased ₹ 500 were debited to Sundry Expenses Account as ₹ 50.
(iii) Radhey Shyam returned goods worth ₹ 500 which was entered in the Purchases Return Book.
(iv) Goods taken by the proprietor for ₹ 5,000 have not been entered in the books at all.
ANSWER: 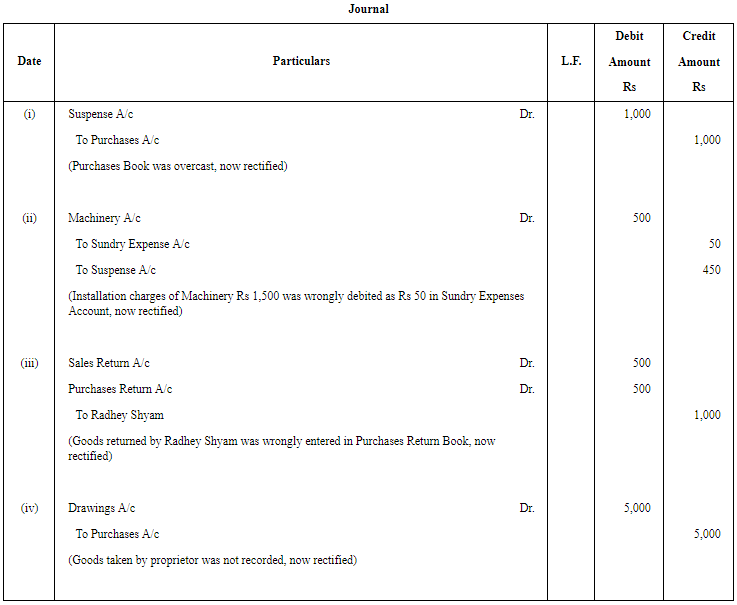 (i) The total of one page of Sales Book was carried forward as ₹ 371 instead of ₹ 317.
(ii) ₹ 540 received from Yatin was posted to the debit of his Account.
(iii) Purchases Returns Book was overcast by ₹ 300.
(iv) An item of ₹ 1,062 entered in Sales Return Book had been posted to the debit of customer who returned the goods.
(v) ₹ 1,500 paid for furniture purchased had been charged to ordinary Purchase Account. 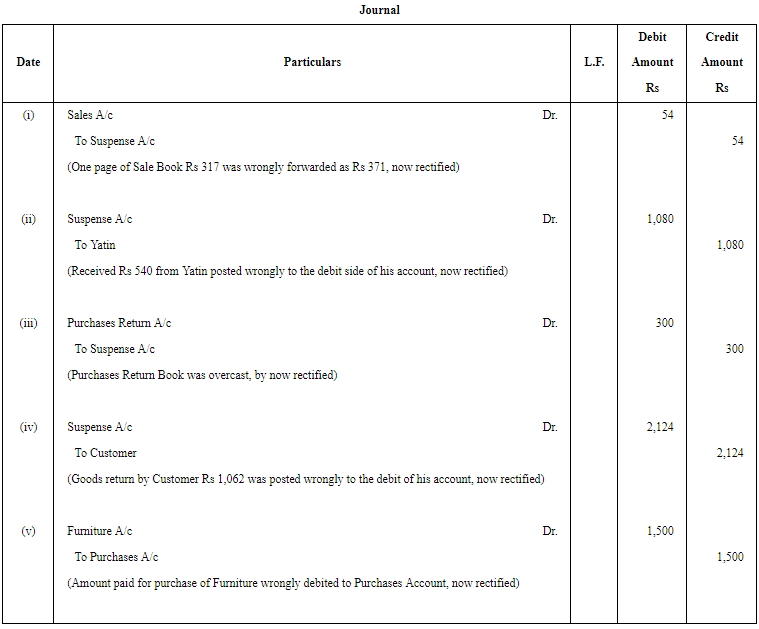