Question 36: Rectify the following errors by passing Journal entries:(i) Old furniture sold for ₹ 500 has been credited to Sales Account.(ii) Machinery purchased on credit from Raman for ₹ 2,000 recorded throughPurchases Book as ₹ 16,000.(iii) Cash received from Rajat ₹ 5,000 was posted to the debit of Bhagat as ₹ 6,000.(iv) Depreciation provided on machinery ₹ 3,000 was posted to Machinery Account as ₹ 300.ANSWER: 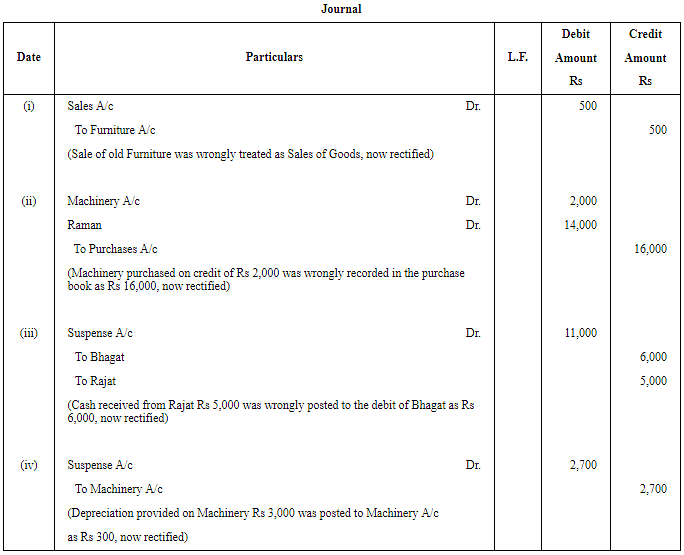 Question 37: Rectify the following errors by passing Journal entries:(i) A sum of ₹ 470 received from Ganga was posted to her debit as ₹ 740.(ii) A debit balance of ₹ 550 in the personal account of Mr. John was undercast.(iii) Bills Receivable from Brown for ₹ 3,000 posted to the credit of Bills Payable Account and credited to Brown’s Account.(iv) Goods returned by Mridul ₹ 225 have been entered in the Returns Outward Book.ANSWER: 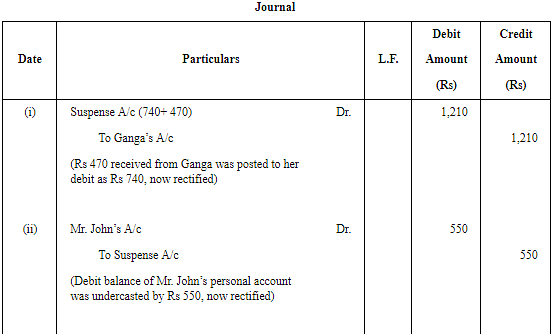 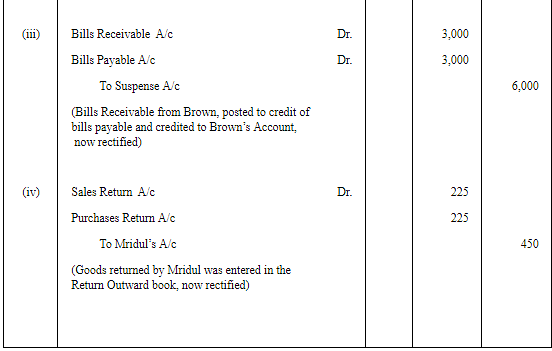 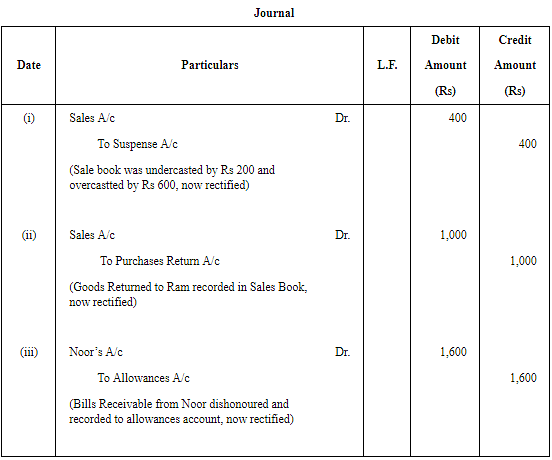 Question 39: Pass the rectification entries for the following transactions:(i) Repairs to plant amounting to ₹ 2,000 had been charged to Plant and Machinery Account.(ii) Wages paid to the firm's workmen for making certain additions to machinery amounting to ₹ 1,340 were debited to Wages Account.(iii) A cheque for ₹ 7,500 received from Sandesh was credited to the account of Ramesh.(iv) Goods to the value of ₹ 7,000 returned by Prateek were included in closing stock, but no entry was made in the books.(v) Goods costing ₹ 5,000 were purchased for various members of the staff and the cost was included in 'Purchases'. A similar amount was deducted from the salaries of the staff members concerned and the net payments to them debited to Salaries Account.(vi) Credit purchase of old machinery from Sohan for ₹ 1,70,000 was entered in the Purchase Book as purchase from Mohan for ₹ 7,10,000. ₹ 30,000 paid as repairing charges on the reconditioning of a newly purchased second hand machinery were debited to General Expenses Account.(vii) Debit and Credit totals of discount columns in the Cash Book which come to ₹ 400 and ₹ 370 respectively have not been posted to Discount Accounts.ANSWER: 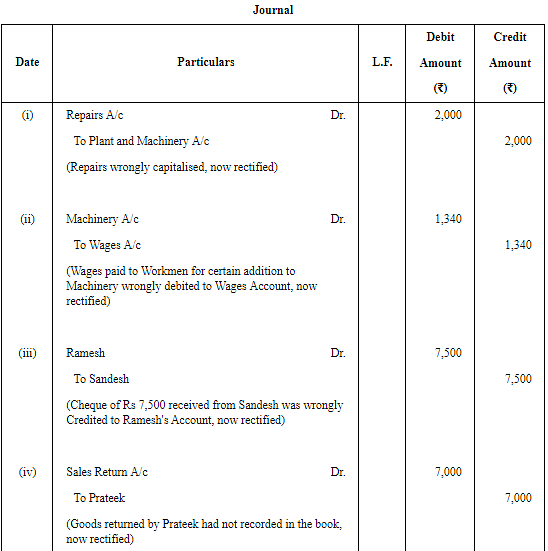 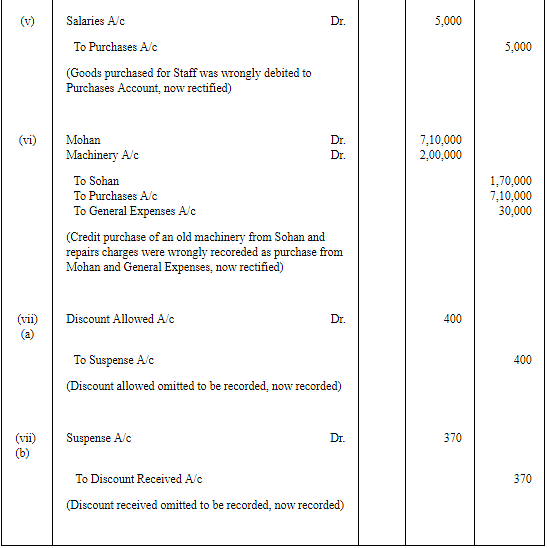 Question 40: A Trial Balance disclosed a difference of ₹ 417 placed on the credit side of the Suspense Account. Later on the following errors were located:(i) Goods worth ₹ 200 purchased from Sohan had been posted to his account as ₹ 250.(ii) A purchase of furniture for ₹ 500 was recorded in the Purchases Book.(iii) Instead of crediting Gian’s Account with ₹ 512, it was debited with ₹ 215.(iv) Goods worth ₹ 130 returned by Gian were entered in the Sales Book and posted therefrom to the credit of Gian’s Personal Account.Pass the rectifying entries and prepare a Suspense Account.ANSWER: 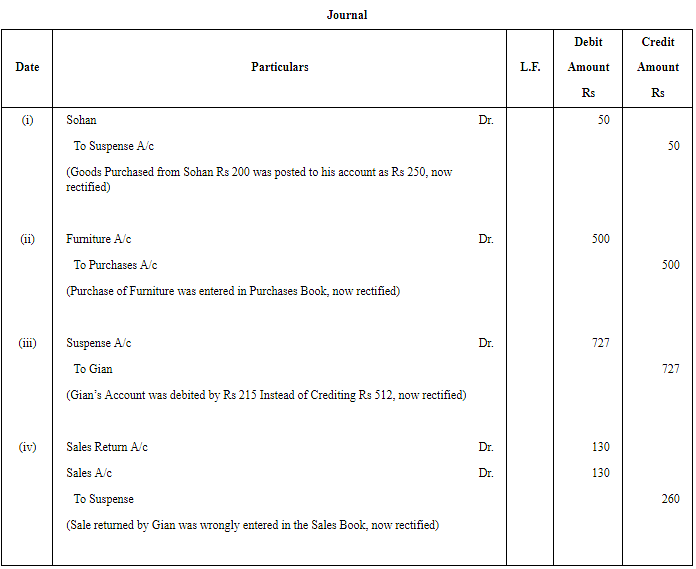 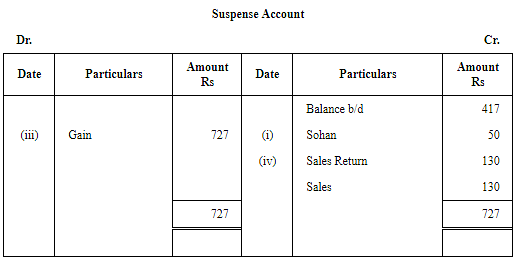 Question 41: There was a difference of ₹ 720 in the Trial Balance which has been transferred to the credit side of the Suspense Account. Pass the rectifying entries and prepare a Suspense Account to rectify the following errors:(i) An amount of ₹ 375 now posted on the debit side of the Commission Account instead of ₹ 275.(ii) Credit amount of ₹ 260 posted to the debit of the Personal Account as ₹ 360.(iii) Goods sold to Surinder recorded in Purchases Book ₹ 300.(iv) D’s bill for erection of godown at a cost of ₹ 1,200 has been charged to the Repairs Account.ANSWER: 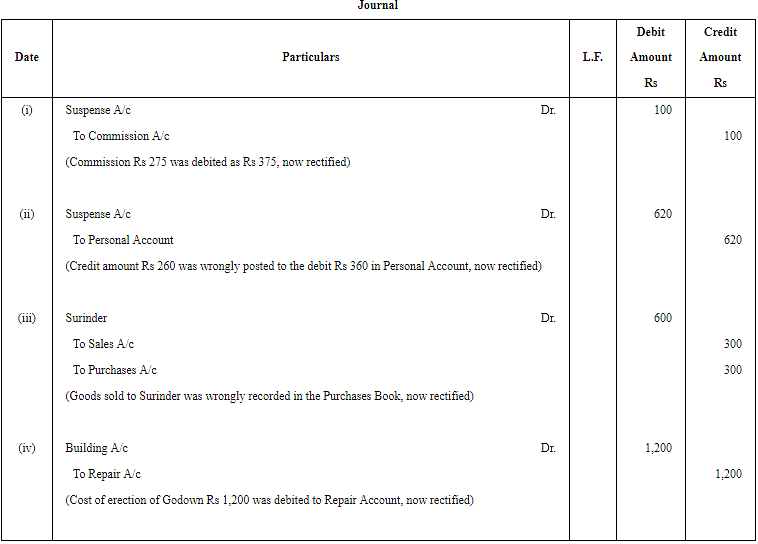