Biological or enzyme mediated oxidation of organic compounds is called respiration. Carbohydrates, amino acids or fatty acids all may take part in this oxidation individually. Whatever the substrate of oxidation is, the product in every case is Carbon dioxide and water and energy. A part of this energy comes out as heat and the rest is stored within the biological system (i.e., in the cell of the organism) in form of ATP (high energy molecules). The overall equation for respiration as 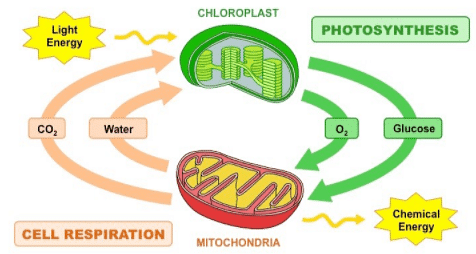 Fig: RespirationThis equation shows the complete oxidation of glucose. But sometimes incomplete oxidation also takes place in the absence of Oxygen and this case products are Carbon dioxide and ethanol (or lactic acid)

Growth is a permanent increase in volume and weight and is a resultant effect of both anabolic and catabolic processe. Besides factors like water, light, CO2 and O2 concentrations, one more factor exist, which help the process of growth, is Hormones. Hormones can be defined as organic substances produced by the organism in a very small quantity and carried from one place to the other where it has got a profound action on metabolism. 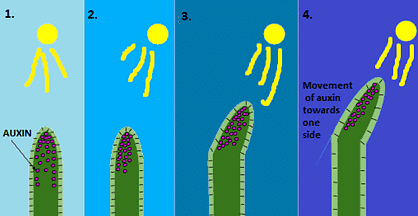 Fig: Growth and Movement of plants

Different types of hormones found in plants are:

(i) Discovered first in the rice fields of Japan where the abnormal length of the rice plants (called Baeanae disease) was caused by the attack of a fungi-Gibberella fuzikuroi. Ultimately from this fungi gibberelline was isolated.

(ii) Chemically it is Gibberellic Acid (GA) on the basis of molecular structure 15 types of gibberellic acids can be distinguished denoted as GA1 to GA15.

(iii) Functions are: (a) It helps in the elongation (as auxins), (b) helps flowering, (c) breaking of dormancy of the seed.

Abscissin: (or Abscissic Acid) helps in the formation of abscissin layer at leaf base essential for the natural fall of the leaves. Movements in plant can be divided into 3 broad groups:

Taxic: Change of place (Particularly for unicellular forms or organs)

Some cereals have two kinds of physiological strains the winter type and the spring type. The method of inducing winter strains of cereals to flower early by a pre-treatment of seeds with a certain temperature differing in different groups of plants was developed in Russia by Lysenko (1932), and is known as Vernalization. Vernalization or early flowering is achieved by giving low temperature (chilling) treatments to seeds. Thus vernalization is “a treatment given to seeds before sowing, to hasten the time of flowing of plants that will develop from them.” Practical benefits derived from this method are to induce earlier flowering and earlier maturing of the crop, to escape drought, flood and forst. 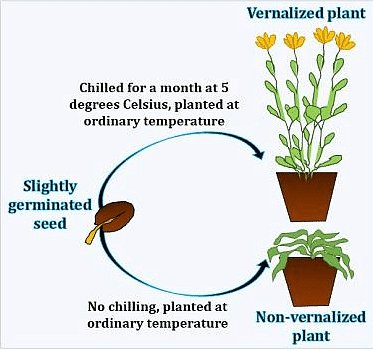 On the basis of photoperiod requirement plants have been classified as follows:

Photoperiodism has helped in the control of flowering of a large number of horticultural and agricultural plants. Artificial shortening or lengthening of day-length by electric illumination has induced plants to flower earlier than the normal plants.

A population of genetically identical plants derived from an individual by vegetative means is called a clone. Some important methods of artificial vegetative propagation are as follows:

The use of any plant part such as stem, leaf or root for vegetative propagation is called cutting. For example, stem-cuttings are used for the propagation of sugarcane, bougainvillea, roses and cocoa. Leaf cuttings are used for the propagation of Begonia and rootstocks are used for the propagation of banana. If a cutting fails to develop roots easily, it can be facilitated by auxin treatment at the cut end. For vegetative propagation by cuttings, the factors taken into consideration are, optimal length and covered with moist soil until the branch produces adventitious roots. The rooted branch is then removed from the parent plant for propagation. In trench layering, a branch is immersed horizontally in soil until it produces several roots and shootbuds. Then each shoot bud with its roots is detached and grown as independent plant. In air layering, the stem is girdled i.e. its bark is removed or a slit is made in the branch. The cut surface is treated with auxin and covered with moist cotton or sphagnum moss and wrapped with polythene sheet. When roots appear, the branch is cut below the level of roots and planted in soil.

It is practised in such plants which do not root readily or produce weak root system. It is the art of joining parts of two plants which then grow as one individual. This is successful only in the dicot plants which have cambium for secondary growth. The rooted part, called a stock, is derived from a plant resistant to diseases and pests having efficient absorption of water and minerals. 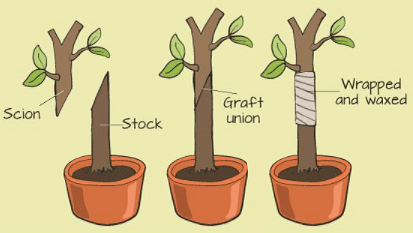 Fig: GraftingThe upper portion to be grafted to the stock is called a scion and it is derived from a plant having superior characters.During grafting, the graft union should heal properly and the cambia of the stock and scion should have the same growth rate. Grafting is practised for propagation of mango, apple, pear, citrus and guava.

It is a special type of grafting in which a single bud with adjacent bark is used as a scion and it is inserted into a cut made in the stock under the bark.

The cells, tissues or organs are detached from a plant to be propagated, and grown on a suitable artificial medium. In vitro (in test tube), these explants develop to form callus which is defined as nonpathological undifferentiated tissue involving uncontrolled cell divisions. The callus can be differentiated to produce platelets by supplementing the medium with hormones such as auxin, gibb-erellin and cytokinin. This technique has been commercially used for the propaga-tion of orchids, carna-tion, gladiolu, and Chrysanthemum. The advantage of micro-culture technique is that we can get virus free clones by raising callus from shoot apex; and unlimited number of plants can be obtained within a limited space and relatively short time. 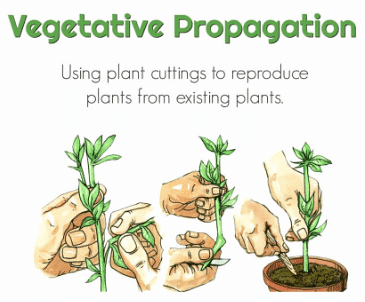 The plants which have lost their capacity to reproduce sexually, can be multiplied easily, e.g. roses, seedless grapes, bougainvillea and lawn grass. It can be of great use in plants where seeds have a long dormancy or poor viability e.g. in Theo-broma cacao, leaves are used for raising new plants. The heteroz-ygous plants having desirable characters can be multiplied without losing the hereditary potentialities of their parent plant. Grafting is significant because it aids in getting an economic plant having useful characters of two different individuals in a short time.