The document Rest and Motion: Kinematics JEE Notes | EduRev is a part of the JEE Course HC Verma and Irodov Solutions.
All you need of JEE at this link: JEE

Page No. 48Ques 1: Galileo was punished by the Church for teaching that the sun is stationary and the earth moves around it. His opponents held the view that the earth is stationary and the sun moves around it. If the absolute motion has no meaning, are the two viewpoints not equally correct or equally wrong?Ans: The absolute motion has no meaning. In the relative motion view, the two viewpoints are the same. Hence, both viewpoints are equally correct or equally wrong. Ques 2: When a particle moves with constant velocity, its average velocity, its instantaneous velocity and its speed are all equal. Comment on this statement. Ans: Constant velocity means that a particle has the same direction and speed at every point. So, its average velocity and instantaneous velocity are equal. Its speed being a scalar quantity is equal in magnitude only.Ques 3: A car travels at a speed of 60 km/hr due north and the other at a speed of 60 km/hr due east. Are the velocities equal? If no, which one is greater? If you find any of the questions irrelevant, explain.Ans: No, as the directions of the cars are different, their velocities are not equal, as velocity is a vector quantity.We cannot compare velocities on the basis of direction only, so the question is irrelevant.Ques 4: A ball is thrown vertically upward with a speed of 20 m/s. Draw a graph showing the velocity of the ball as a function of time as it goes up and then comes back.Ans: 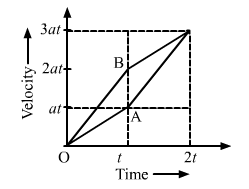 From the velocity–time graph, we have:
Distance covered by