The document Revision Notes - Complex Numbers Mathematics Notes | EduRev is a part of the Mathematics Course Algebra for IIT JAM Mathematics.
All you need of Mathematics at this link: Mathematics

Complex Numbers are the numbers which along with the real part also has the imaginary part included with it. That means complex numbers contains two different information included in it.It is defined as the combination of real part and imaginary part. Either of the part can be zero.

If ‘a’ is the real part and ‘b’ represents imaginary part, then complex number is represented as z = a + ib where i, stands for iota which itself is a square root of negative unity. Thus, we can also write z = Re(z) + i Im(z). This form of representation is also called as the Cartesian or algebraic Keep Calm and Love Complex Numberform of representation.If z = -2 + j4, then Re(z) = -2 and Im(z) = 4.Similarly, for z = 3+j5, Re(z) = 3 and Im(z) = (5).Complex Number can be considered as the super-set of all the other different types of number. The set of all the complex numbers are generally represented by ‘C’.Complex Numbers extends the concept of one dimensional real numbers to the two dimensional complex numbers in which two dimensions comes from real part and the imaginary part.

Few Examples of Complex Number:2+i3,-5+6i,23i,(2-3i),(12-i1),3i are some of the examples of complex numbers. All the examples listed here are in Cartesian form. There are also different ways of representation for the complex number, which we shall learn in the next section.

Representation of Complex NumberComplex Number itself has many ways in which it can be expressed. Some of the most commonly used forms are:• Cartesian or algebraic or rectangular form• Trigonometric or polar form• Exponential form• Vector form 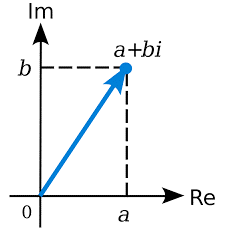 How do we locate any Complex Number on the plane?  Let us take few examples to understand that, how can we locate any point on complex or argand plane?

Example 1:
Consider a complex number z = 6 +j4 (‘i’ and ‘j’, both can be used for representing imaginary part), if we compare this number with z = a + jb form. Then we can easily equate the two and get a = 6 and b = 4. Since both a and b are positive, which means number will be lying in the first quadrant. ‘z’ will be 6 units in the right and 4 units upwards from the origin. You can see the same point in the figure below.

Example 3:
Now let’s consider a point in the third quadrant as z = -2 – j3. Since in third quadrant both a and b are negative and thus a = -2 and b = -3 in our example. This point will be lying 2 units in the left and 3 units downwards from the origin. 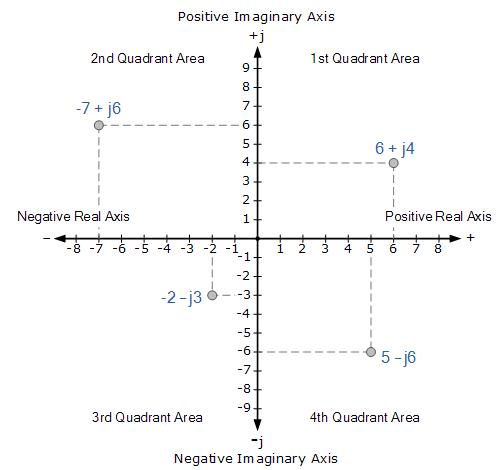 Are all Real Numbers are Complex Numbers?
Complex number has two parts, real part and the imaginary part.that is. z = a + ibif b = 0, z = a which is called as the Purely Real Numberand if a = 0, z = ib which is called as the Purely Imaginary Number.Thus we can say that all real numbers are also complex number with imaginary part zero.

What is the application of Complex Numbers?
Complex Numbers have wide verity of applications in a variety of scientific and related areas such as electromagnetism, fluid dynamics, quantum mechanics, vibration analysis, cartography and control theory.Let us have a look at the types of questions asked in the exam from this topic:Illustration 1: Let a and b be roots of the equation x2 + x + 1 = 0. Then find the equation whose roots are a19 and b7.Solution: Given that x2+x+1=0.This means that either x =ω or x=ω2.Hence, a19= ω19and b7 = ω14=ω2Hence, the equation becomes x2–(ω+ω2)x + ωω2=0.Hence the required equation is x2+x+1=0.