The document Revision Notes - Confrontation of Cultures Humanities/Arts Notes | EduRev is a part of the UPSC Course History Class 11.
All you need of UPSC at this link: UPSC

It reflects the encounters between European and the people of the America between 15th and 17th Centuries. 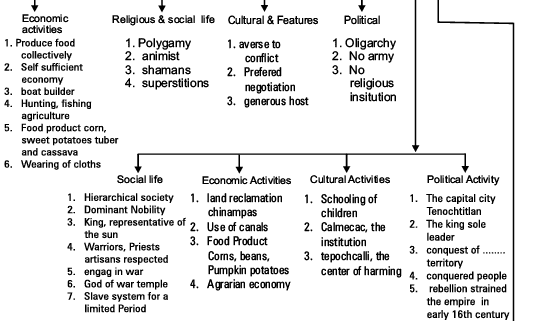 i) Military strength of Spainii) Use of gun powder and Horsesiii) Local people forced to pay tribute or to work in gold and silver mines.iv) Local chieftains were forced to explore new lands and sources ofgold.v) By Military repression, forced labour and diseases like small pox.

i) Cortez be friended Totonacs, a dissent group of Aztecsii) Montezuma, the Aztec king afraid of gun powder and horses thought Cortes to be the incarnation of exile god to take the revenge, in) Tenochtitlan, thecapitalsubdued on 8 Nov.1519iv) Cortes installed Christian images in the templev) Incessant demands for gold by Spanish provoked uprising.vi) Mysterious death of Montezuma, led to suspicion and deadly small pox, Elected king cuatemoc chose to give up his life.vii) Cortes became Captain General of new spain in Mexico.

i) Brazil was discovered by Cabaral in 1500ii) The king of Portugal divided the coast of Brazil in 14 hereditary captaincies.iii) Portuguse were given the right to land ownership and right to enslave local peopleiv) Production of sugar and sugarcane plantation with the use of slave labour.v) Jesuits work led to acceptance of Christianity and strong denial of slavery.