THERMIONIC EMISSIONThermionic emission is the phenomenon in which electrons are emitted by a metal contains free electrons which behave like the molecules of a perfect gas.RICHARDSON EQUATIONI = AT1/2e-b/THere I is the thermionic current density in amp per sq meter. T is the temperature on kelvin scale, A and b being constants.A = ne√k/2πm, b = e?/kHere, n is the number of electrons per unit volume, e is the charge on electron, m is the mass of electron, k is the Boltzmann’s constant and ? is the potential barrier of the metal. 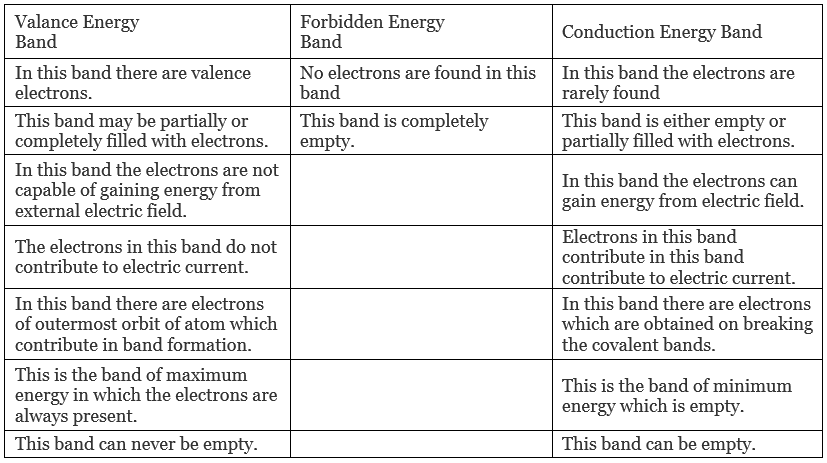 Various types of solidsOn the basis of band structure of crystals, solids are divided in three categories.(a) Insulators(b) Semi-conductors(c) Conductors.

Difference between Intrinsic and Extrinsic semiconductors

Work function: Work function of a metal is the amount of energy required to pull an electron from the surface of metal to a distant position.

Diode: It is a vacuum tube containing two electrodes, an emitter and a collector.

Full-wave rectifier: A rectifier in which current flows through the load for both the halves of input a.c. is called half-wave rectifier.TRIODEIt is a vacuum tube containing three elements namely plate, filament and grid.

Triode constants(a) Plate resistance (rp): It is defined as the ratio between changes in plate potential keeping grid potential constant to the corresponding change in plate current.

(b) Mutual Inductance (gm): (Trans-conductance):- It is defined as the ratio between change in plate current  to the change in grid potential keeping plate potential constant required to bring about that change in current.

Triode as an amplifier: Process of increasing the amplitude of the input signal is called amplification. A triode affecting an increase in the amplitude of a signal is said to be acting as an amplifier.Voltage gainIt is the ratio between the output voltage (voltage across the load resistance RL) to the signal voltage.Voltage gain = V0/eg = μRL/RL+rp = μ/[1+(rp/RL)]This indicates that the voltage gain depend upon the load resistance. For RL=∞, voltage gain is equal to the amplification factor.(a) Ip = (μVg/RL+rp)(b) A =μRL/RL+rp(c) Amax = μ(d) μ = A [1+(rp/RL)](e) A = μ/2   if RL = rp

Triode as an oscillator:- A triode producing high frequency oscillating waves, of constant amplitude, is said to be acting as an oscillator.Frequency of oscillation waves (f):- f = 1/2π√LCHere L is the inductance and C is the capacitance.