Thus matter is classified mainly into three categories depending upon its physical state namely solid, liquid and gaseous states. 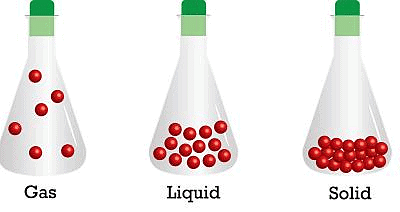 DISTINCTION BETWEEN THREE STATES OF MATTERProperty

(i) Mass (m):The mass of the gas is related to the number of moles asn = w/MWhere  n = number of molesw = mass of gas in gramsM = molecular mass of the gas  (ii) Volume (V): Since gases occupy the entire space available to them, therefore the gas volume means thevolume of the container in which the gas is enclosed.Units of Volume: Volume is generally expressed in litre (L), cm3 & dm31m3 = 103 litre = 103 dm3 = 106 cm3.(iii) Pressure:Pressure of the gas is due to its collisions with walls of its container i.e. the force exerted by the gas per unit area on the walls of the container is equal to its pressure. 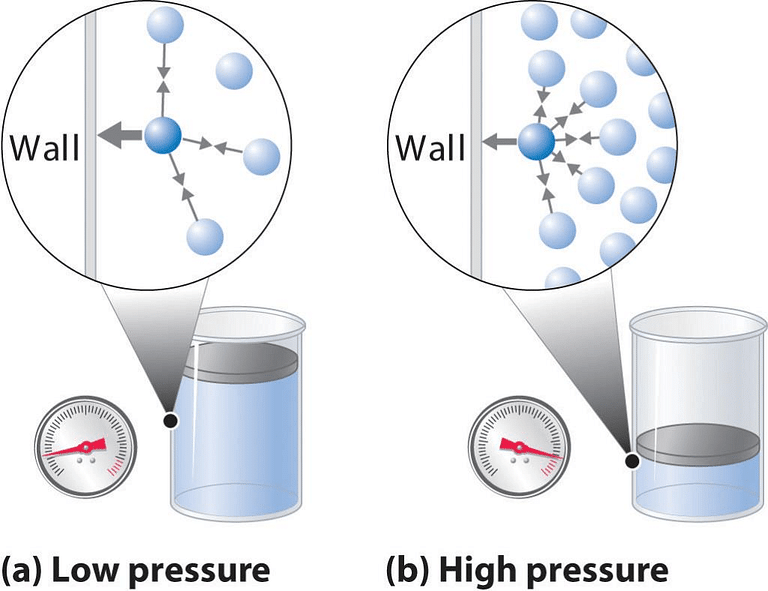 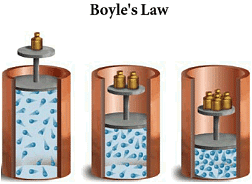 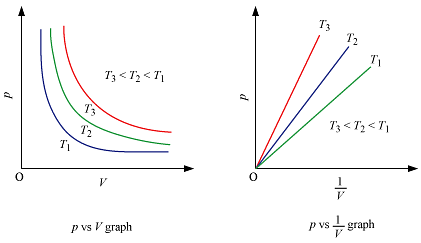 A plot of P (or V ) versus PV at constant temperature for a fixed mass of a gas is a straight line parallel to the PV axis. 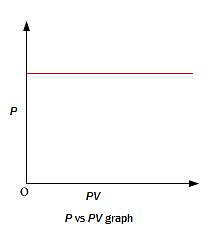 (ii) Charles’ Law:"At constant pressure, the volume of a given mass of a gas is directly proportional to its absolute temperature”

Graphical Representation of Charles’s Law :(i) For a definite mass of the gas a plot of V vs T (oK) at constant pressure is a straight line passing through the origin. 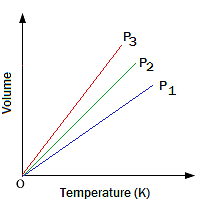 (iii) Combined Gas Law:- This law states that “at constant volume, the pressure of a given mass of a gas is directly proportional to its absolute temperature”.the combination of Boyle’s Law and Charles’ Law:

Where,P = Pressure of GasT= Absolute TemperatureIf the pressure and temperature of a gas changes from P1 & T1 to P2 & T2 , volume remaining constant , we have

5. Avogadro Law:“Samples of different gases which contain the same number of molecules (any complexity, size, shape) occupy the same volume at the same temperature and pressure”.

It follows from Avogadro’s hypothesis that Vαn (when T and P are constant).Mathematically

Maxwell proposed the term Urms as the square root of means of square of all such velocities.

It is the velocity which is possessed by maximum no. of molecules.

Where k is the Boltzmann constant (k = R / N)GRAHAM’S LAW OF DIFFUSION/EFFUSION(i) Diffusion: ability of a gas to spread and occupy the whole available volume irrespective of other gases present in the container(ii) Effusion: process by which a gas escapes from one chamber of a vessel through a small opening or an orifice

DEVIATION FROM IDEAL GAS BEHAVIORFor ideal gas,Compressibility factor i.e. Z = PV/nRT =1For non-Ideal gas, Z ≠1Thus for non-ideal gas,Z can be < 1 or > 1When Z < 1, it is a negative deviation. It shows that the gas is more compressible than expected from ideal behaviour.When Z > 1, it is a positive deviation. It shows that the gas is less compressible than expected from ideal behaviour.(i) Causes of deviation from ideal behaviour:The volume occupied by gas molecules is negligibly small as compared to the volume occupied by the gas.The forces of attraction between gas molecules are negligible.(ii) Van der waals Equation:

Where,a and b are van der waals constants.At low pressures:PV = RT – a/V  orPV < RTThis accounts for the dip in PV vs P isotherm at low pressure 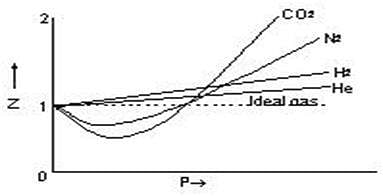 a/V2  may be neglected in comparison with P. The Vander Waals equation becomesPV = RT + PborPV > RTThis accounts for the rising parts of the PV vs P isotherm at high pressures 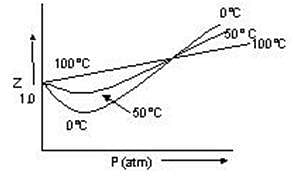 Boyle’s Temperature (Tb): temperature at which real gas obeys the gas laws over a wide range of pressure.Tb = a / Rb = 1/2 T1LIQUEFACTION OF GASES