The document Notes | EduRev is a part of the JEE Course NEET Revision Notes.
All you need of JEE at this link: JEE

Bond Fission:(a) Homolytic fission: Each atom separates with one electron, leading to the formation of highly reactive entities called radicals, owing their reactivity to their unpaired electron.(b) Heterolytic fission: One atom holds on to electrons, leaving none for the other, the result in the above case being a negative and positive ion, respectively, the result being the formation of an ion pair.Reactions involving radicals tend to occur in the gas phase and in solution in non-polar solvents, and to be catalyzed by light and by the addition of other radicals.  Reactions involving ionic intermediates take place more readily in solution in polar solvents, because of the greater ease of separation of charges therein and very often because of the stabilization of the resultant ion pairs through solvation. 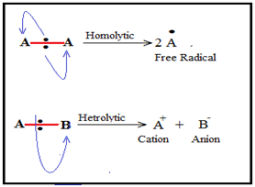 D and L configuration:(a) The configuration of an enantiomer is related to a standard, glyceraldehydes.Order:  +NH3NO2 > F > COOH > Cl > Br > I > OH > C6H5(b) Positive Inductive Effect (+I): This is due to electron-releasing group (Y). It develops an negative charge on the chain and is said to exert a positive inductive effect denoted by (+I)

Mesomeric Effect or Resonance Effect:In conjugated systems, p-electrons shifting takes place consecutively giving permanent polarity on the chain.  (a) Positive Mesomeric Effect (+M):  A group or atom is said to have +M effect whenthe direction of electron -displacement is away from it.

(b) Negative Mesomeric Effect (–M): A group or atom is said to have +M effect when the direction of electron -displacement is toward it. 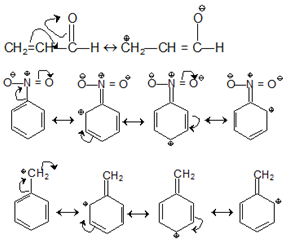 (c) Resonance Energy: The difference in energy between the hybrid and the most stable canonical structure is  called as Resonance energy 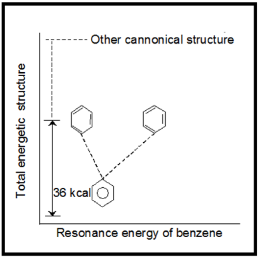 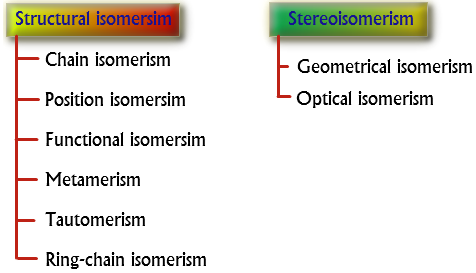 Geometrical Isomerism:The isomers possess the same structural formula containing a double bond and differ only in respect of the arrangement of atoms or groups about the double bond.This isomerism is shown by alkenes or their derivatives in which two different atoms or groups are attached to each carbon containing the double bond.Thus the compounds having the formula abC = Cxy or the simple structure abC = Cab occur in two forms and exhibit geometrical isomerism. 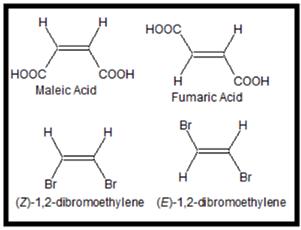 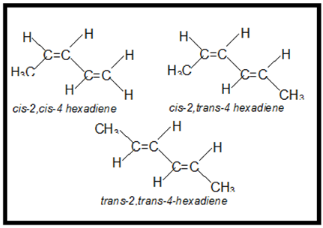 Optical Isomerism:(a) Optical Activity: The property of a substance of rotating the plane of polarized light.(b) Specific Rotation: The number of degrees of rotation observed when light is passed through 1 decimeter (10 centimeters) of its solution having concentration 1 gram per milliliter.

Chirality:(a) All organic compounds which contain an asymmetric carbon (C* abde) atom are chiral and exist in two tetrahedral forms.(b) A molecule must have chirality in order to show optical activity.Enantiomers: Two optical isomers which are non superimposable mirror images of each other. 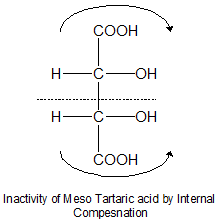 The force of rotation due to one half of the molecule is balanced by the opposite and equal force due to the other half. The optical inactivity so produced is said to be due to internal compensation. It occurs whenever a compound containing two or more

Fischer Projections:(a) Representing three dimensional structures on a two dimensional surface.(b) Asymmetric carbon atom drawn in a prescribed orientation and then projected into a planar surface.(c) Planar formulas of the asymmetric carbon are obtained by placing it so that the two substituents are horizontal and project out towards the viewer (shown by thick wedge-like bonds), while the two other substituents are vertical and project away from the viewer (shown by dotted bonds). 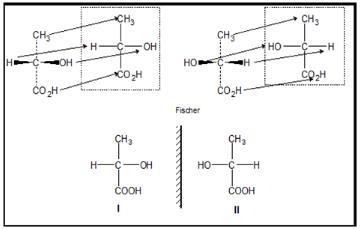 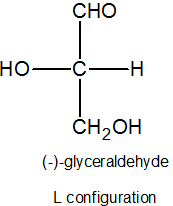 R and S System:The sequence rules to determine the order of priorities of groups are :The atoms or groups directly bonded to the asymmetric carbon are arranged in order of decreasing atomic number and assigned priority 1, 2, 3, 4, accordingly(a) Thus in chlorobromofluoromethane (CHClBrF), the substituents Br (at no = 35), Cl     (at no = 17), F (at no = 9) and H (at no = 1) give the order of priorities.

(b) When two or more groups have identical first atoms attached to asymmetric     carbon, the priority order is determined by considering the atomic numbers of the   second atoms; and if the second atoms are also identical the third atoms along the chain are examined.(c). If the first atoms of the two groups have same substituents of higher atomic number, the one with more substituents takes priority.Thus ––CHCl2 has a higher priority than ––CH2­Cl.(d) A doubly or triply bonded atom 'A' present in a group appended to asymmetric carbon, is considered equivalent to two or three singly bonded 'A's, respectively. Thus, R= A equals A-R-A.If in a molecule, order of priority for groups a,b,c,d, & e is  a > b > d > e 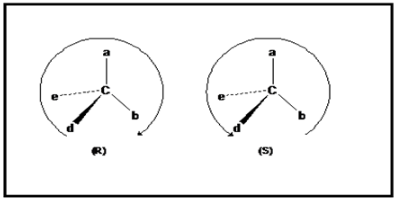