The entire positive charge and nearly the entire mass of atom is concentrated in a very small space called the nucleus of an atom.The nucleus consists of protons and neutrons. They are called nucleons.

The atoms of an element having same atomic number but different mass numbers. are called isotopes.e.g., 1H1, 1H2, 1H3 are isotopes of hydrogen.

The atoms of different elements having same mass numbers but different atomic numbers, are called isobars.e.g., 1H3, 2He3 and 10Na22, 10Ne22 are isobars.

The atoms of different elements having different atomic numbers and different mass numbers but having same number of neutrons, are called isotones.e.g., 1H3, 2He4 and 6C14, 8O16 are isobars.

Atoms having the same mass number and the same atomic number but different radioactive properties are called isomers,

The force acting inside the nucleus or acting between nucleons is called nuclear force.Nuclear forces are the strongest forces in nature.

According to the Yukawa, the nuclear force acts between the nucleon due to continuous exchange of meson particles.

The phenomena of disintegration of heavy elements into comparatively lighter elements by the emission of radiations is called radioactivity. This phenomena was discovered by Henry Becquerel in 1896.

Radiations Emitted by a Radioactive ElementThree types of radiations emitted by radioactive elements(i) α-rays(ii) β-rays(iii) γ – raysα-rays consists of α-particles, which are doubly ionised helium ion.β-rays are consist of fast moving electrons.γ – rays are electromagnetic rays.[When an α – particle is emitted by a nucleus its atomic number decreases by 2 and mass number decreases by 4.

When a β -particle is emitted by a nucleus its atomic number is Increases by one and mass number remains unchanged.

Half-life of a Radioactive Element

The time is which the half number of atoms present initially in any sample decays, is called half-life (T) of that radioactive elementRelation between half-life and disintegration constant is given byT = log2e / λ = 0.6931 / λ

Average life or mean life (τ) of a radioactive element is the ratio of total life time of all the atoms and total number of atoms present initially in the sample.

Activity of a Radioactive Element

The activity of a radioactive element is equal to its rate of disintegration.

The process of the splitting of a heavy nucleus into two or more lighter nuclei is called nuclear fission.When a slow moving neutron strikes with a uranium nucleus (92U235), it splits into 56Ba141 and 36Kr92 along with three neutrons and a lot of energy.

The main parts of a nuclear reactor are following 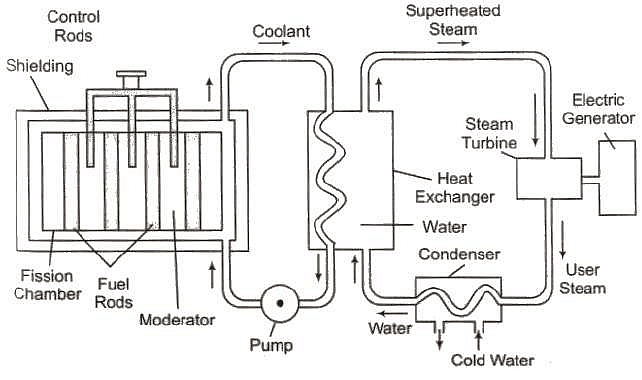 (i) Fuel Fissionable materials like 92U235, 92U238, 94U239 are used as fuel.(ii) Moderator Heavy water, graphite and beryllium oxide are used to slower down fast moving neutrons.(iii) Coolant The cold water, liquid oxygen, etc. are used to remove heat generated in the fission process.(iv) Control rods Cadmium or boron rods are good absorber of neutrons and therefore used to control the fission reaction.Atom bomb working is based on uncontrolled chain reaction.

The process of combining of two lighter nuclei to form one heavy nucleus, is called nuclear fusion.Three deuteron nuclei (1H2) fuse, 21.6 MeV is energy released and nucleus of helium (2He4) is formed.

The document Revision Notes: Nuclei Notes | Study Physics For JEE - JEE is a part of the JEE Course Physics For JEE.
All you need of JEE at this link: JEE
Join Course